It's been the #1 diet for years with good reason.

Health experts have been hailing the Mediterranean Diet as the holy grail of nutrition for the last few years. Inspired by the flavors and cooking methods of the countries bordering the Mediterranean Sea, the diet has been found to fight inflammation, promote heart health, reduce the risk of cancer, improve longevity, and keep the brain sharp. Now, according to new research, the diet can also reduce the risk of frailty that comes with aging.

According to the new study, published in the journal Gut, the diet's emphasis on fruits and veggies, healthy fats, and whole grains boosts beneficial gut bacteria linked to improved brain function, memory, and a lower risk of becoming frail—which, in older adults can include chronic low-grade inflammation, the development of chronic diseases like diabetes, and issues with mobility.

Researchers tracked 612 people aged between 65 to 79 years old from five European countries—the United Kingdom, France, the Netherlands, Italy, and Poland—who were either frail or on the cusp of frailty, when the study began. Half of the participants were instructed to follow a strict diet based on the principles of the Mediterranean diet, eating an ample amount of vegetables, legumes, fruits, nuts, olive oil, and fish, and small amounts of red meat, dairy products, and saturated fats. The other half continued to eat the way they normally did.

Researchers found that those who stuck to the diet for a year had a lower diversity of bacteria in the gut microbiome—aka, microorganisms that live in the gastrointestinal tract—at the end of the study. They also experienced a growth of good bacteria previously found to lower the risk of frailty, boost brain activity, and improve memory. Researchers also found that the participants' nationality or microbiome composition at the start of the study had no influence on the results.

"Our findings support the feasibility of improving the habitual diet to modulate the gut microbiota which in turn has the potential to promote healthier aging," wrote the study authors.

Study co-author professor Paul O'Toole, PhD, head of the school of microbiology at the University College Cork, Ireland, explains to Health that the Mediterranean diet ultimately “provides nutrients linked to health that are absent in a typical processed western diet." He also says that the diet “stimulates the growth of gut microbes" which can turn down inflammation in the body, allowing the immune system to have a better fighting chance against disease and response to vaccines.

Is the Nordic Diet Really Healthier Than the Mediterranean Diet? A Nutritionist Weighs

However, the process of “re-wiring a whole ecosystem” like your gut's microbiome isn’t going to happen overnight, according to to O’Toole. Instead it takes about six months to one year to make a difference. “We previously tried to improve the gut microbiome over 6 months with 5 prebiotics and the effects were modest,” he continues. “The Mediterranean Diet for a full year gave much stronger effects.”

The Mediterranean Diet has been ranked the best diet in the world for three years straight by US News and World Report. David Katz, MD, founding director of the Yale University Prevention Research Center and one of 25 judges on the panel, explained that the “hallmarks of a 'best' diet include balance, maintainability, palatability, family-friendliness, sustainability, along with healthfulness,” and that the “Mediterranean diet gets checkmarks in all of those boxes.”

In addition to nabbing the ultimate top honors, it also landed the top spot in four other categories, Best Diets for Healthy Eating, Easiest Diets to Follow, Best Diets for Diabetes and Best Plant-Based Diets. 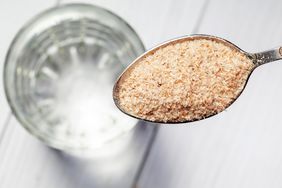