Doctor-approved ways to help you avoid that painful, burning sensation when you go.

For women in particular, urinary tract infections are all too common—and once you've had one (and have experienced the constant need to pee and the burning sensation that comes along with it), you become determined to make sure you never have another.

The bad news: If you've already had a UTI, you're more likely to have another. According to the American Academy of Family Physicians, 30%–44% of women develop a second UTI within six months of their first one. Luckily, there are still steps you can take to help prevent a UTI—and that begins with understanding (and avoiding) the habits that put you at risk.

The main cause of a UTI is when bacteria makes its way into your urinary tract, through your urethra (aka, the tube that allows urine to pass out of your body). So one way to make sure you lower your risk of a UTI is to make sure you're passing urine in a timely manner. Basically: When your body gives you the signs that it's time to go, don't wait.

"Every time you go to the bathroom, you're flushing bacteria from your system," Michael Herman, MD, urologist and director of urologic oncology at Mount Sinai South Nassau, tells Health. "It's important to try not to hold your bladder too much. We advise people to go to the bathroom every four to six hours so bacteria doesn't have a chance to grow in the bladder."

That also means that older adults and people with disabilities who have mobility challenges may need some extra help getting to the restroom regularly to prevent a UTI. You might also need to remind your kids or other little ones in your care, who might not recognize when nature calls, to go pee throughout the day.

Staying hydrated delivers a double blow against potential UTIs. Not only does filling your bladder help you pee more frequently, it also dilutes you urine—an additional benefit for keeping bacteria at bay.

"If you're well hydrated and go to the bathroom regularly, it never gives bacteria an opportunity to grow and proliferate and cause that infection," explains Dr. Herman.

A 2018 study published in JAMA Internal Medicine backs this up: When trying to figure out how to prevent UTIs, researchers looked at women who had recurrent bladder infections. They found that women who upped their fluid intake by an additional 1.5 liters of water each day for a year developed significantly fewer UTIs than those who didn't change their water consumptions.

While the study did not conclude exactly how much water you need to prevent a UTI, the Office on Women's Health (OWH) recommends drinking six to eight glasses of fluid per day, so if you're prone to UTIs, it may be a good idea to keep your favorite water bottle close by.

Wipe from front to back

Women are taught to wipe front to back in childhood for a reason: It's because the main bacteria that causes UTIs—Escherichia coli (E. coli)—hangs out around the anus. It doesn't usually cause harm back there, but when it's accidentally pushed toward the front (say, on a piece of toilet paper), it can travel up the urethra and create a full-blown infection in your bladder.

"Wiping from front to back is absolutely important for preventing UTIs," says Dr. Herman. The mantra is also important to remember when you're on diaper duty to help prevent a UTI in toddlers, or anyone you're tasked with caregiving.

Pee before and after sex

Having sex strongly increases the risk of a UTI among people with a vagina. All that thrusting sometimes accidentally moves bacteria into your urethra. Plus, since women's urethras are much shorter than men's, bacteria practically have a short cut to the urinary tract, which explains why women get UTIs 30 times more frequently than men, according to the OWH.

But you don't necessarily need to swear off sex to prevent a UTI. Peeing both before and after you do the deed can help keep bacteria out of your urinary tract—and help you prevent a full-blown UTI.

Even better news: You don't need to make a beeline to the bathroom the moment you both finish. "We tell people to go to the bathroom within 30 to 45 minutes of having sex if they're prone to UTIs," says Dr. Herman.

Before we dive in, it's important to know that the research on using cranberry juice to prevent UTIs is mixed, but there's a chance that taking cranberry could help. Compared with the tart juice, cranberry supplements contain a concentrated amount of a substance called proanthocyanidin (PAC) that may make it difficult for bacteria to stick to your bladder, thus reducing the risk of a UTI, according to a comparative study in the journal Phytochemistry.

One systematic review from 2017—this time published in the Journal of Urology—found that cranberry products can significantly reduce the occurrence of UTIs, especially for those prone to the infections. But not all research was so promising: A 2014 randomized controlled trial published in the Journal of the American Geriatrics Society found that, in a setting of a long-term care facility, supplementation of cranberry capsules did not reduce the risk of UTI in low-risk individuals, as compared to placebo. (The capsules were, however, able to reduce the incidence of clinically-defined UTI in high-risk individuals.)

While the consensus is still out, doctors still may recommend cranberry supplements to those at a higher risk of developing UTIs. "I do recommend cranberry extracts. It's a more effective way of concentrating the PAC into the urine, compared with juice, and there's no downside to it," Courtenay Moore, MD, urologist at The Ohio State University Wexner Medical Center, tells Health.

After a slight dip in middle age, the risk of a UTI actually increases as you get older. That's because menopause throws your hormones out of whack, which makes it easier for bacteria to invade your urinary tract. "After menopause, the tissue around the urethra gets dryer and becomes an easier place for bad bacteria to grow, and less hospitable to good bacteria," explains Dr. Herman.

Estrogen replacement therapy may be one way to prevent UTIs in older women, though. It helps bolster your lower urinary tract's mucus—a prime defense against bacteria—possibly by promoting the growth of healthy bacteria, according to research in Science Translational Medicine.

That said, hormone replacement therapy can come with some pretty significant risks, according to the US National Library of Medicine (MedlinePlus). For some women, the therapy may increase their chances of getting blood clots, heart attacks, strokes, breast cancer, and gallbladder disease. That's why it's essential for women to talk with their doctor about whether hormone replacement therapy is the right option to tackle their specific health issue.

Depending on which type of contraception you use, your birth control might be creating a breeding ground for the bacteria that causes UTIs. Specifically, spermicides put you at a higher risk for these infections, per the OWH. Diaphragms, too, may increase the risk of UTIs, according to Nemours Children's Health.

"The vagina area is full of good bacteria, and that good bacteria usually crowds out bacteria commonly associated with UTIs. Spermicidal lubricants or jelly can interfere with the pH balance of the vagina and promote the growth of bad bacteria over good bacteria," explains Dr. Herman.

If UTIs have become a persistent problem in your life, it may be a good idea to talk to your ob-gyn about potentially switching birth control to see if it might help.

If you've got a stash of douching supplies and feminine hygiene sprays hanging out in your bathroom, you should consider tossing them out, per the OWH—they can disrupt the balance of good bacteria in your vagina and create a more hospitable environment for the germs that cause UTIs.

But it's not just douching supplies: "Even bubble baths can be a little bit of an irritant to vaginal mucosa," adds Dr. Herman.

The main thing to remember about vaginal hygiene: Warm water is all you need when washing your vulva, according to the Cleveland Clinic (your vagina is self-cleaning, after all). You can help prevent potential UTIs by keeping it simple down there, avoiding harsh chemicals when cleaning and caring for your vagina.

7 Things Every Woman Should Know About UTIs 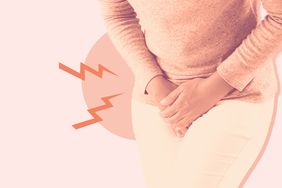