These exams, tests, and procedures may be used to confirm, or rule out, a cancer diagnosis.

Detecting and diagnosing uterine cancer—meaning any cancer that starts in the uterus—isn't one-size-fits-all; there are several different ways the disease can be ID'd.

If your doctor suspects you have uterine cancer because of symptoms you are having or some other finding (say, some usual discharge or a swollen stomach), that's when the diagnostic journey begins. Depending on a variety of factors, including signs and symptoms and your general health, your doctor may order various tests and procedures, notes the American Society of Clinical Oncology.

Uterine cancer diagnosis typically starts with a physical exam, Ursula Matulonis, MD, chief of the division of gynecologic oncology at Dana-Farber Cancer Institute, tells Health. The point of this exam is for the doctor to get a general gauge on your health and look for signs of disease, like unusual lumps.

The doctor will also likely ask about your medical history, including what sicknesses and treatments you've previously had, as well as your current health practices, per the National Cancer Institute (NCI).

The physical exam often includes a pelvic exam as well, which is basically an inspection of the vagina, cervix, uterus, fallopian tubes, ovaries, and rectum, says NCI.

Your ob-gyn or another health care professional will conduct the exam, per the American College of Obstetricians. This involves placing a gloved finger or two inside your vagina and pressing the other hand over your stomach to feel your uterus and ovaries. Your doctor may also place a gloved-and-lubricated finger inside your rectum to check for lumps or other odd growths.

A Pap test may be part of a pelvic exam as well.

Also called a Pap smear, a Pap test involves taking a sample of cells from your cervix or vagina and then looking at them under a microscope to see if they are normal or not.

Important caveat: Doctors don't use Pap tests as a way to screen for uterine cancer, notes the NCI. But occasionally a Pap test can reveal abnormalities in the tissue that lines the uterus, in which case a doctor may order more exams to see if those abnormalities are uterine cancer.

A uterine biopsy is a quick, easy, in-office procedure that can generally give you a bottom-line answer about whether you have cancer or not, Pamela Soliman, MD, professor and deputy chair of Gynecologic Oncology and Reproductive Medicine at the University of Texas MD Anderson Cancer Center, tells Health.

Here's how it typically works: A doctor uses a speculum to open up the vagina and look at the opening of the uterus. A thin plastic straw inserted inside the uterus is used to collect cell samples, says Dr. Soliman. In the moment, this procedure can cause menstrual-like cramps, but the cramping typically stops as soon as the procedure is done, and "most people feel fine afterwards," she says. From there, the sample is sent to a lab where the cells are studied under a microscope to see if they are cancerous.

In this procedure, a thin, lighted instrument (called a hysteroscope) is threaded through the vagina and cervix and into the uterus, says NCI. A camera on the tip of the scope allows the doctor to inspect your uterus. The doctor may also take a tissue sample (aka a biopsy) for analysis under a microscope, according to MSKCC.

A biopsy may not always be able to answer the question of whether you have cancer, either because it didn't collect enough cells or the results were inconclusive, explains the American Cancer Society (ACS). When that happens, your doctor may recommend a test called dilation and curettage. Also known as D&C, this procedure involves dilating the cervix and inserting a curette (spoon-shaped instrument) into the uterus to remove tissue, per the NCI. The tissue samples are then inspected under a microscope for signs of cancer.

Ultrasound uses sound waves to create an image of your reproductive organs, says ACS. In the case of uterine cancer, doctors may use a specific type known as a transvaginal ultrasound to examine the vagina, uterus, fallopian tubes, and bladder, says the NCI. A probe placed put inside the vagina allows the doctor to see what your surrounding tissues and organs look like. 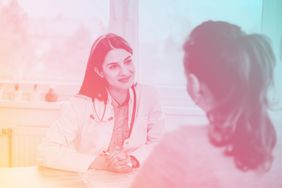