Ulcerative colitis is a form of inflammatory bowel disease. According to the NIH, it affects more than 750,000 people in North America—and 24-year-old Jillian Kotzer, who lives in Vancouver, is one of them.

In a TikTok video and in an interview with Health, Kotzer details her battle with the disease, which began when she was 17. The first signs, she says in the video, included "really bad stomach cramps" and "pooping out blood." After ignoring her symptoms and losing a lot of weight without knowing why Kotzer realized she needed to see a doctor. "[I] was literally pouring blood out of [my] butt every single time [I] went to the bathroom," Kotzer says on TikTok.

After undergoing a colonoscopy, a diagnostic tool that allows doctors to view the large intestine by putting a thin scope with a camera in the rectum, she was diagnosed with ulcerative colitis. This chronic condition causes inflammation and ulcers in the digestive tract that typically lead to diarrhea, pain, and rectal bleeding, among other symptoms. Ulcerative colitis is possibly due to an immune system malfunction. "Your large intestine is basically dead," Kotzer recounts doctors telling her.

After two years of taking medication to treat the condition to no avail, Kotzer ultimately had to have surgery to remove her large intestine. Doctors replaced it with a surgical opening leading to an ostomy bag, which hangs outside her body and fills with waste.

"Sitting in a hospital bed and trying so many different medications while still being in pain was no way to live," Kotzer tells Health, about her decision to undergo surgery. Unfortunately, that wasn't the end of her battle with the disease.

RELATED: Foods To Avoid If You Have Ulcerative Colitis

"Everything was fine and great until three years later, [when] I had to have my rectum removed," Kotzer says, adding that surgeons also stitched her anus shut during the procedure. This second surgery was a precautionary measure so she wouldn't develop colorectal cancer, which people with ulcerative colitis have a higher overall risk of.

RELATED: The Colorectal Cancer Symptoms You Need To Know, Even If You're Young

Despite the hard recovery, Kotzer is significantly happier now. "Before, I was always in pain and had to watch what I eat and go to the bathroom multiple times a day," she says. "Now I have so much freedom because I have no pain at all and my stomach goes to the bathroom whenever it wants to [because of my ostomy bag]. I never have to worry about finding a bathroom."

Despite stares and questions about her ostomy bag, Kotzer doesn't feel the need to hide it. "When I go on vacation, I'm not afraid to show it because I feel that if I hide it and make it weird, other people will make it weird," she explains. "So I act like it's totally normal."

Kotzer decided to share the TikTok video, which has racked up more than 460,000 viewers, because she didn't want to be embarrassed about her story, and she hoped no one else with ulcerative colitis would be, either.

RELATED: This Woman Spent Years Hiding Her 2 Ostomy Pouches—Then She Realized She Was Beautiful Just the Way She Is

"I would hate to see somebody else wait so long to address their symptoms or hide them because they're embarrassed," she says. "I want to show people that you can have a completely normal life and be happy with [an ostomy bag]." 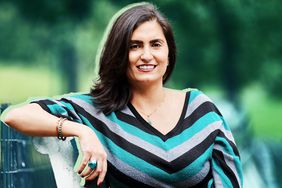