Ulcerative colitis is a type of inflammatory bowel disease (IBD) that causes inflammation and ulcers in the lining of the large intestine, colon, and rectum.

It can cause pain, bloating, and diarrhea during flare-ups, and often few or no symptoms between episodes.

Legumes and beans are high in fiber and can cause gas, so they're not an ideal food for someone having an ulcerative colitis flare.

"But they're still an important staple in many diets, especially for vegetarians and vegans," said Julie Cepo, a registered dietitian and coauthor of the Crohn's & Colitis Diet Guide.

Try different preparations and smaller portions, said Cepo. For example, rinsing canned beans well, or removing the outer coating of chickpeas, or pureeing them into hummus can make these foods more easily tolerated.

Coffee has a reputation for fueling bathroom breaks even in people without IBD, and it can make symptom management especially difficult for people living with ulcerative colitis.

The same goes for tea and other caffeinated beverages as well as products with guarana, a stimulant often found in energy drinks.

If you are lactose intolerant, eating dairy can cause IBD-like symptoms. But that doesn't mean everyone with colitis should steer clear of milk.

"Most people think they are automatically lactose intolerant if they have colitis, and that's not true," said Sunanda Kane, MD, professor of gastroenterology at the Mayo Clinic, in Rochester, Minn. "Lactose intolerance has to do with how much of a specific enzyme you have. And the only way to know is if you do an experiment where you drink a glass of milk and then see if you feel worse afterward."

High-fiber, stringy vegetables like broccoli, Brussels sprouts, cabbage, and celery are not easily digested and can cause gas, bloating, and cramping in people with ulcerative colitis.

You may be able to tolerate these foods if they're well cooked and chopped into small pieces, but if not, consider an alternative. "We like to focus on what people still can have," said Cepo, who works with IBD patients at Mount Sinai Hospital, in Toronto. "Cooked string beans, cooked cauliflower, well-cooked carrots, and sweet potatoes, for example."

If you are having an ulcerative colitis flare-up, avoid eating whole seeds. It helps if you even steer clear of the tiny fruit seeds (such as those found in berries) in the fruit itself, as well as in smoothies, jams, and yogurts made with real fruit.

Seeds are generally not a problem, though, if they're ground finely enough, Cepo said. Her patients have never had issues with ground flaxseed, for example, or tahini, which is made from a sesame-seed paste.

It's hard to digest corn or mushrooms, said Dr. Kane. "We eat it, we chew it, but for the most part, those corn kernels are still going all the way through your whole." This can cause GI irritation and diarrhea in those with ulcerative colitis, so many choose to avoid these during a flare-up.

Dr. Kane recommended that patients with IBD follow a low-residue diet while they are experiencing symptoms; this means avoiding anything that won't digest totally, such as corn, mushrooms, roughage like broccoli and cabbage, and small, hard foods like seeds and nuts.

When it comes to ulcerative colitis symptoms, very fatty meats can be bad news.

Choose leaner cuts of meat, and remember that the more thoroughly you chew it, the less likely it will make your symptoms worse, said Cepo: Meat in ground form—like in meatballs, meat sauce, or meatloaf—is generally easier to tolerate than a tough cut of steak, for example.

"People get this idea that if they have colitis, they have to eat a soft, bland diet, but spice isn't necessarily going to cause a problem," said Dr. Kane. "People who follow Korean diets with colitis, for example, still eat a very spicy diet."

Powders and finely ground spices can be incorporated successfully into your diet, said Cepo. But if you are cooking with fresh or dried herbs, like whole parsley and cracked peppercorns, chop or mince them finely so they are easier to tolerate, she says. If you have a bad reaction, cut back until you find an amount you can tolerate.

Some people report problems with peanut butter, which is rich in healthy fats, too.

Sugar and caffeine, two of chocolate's most prominent ingredients, can both contribute to cramping and increase stool frequency in people with ulcerative colitis, especially during a flare-up.

"I see it as a portion-size issue," said Cepo. "If you enjoy chocolate and you want to keep it in your diet, most people can stick with a small piece of good-quality chocolate and be just fine."

Different types of alcohol may affect you in different ways, but in general, they can stimulate your intestine and trigger diarrhea. You may be able to have moderate amounts, however.

Cepo's patients tend to tolerate white wine better than red, and often experience gas and bloating if they drink beer or carbonated beverages.

It's better to drink something with a meal rather than on an empty stomach, and she recommends that people try new drinks (or foods) at home first, rather than out at a bar or in a social setting.

Like seeds, nuts that aren't ground up or broken down well enough can cause discomfort both during digestion and bowel movements. But (unless you have an allergy), you don't have to give up those healthy fats completely even with ulcerative colitis: Nuts that are ground into smooth nut butters are generally OK, said Cepo.

"Spread it on crackers, breadsticks, put it in smoothies," Cepo explained. And for some people, just thorough chewing before swallowing can be sufficient. "The smaller the pieces are going down, the less likely you are to have any issues."

Cola and other carbonated beverages pack a double whammy: Not only do most contain caffeine and sugar or artificial sweeteners, which can increase gas and bowel production, but the bubbles can also cause cramping and make you feel bloated.

If you're going to drink soda, limit your quantities and skip the straw, which can introduce more air bubbles into your GI tract, said Cepo.

Onions are another "stringy" vegetable and they tend to be difficult to digest especially for people with ulcerative colitis, said Cepo.

"People seem to do better with onions when they're chopped or minced very small, or cooked well," Cepo added. "Or we tell them to use it to flavor their foods, like soup, and then strain out the actual onion if needed." 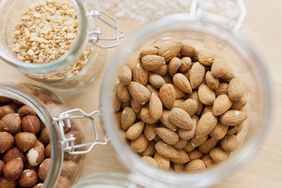 Foods to Avoid If You Have Crohn's Disease