What causes constipation? Well, the obvious culprits include a low fiber diet, repeatedly ignoring the urge to go, not drinking enough water, or a lack of exercise. Here are 13 possible causes of constipation you may not have considered.

What causes constipation? Well, the obvious culprits include a low fiber diet, repeatedly ignoring the urge to go, not drinking enough water, or a lack of exercise.

But constipation also has other, less-well-known causes, including certain medications and supplements, as well as potentially serious medical conditions.

What's causing your gut trouble? Here are 13 possible causes of constipation you may not have considered.

Is Your Poop Healthy? The Bristol Stool Chart Shows What It Should Look Like
02 of 13

Painkillers, specifically narcotics, can cause constipation.

"A lot of receptors for the narcotic class of drugs are in the digestive tract, so it tends to bring everything to a halt," says Thomas Park, MD, a gastroenterologist with the University of Rochester Medical Center Park in New York. "In general, it's a good idea for everyone who's placed on one of these drugs to also place them on a gentle laxative like a stool softener."

Some studies (but not all) have suggested that there might be a higher risk of constipation for people who are chronic users of pain relievers like aspirin and ibuprofen.

Can't Poop? Here's Everything You Should Know About Constipation
03 of 13

There's some evidence that chocolate can cause constipation, though other studies show chocolate may actually help some people, Dr. Park says.

In one 2005 study, people with chronic constipation or irritable bowel syndrome were more likely than people without those problems to say that chocolate caused constipation (as did bananas and black tea).

Eliminate or cut back on chocolate if you think it could be causing your constipation.

Vitamins in general won't cause constipation, but certain components, such as calcium and iron, can be a problem.

"I would tell a patient to stop taking the iron [or calcium] unless they really need it and, if they do need it, I would put them on a stool softener to counteract that," says Dr. Ginsburg, who is a spokesperson for the American Gastroenterological Association.

Some laxatives work by stimulating bowel activity. Such stimulant laxatives should be taken only as directed.

If used for long periods of time, stimulant laxatives can lead to dependence, meaning your body simply won't function properly without them.

Stimulant laxatives include Dulcolax, Ex-Lax, Senna, and others.

Don't take any medication—including laxatives—for longer than instructed by either the product's label or your doctor.

A diet high in cheese and other low-fiber/high-fat foods such as eggs and meat can slow down your digestion. The obvious solution? Cut down on your intake of such foods, and increase fiber intake to 20 to 35 grams a day.

"If you're going to have cheeses and red meat and eggs, mix in some salads or other foods that have fiber," Dr. Park advises. And avoid fast foods and processed foods, which are generally low in fiber.

Chronic diarrhea is a common symptom of both. However constipation can be a problem too.

10 Things That Can Cause Diarrhea
Was this page helpful?
Thanks for your feedback!
Tell us why!
Related Articles 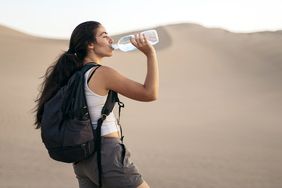