How to Avoid Diabetic Foot Amputations

In people with diabetes, a trifecta of trouble can set the stage for amputations. Numbness in the feet due to diabetic neuropathy—nerve damage—can make people less aware of injuries and foot ulcers. These ulcers or injuries may fail to heal, which can, in turn, lead to serious infections.

"Normally a person with an injury on the bottom of their foot, such as a blister, will change the way they walk. Your gait will alter because you are going to protect that blistered spot until it heals up," says Joseph LeMaster, MD, a full Professor and Director of the Research Division of the Department of Family Medicine and Community Health at the University of Kansas Medical Center.

"People with a loss of sensation—numbness—don't do that. They will just walk right on top of that blister as though it wasn't there. It can burst, become infected, and turn into what we call a foot ulcer," he says. "That ulceration can go right down to the bone and become an avenue for infection into the whole foot. That's what leads to amputations."

About 15% of all diabetics will develop a foot ulcer at some point and up to 24% of people with a foot ulcer need an amputation. You're at extra-high risk if you're Black, Hispanic, or Native American. These minority populations are two to three times more likely to have diabetes than non-Hispanic whites, and their rates of amputation are higher.

"It's the most common reason that someone's going to be hospitalized with diabetes—not for high blood sugar or a heart attack or a stroke," says David G. Armstrong, DPM, Professor of Surgery and Director, Southwestern Academic Limb Salvage Alliance in Los Angeles. "It's for a hole in the foot, a wound."

About a year ago, Dr. Armstrong treated a 59-year-old man with type 2 diabetes who had been working out at a local health club; 12 hours later, he discovered a screw from a piece of gym equipment lodged in his foot.

"This isn't a dummy. He's a sweetheart of a guy," says Dr. Armstrong. "It's just that he doesn't have the gift of pain, and that's what's so profound. Ultimately the man's toes were amputated, but he is able to walk and work out with close monitoring."

"The single most important thing that a person with diabetes can do to prevent a problem is to look at their feet every day, just as they comb their hair or brush their teeth," says Dr. Armstrong. You can use a mirror to examine your feet or have a family member check your feet for you.

An increase in the temperature of your foot, which can be detected with a special infrared thermometer, can be an early sign of trouble. "The foot will get hot before the skin breaks down," says Dr. Armstrong.

In a study published in 2007 of 225 patients, which was conducted by Dr. Armstrong and colleagues, half of the patients checked the temperature in six places on each foot twice daily and half examined their feet visually. If there was more than 4 degrees difference between the left foot, the thermometer-using patients contacted their doctor.

Other Ways To Prevent Foot Problems 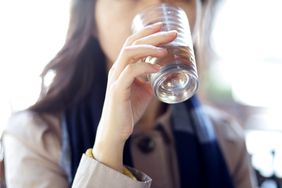 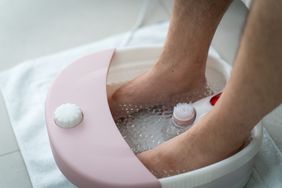