Here's how one woman got both conditions under control.

Growing up, Minnesota native Sarah Ellefson was familiar with anxiety. Her father had battled it throughout most of her childhood. And when she was 18, she found herself dealing with anxiety as well.

"I had my first panic attack at my parents' house," Ellefson tells Health. "My dad really helped me because he knew exactly what I was dealing with.

Ellefson is one of over 6.8 million Americans who will deal with generalized anxiety disorder (GAD) in any given year, according to the Anxiety and Depression Association of America. GAD is characterized by excessive worry about a variety of events or activities, such as work or school. People with GAD find it difficult to control their worrying, which may make it challenging to function professionally and in social settings.

Stress Eating and Other Health Issues

Ellefson's anxiety manifested as stress eating and stomach pain. It wasn't until she was diagnosed with type 2 diabetes, however, that she found healthy ways to manage it.

Her type 2 diagnosis came out of the blue. In January 2012, she was sitting at her desk at her job in health care administration and realized her vision was so blurry, she couldn't make out her coworker's face. "I immediately realized something was wrong and called my doctor," recalls Ellefson.

At the time, she was 28, and she had been dealing with a variety of health issues, including high cholesterol. She'd even been tested for diabetes a few months earlier. The tests were negative, however, and she wasn't experiencing any of the other classic symptoms of diabetes—such as extreme thirst or hunger. So when she sat down with the doctor, she was shocked to learn her blood sugar was 440.

"The doctor basically told me to consider myself lucky," she says. "That it was like I survived a car crash with no seatbelt."

Ellefson was put on four oral medications as well as insulin to help get her diabetes under control. But her anxiety continued to cause major problems. "I was miserable and sad, and I was having panic attacks all the time. I had a period of time after diagnosis, almost a year and a half, where I just didn't know what I was doing."

During this time, she gained over 40 pounds, and her anxiety got the better of her. She wasn't taking care of herself, and she began retreating from social functions. "I basically became a shut in," she explains. "I wasn't seeing friends or going out. My health was just tanking. I was told I might have early signs of kidney damage and I was told to not even attempt to get pregnant."

One day at work, all the issues Ellefson was dealing with came to a head. She began to have a panic attack and ran out of her office. An hour later, she found herself sitting in her car, hyperventilating. "I decided to call a psychologist I found who specialized in anxiety issues. That was really the first step of taking back control and admitting I needed help."

The Magic of Physical Activity

The psychologist helped Ellefson calm down that day and encouraged her to get out of her house, even if it was just to go for a short walk. So that's where she started, just walking to the end of the street, and then around the block. Once she was able to walk around the block, she then conquered a footpath around a nearby lake, each day making a little more progress. But she still needed help—and found it in the support of a coworker.

"I had a friend from work who kept trying to get me to run. At first, I told her I can't run. I'm too overweight. My heart will give out. My joints will hurt," Ellefson remembers. "I had an excuse for everything."

But the friend was persistent. She got Ellefson to sign up for a gym. "Before I knew it, I was training for a 5K and had signed up for a personal trainer, who I still see now, six years later."

Once she became physically active, her panic attacks subsided, and she was more outgoing. "To this day, I don't work out for a calorie burn. I have perfectionist tendencies and can be hard on myself," she says. "Working out, even a 30-minute walk, really helps me calm my mind."

Despite her success at dialing back her anxiety, Ellefson was still a type 2 diabetic, and fitness was only one piece of the puzzle; she still had to figure out how to eat better. That's when she discovered meal prepping.

The Wonders of Eating Better

"I started meal prepping six years ago. I was working long hours, and by the time I got home and worked out, I had no energy to cook food. So it was hard to keep from sliding back into unhealthy eating patterns. Meal prepping helped me set myself up for success."

She tries to keep her meals, which she prepares on Sundays, colorful and nutrient-dense—with half her plate consisting of vegetables and the other half a healthy source of lean protein. Like staying active, meal prepping has become a habit that Sarah sticks with even when she is traveling. "I try to keep it simple. Because I have struggled with emotional eating, I found that if I eat whole, unprocessed foods it really cuts down on cravings. I also really like taking pictures of my meals," she says.

Tackling her mental and physical health paid off. Sarah was able to lose 90 pounds and got off all of her diabetes medications, including insulin.

"Before getting diagnosed with type 2 diabetes and making all these changes, I felt like life was passing me by," she recalls. "I was really low for a long time and to go from that to where I am now…I feel really proud of the progress I've made."

A year after Ellefson was taken off her medications, she became pregnant. While doctors monitored her closely and she went back on insulin halfway through the pregnancy, she was able to maintain her healthy habits. Her son, Ben, was born in 2016.

As she became healthier mentally and physically, she has learned to be kinder to herself. "I still have some of my baby weight. And I'm fine with that. My approach now is to just do the best I can and avoid the perfectionist tendencies that come with my anxiety," she says.

As a working mom, she has also learned the importance of having a strong support system, whether it's the friends she's made through the gym or running, or at home. "I had a setback about a year ago and I had to go back on medication. And it was hard for me to not feel like a failure. I had worked so hard to get where I was," she explains. "My husband saw that I was struggling, so he jumped in and joined me for some of my runs, and now it's something that we all do as a family."

Ben has also started helping her meal prep, and staying healthy has become a family activity.

"I had a doctor tell me that diabetes would be a marathon and not a sprint, and he was absolutely right," she says. "When I first lost the 90 pounds and was able to stay there for a few years, I thought I had everything under control. But diabetes changes. It's a journey. And you can't beat yourself up. You just have to take baby steps." 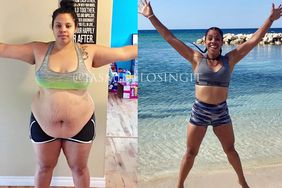