Need insulin? While the medication itself is more than 100 old, there've been many innovations when it comes to ways to take it.

Need insulin? While the medication itself may be old—more than 100 years to be exact—lots of innovations have happened when it comes to ways to take it.

From the old-fashioned needle and syringe to injector pens to pumps, you've got choices to make. There's even a plethora of devices that can help you inject if you have poor vision or mobility issues.

Check out these eight options and talk with your certified diabetes educator to determine which insulin delivery system or injection aids are right for you.

With this type of delivery system, you insert a needle into a vial, draw up the appropriate amount of insulin, and then inject into the subcutaneous space—the tissue just under your skin.

Even though there are other options, needles and syringes are the most common way to administer insulin. Some of the newer insulin injection methods, such as the insulin pen, carry only a preset amount of insulin.

Thinner needles and other advancements, such as syringe magnifiers, have made syringes easier to use.

Make sure not to inject insulin in the same spot every time, but stay within the same area, according to the American Diabetes Association (ADA).

Have poor vision? You're not alone.

According to the ADA, diabetes is the leading cause of new cases of blindness among adults aged 18–64 years.

Needle guides can help you keep the syringe or pen steady at the desired location and at the correct angle both for drawing up insulin out of the vial and injecting.

Some needle guides also come with magnifiers, which help by enlarging the numbers and allowing you to read the fine print and dosages on the syringe.

These devices are another example of innovations designed to help make insulin needles more palatable.

Syringe-filling devices allow a person with diabetes to load a syringe with a simple touch or sometimes to measure out dosages based on a "click" sound, as well as mix two different types of insulin together.

Spring-loaded syringe holders are another way to make insulin needles and syringes easier and less painful to use.

These devices often have push buttons that trigger the plunger, helping you inject. (It's considered an "insertion aid.")

This device is like a large pen that has an insulin-dispensing needle on the end rather than ink. Unlike syringes, insulin pens contain a built-in insulin cartridge that is prefilled with the drug.

You turn a dial to the desired dose, press a plunger, and inject the insulin. (You change the needle before each use).

Once you have used up the insulin, you replace the cartridge. Some insulin pens can be discarded after the cartridge is empty, and replaced with a new pen.

These pens can be easier for people with diabetes-related vision problems, because you have to just turn a dial. Plus, the dial makes a clicking noise as it turns, which can help you measure out fewer units of insulin.

No needle is necessary with insulin jet injectors, which should make them a great choice for those afraid of needles.

Instead, these devices use high pressure to send a fine spray of insulin through the skin.

Great in theory, jet injectors didn't quite take off among people with diabetes. Some say they are more painful than needles, although a June 2020 study published in the journal eClinicalMedicine showed that patients' satisfaction with treatment increased with the use of a needle-free insulin injector, possibly due to less injection-site pain and skin reactions.

These devices deliver insulin all day. The pump is attached to a small tube or catheter with a needle on the end that is inserted in your skin, usually in your abdomen.

About the size of a deck of cards, the pump can be programmed to deliver insulin to cover meals too. "Pumps provide insulin all the time, and then you can give yourself a bolus (dose) every time you eat to keep your blood sugar down," said Saleemah Fahmi, MD, an endocrinologist in Dallas.

Ports use the same sets of tubing that can be used with an insulin pump, but you can use them on their own without the pump.

Basically the catheter is inserted under the skin and stays in place for several days.

Insulin can be injected via the subcutaneous infusion set rather than directly to the skin. Instead of getting multiple skin punctures a day, the user has only one every several days.

These devices are basically insulin pumps that attach directly to the skin; they don't use tubing to deliver the drug.

"Pump patches are wireless, can be applied almost anywhere on the body, and are supposed to be very easy to use and eliminate the need to carry around the big pump," explained Judith Pegg, RN, MSN, CDE, a diabetes educator at Beaumont Hospital in Troy, Michigan.

According to an August 2018 review of several different pump patch devices published in the Journal of Diabetes Science and Technology, these devices were not complex enough for patients with type 1 diabetes and some patients with type 2 diabetes. 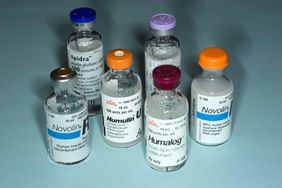 5 Types of Insulin and How They Work