Julie Kiefer was diagnosed with type 1 diabetes at 4 years old—and she soon realized traveling would be difficult with the disease.

From a young age, Julie Kiefer has known the specific frustration of traveling with diabetes. After being diagnosed with type 1 diabetes at 4 years old, Kiefer's first brush with figuring out how to travel with chronic illness came when she found herself unable to accompany her classmates on school trips-all because her teachers felt it was too unsafe.

"They thought it was too dangerous unless my parents paid to have a nurse go with us," Kiefer, now 28, tells Health. This triggered something in her-she decided then and there that she wouldn't talk about it. She thought that if she managed her disease well enough, no one would ever know she had diabetes. "I wanted to show the world I could do whatever I wanted," she says.

Her next experience traveling with diabetes came during family vacation when she was just 10 years old-this time, a positive one. Kiefer met and befriended another child-a little boy-who also had type 1 diabetes. They formed a bond and ended up staying close for the entire trip. "For me, it was wonderful because it was the first time that I felt not alone in having diabetes," she says.

Of course, it wasn't always easy and rewarding like that-and as Kiefer got older, she realized just how difficult it was to travel with diabetes.

"Anytime you travel, you are getting out of your comfort zone," she says, noting that most people just have to worry about language barriers or cultural shifts. "But having diabetes, you also have to think about things like having enough medication for the duration of your trip, and how different climates, or different time zones are going to affect you."

Kiefer remembers one time specifically when something happened that left her unprepared to manage her condition: It was during a trip to Scotland when she accidentally left her insulin on an island that she had no way of getting back to.

"At first it was really scary," she says. "I didn't know what I was going to do and I was really lucky to have my prescription and to be able to find insulin. It showed me how important it is to be prepared all the time."

Kiefer also found herself in a scary situation while traveling in Colombia. "At some point I got sick, and where I was, you weren't able to drink the water from the tap," she says. As her blood sugar dropped, she continued to look for a source of water-and she knew she had to find one fast. "I was so thirsty I ended up boiling water using the coffee machine so that I could drink it," she says.

But Kiefer's experiences have only made her stronger and more knowledgeable about traveling with a chronic illness. Not only has she figured out a specific routine while traveling ("I try to eat at the same time every day and no matter where I am, I make time for some form of exercise") but she's also chosen to help other travelers with diabetes through creating The Diabetic Travelers Network, filling need for that traveling community.

"We only have one life and it's too short to have diabetes be the reason we don't experience it," she says. According to Kiefer, who's been to 28 countries so far, "the more I traveled, the more I realized there was a need for information to help other diabetics."

Initially, The Diabetic Travelers Network started as a Facebook group and has grown to a social impact business with a global community that has connected thousands of people with diabetes with a desire to travel. With members from around the world, it also provides the tools, understanding, and methodology necessary to plan for a successful and fun trip no matter where you are traveling to."We as diabetics all have the same worries and this can be a place to find help and support," Kiefer says.

The group helps inspire people to get out of the comfort zone by providing advice on how to travel with diabetes, resources for how to find access to help in other countries and a sense of community that someone else out there knows exactly what they are going through.

"We also created a diabetic travel checklist to help people remember all of the things that need to have with them to travel," she says-noting that among those items on the list is a doctor's letter confirming a diabetes diagnosis and the need for a continuous glucose monitor (CGM)-a wearable device that provides real-time glucose readings, since that can sometimes be an issue at security checkpoints.

"They can stop you when they don't know what the pump or CGM is, and the letter stipulates that you have diabetes and that you need to have and keep everything with you," she says.
"Also that you have to keep it cold."

As she has grown the Diabetic Travelers Network into a full-time job, Julie has found the feeling of belonging she was looking for as a child.

"Community is so important. Over the years I struggled with loneliness and social media and having an online community has really helped me personally. And other people are able to benefit from other people's knowledge and support."

There is an incredible amount of beauty in the world around us and the Diabetic Travelers Network is a great resource for anyone trying to find their way out of their comfort zone. "Diabetes is always there," Kiefer says. "You just have to let it be what it is and take the time to do what you need to do to manage it." 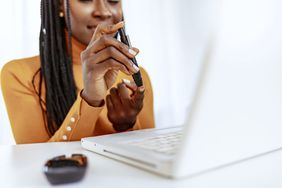