New mom Amy Odell was stunned to learn she had thyroid cancer: "I was so consumed with my baby and his well-being that I neglected to consider my own health."

Four weeks after giving birth, I was pushing my son in his stroller through a mall Sears, desperate for air conditioning. Not to buy one, just to feel it. My husband, baby, and I had joined his family on Cape Cod for a week at the beach in late August, where the house had no AC. A hot Cape day usually tops out at 80 degrees before going back to sweatshirt weather after dark, but this week a rare heat wave enveloped the island like a suffocating sweater. I was so hot in the humid 93-degree heat that I had started nursing in front of the full blast air conditioner in my car.

After one such session, I couldn't bear to return to the Bikram-like environs of the house. So I decided to strap the baby into his car seat and drive to the mall. I had spent so much time standing in front of the open refrigerator that my in-laws probably thought I had a death wish for the cold cuts.

Soon after I got to the mall, my baby started fussing. He didn't want to be in Sears, either. I started back to the car, and I felt emotional when I noticed dark, fluffy storm clouds clustering on the horizon. I drove home in a light rain, both ecstatic about the incoming cooler weather and because I would no longer have to exhaust myself to keep cool.

When we got back to the house, my father-in-law asked me where we went. To the mall, I said, I was just so hot. "I don't think you're regulating properly yet," he replied and walked off.

I hadn't thought my heat intolerance was anything to worry about. It was August. Holding a baby all day makes you hot. I was surely still hormonal, even though my body no longer had a tenant. Maybe complete postpartum bodily reclamation just took longer than I had expected it to. But as I would learn months later, I hadn't just been hot and stressed out from new motherhood, I had been suffering from a medical condition. I was so consumed with my baby and his well-being that I neglected to consider my own health.

When I finally made it to my postpartum checkup about two months after giving birth (I'd already canceled it twice), I didn't think feeling uncomfortably hot qualified as news worth reporting to my obstetrician. The appointment, I thought, was something you do that accomplishes nothing. I had read extensively about how childbirth-related health problems often go ignored by the American medical system, which made me less inclined to take any potential postpartum health problems of my own seriously. Healthcare providers wouldn't care about them, so what could I do? I was grilled about symptoms of postpartum depression, none of which I had experienced. I felt thrilled to both no longer be pregnant and for this to be my last pregnancy-related healthcare provider visit for a long time.

During the appointment, my doctor stood behind me, felt my lower neck, and said my thyroid felt enlarged. I had blood work done. She called later that week with the results: my thyroid hormone was high, and it might just need to be checked again, but I needed to follow up with my GP. She asked if I had heart palpitations, and I said none that I'd noticed.

The GP ordered an ultrasound of my thyroid and did more blood work, which also came back with elevated thyroid hormone. I was told to go see an endocrinologist, who diagnosed me with postpartum thyroiditis—a condition I had never heard of but typically presents in postpartum women as hyperthyroidism (an overactive thyroid) before becoming hypothyroidism (an underactive thyroid). Some women's thyroids return to normal function, but others remain in the hypothyroid phase. Symptoms of hyperthyroidism include heart palpitations, heat intolerance, weight loss, and nervousness. The symptoms of hypothyroidism include fatigue, sensitivity to cold, and dry skin.

Searching the internet suggests that 10% of women get postpartum thyroiditis, and Christian Nasr, MD, chief of endocrinology at the University of Arizona College of Medicine, told me that the number is 5-10%. Many women who don't notice the hyperthyroid phase of the condition do notice something isn't right when they develop hypothyroidism. "It can be more dramatic as far as symptoms," said Dr. Nasr. "And the hyperthyroid phase is typically not severe." (Dr. Nasr did not treat me.)

I had thought my body was behaving normally since giving birth. I was hot at the Cape, but there was a heat wave. I was tired, but I had an infant. Later my skin became dry, but by then it was winter. I was irritable because I was figuring out how to be a parent, so of course I was.

My endocrinologist asked me if I wanted to take medication to boost my thyroid hormone, but I said no—if I thought I felt normal, I didn't see the need to correct something that wasn't bothering me. She told me my ultrasound revealed I had nodules on my thyroid, but a lot of people have nodules and they're usually harmless, so there wasn't anything to worry about.

I didn't give them a second thought.

As the holidays neared, I started feeling especially sluggish. I've always been an exerciser—and I kept it up both before, during, and after pregnancy—but I was no longer able to summon the energy to complete my usual slow jogs. I had been so averse to medical intervention since birth and so desperate to be free of worrisome health problems that I didn't want to even consider an easy, non-invasive treatment for my condition.

When I realized I was causing myself to suffer unnecessarily, I called my endocrinologist and saw her again after Christmas.

"Is there any reason not to take medication?" I asked her.

I started taking a daily dose of Synthroid every morning, and my energy levels returned to normal. I continued with the recommended monitoring, including blood work every so often and a follow-up thyroid ultrasound in the spring.

By spring, I felt great. My son slept 11- to 12-hour stretches at night. I had the energy to do a full day of work and then take him jogging in the evenings before dinner. I assumed the day would come when I no longer presented with hypothyroidism and thyroiditis, and I would be able to stop taking Synthroid every morning.

But my thyroid problems continued. After my second ultrasound later in the spring, my endocrinologist called. "It's probably not anything, and I don't want to scare you," she said, "but one of your nodules grew, so I just want you to get a biopsy so we can be extra sure it's nothing." The biopsy involves lying on your back with your neck stretched out so a doctor can poke it with a needle in the exact place an ultrasound reveals your tiny nodule to be.

A few days later, my endocrinologist called. "I got your results. Do you have a few minutes?" she asked. Something was wrong. A negative result never takes a few minutes. She told me the nodule was papillary thyroid cancer, and I'd need to find a surgeon to remove all or half of my thyroid. She said it was a very slow-growing cancer, and the surgery would be nothing more than "a nuisance."

I learned mine was indeed slow-growing, unlikely to have spread anywhere else in my body, and that it would not kill me. I found out that in older patients, this cancer is often not even removed, but since I was young it shouldn't be left to grow freely in my neck for decades. A surgeon recommended removing the half of my thyroid that contained the cancer, which might one day allow me to regain enough function to stop taking thyroid hormone every day. I had the operation a couple of months ago, and was lucky that it was completely contained and I would require no further treatments. My monitoring appointments are ongoing.

Thyroid cancer and postpartum thyroiditis are separate conditions. But a diagnosis of the latter can uncover cancer. "It's more so detection bias rather than a true relationship, meaning you're paying more attention to the neck, you examine, you do ultrasound, and therefore you find more nodules and more cancer," said Dr. Nasr.

Thyroid problems are important to treat, especially in women of child-bearing age. "We know that there is some morbidity associated with untreated thyroid dysfunction," said Dr. Nasr. Various caretakers I saw in my ongoing thyroid saga remarked on how good obstetricians are at detecting thyroid problems.

Dr. Nasr said that if one notices an enlarged thyroid, knows that a woman had a history of thyroid dysfunction, or presents with symptoms of postpartum depression, her thyroid should be checked. "I'm in favor of paying more attention to women, in general, especially in the years of childbearing, period," he stated. Abnormal thyroid levels can cause fertility problems in women trying to conceive, and thyroid issues can increase the risk of miscarriage, too, he added.

I'm happy to have the surgery behind me. I'm grateful for my remaining half a thyroid, even though my thyroid was a bit of a loser to begin with. And I'm glad that, even though I was prepared for the medical system to fail me after birth, I had doctors who took my health much more seriously than I did. 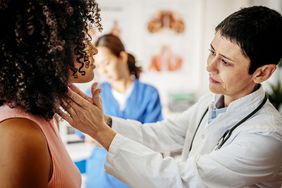