Here's what it's actually like to live with Graves' disease.

In the spring of 2013, I was a college sophomore at a university in New York City with a full, busy life: I was doing well in school, working two internships, hunting for my first apartment with my best friends, and six months into a new relationship with a great guy.

Then, out of nowhere, I started having panic attacks on the subway. Thinking it was claustrophobia, I brushed it off and resolved to never ride during rush hour.

Around the same time, I began waking up with a headache every day. No big deal, I thought, I'll pop a Tylenol to take the edge off. My busy life awaited me, and I couldn't afford to waste time. But weeks later, the headache still hadn't gone away, and I needed to take two Tylenol to handle my pain, then three.

Soon after that, exhaustion set in. I would sleep through the three alarms I set every night, and end up rushing to my morning classes and internships, which made my headache worse and left me even more tired.

One rainy April morning, my boyfriend found me asleep on my dorm room couch, still wrapped in a towel after my shower, because I'd been too tired to walk the extra 10 feet to my bed. It had been a particularly long week, and I figured I was just beat. I promised myself I'd get more rest.

But logging more sleep didn't help, and other bizarre things started happening. During two separate workouts, I nearly fainted. I felt hot all the time. So hot that one day I found myself sweating through a thin tank top even though it was 40 degrees out and windy. I was always hungry. I ate full meals and then got the shakes from low blood sugar just two hours later. I lost 15 pounds. My heart rate sped up every time I walked down the street, and I got winded after climbing one flight of stairs.

When my headaches no longer responded to the max daily dose of Tylenol, I finally went to my school's health center. The nurse put a gadget on my finger to take my pulse.

"Did you run here?" she asked.

"Something's wrong with this thing," she said. "Your heart rate is as high as if you just went on a run."

She gave me pain meds for the headaches. They didn't work. I finally called my parents, convinced I had a brain tumor. They told me to calm down, but they had no idea what could be causing my symptoms.

I went back to the health center and was referred to a neurologist. She ordered blood tests and an MRI. The MRI came back negative; the blood tests revealed my thyroid levels were especially high. So the neurologist sent me to an endocrinologist who, finally, had an answer: Graves' Disease.

When I heard the diagnosis, I started crying. I was so relieved to know what was wrong.

Graves' Disease is an autoimmune disorder, a disease in which the immune system mistakenly attacks your own body. Graves' results in hyperthyroidism, or the overproduction of thyroid hormones, which can cause everything from a racing heart to bulging eyes to anxiety (all three of which I had). Graves' is treatable, but incurable. I will have Graves' for the rest of my life.

My endocrinologist put me on medication to regulate the production of thyroid hormones, and almost immediately, my levels returned to normal. But I still felt anxious and continued to wake up with headaches. So I started seeing an acupuncturist and decided to work with a naturopath to figure out what changes I could make to feel better on a daily basis.

Per the acupuncturist's advice, I now eat as many vegetables as possible, avoid excess sugar and alcohol, steer clear of gluten, and sleep way more than the average 20-something startup employee. When I stray from these guidelines (which I admittedly do), my Graves' symptoms start to come back.

Having an autoimmune disorder undeniably shapes my life. Four years after my diagnosis, every day is a balancing act between what I want to do (dance all night with my friends) and what I need to be able to do (work hard at a job I love). I focus a lot of energy on self-care, and that means I often have to say no to invitations and favor requests, or bail on previous commitments. I feel guilty sometimes, and have to remind myself that even on my good days, my Graves' is real, and I'm not being lazy or selfish by setting boundaries and prioritizing my health.

I'm deeply thankful for my friends and family who understand there are times I just can't go to that event, have dinner at the new Italian place, or stay out for one more round. Even though Graves' is incurable, I'm very lucky that, thanks to my healthcare team and strong support system, I am able to live the life I want 95% of the time.

Editor's note: The writer's name has been changed to protect her privacy. 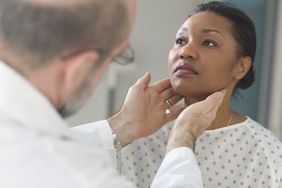 Thyroid Disease Symptoms You Should Be Aware Of