The comedian took to Instagram to prove that she can still rock a sexy bikini despite having the pigment disorder melasma.

Leave it to Sarah Silverman to let the world in on her skin struggles while showing off her bikini bod on a sandy beach.

In a hilarious, body-confident Instagram post that went up yesterday, the comedian proved that even though she’s “melasma-ridden” and “has to wear two hats, zinc and a bandana” over her face, she’s "still got it."

We totally agree she looks awesome. But what the heck is melasma, and what's with the face wrapping?

Covering up like this is part of living with this skin condition, which is characterized by brownish patches on areas of the body that tend to get a lot of sun exposure.

“The face is most commonly affected by melasma, with symmetric patches appearing on the cheeks, forehead, nose, upper lip, and chin,” explains Shilpi Khetarpal, MD, a medical and cosmetic dermatologist at the Cleveland Clinic.

“Ninety percent of melasma cases occur in women,” says Dr. Khetarpal.The disorder is often called "the mask of pregnancy," as up to 25% of women experience melasma when they're expecting.

7 Things Every Woman Should Know About Her Skin

The exact reason melanocytes go haywire isn't known, but it may be triggered by a combination of sun exposure and hormone changes, says Dr. Khetarpal, which certainly happen during pregnancy. Birth control pills can also cause melasma, she adds.

People with darker skin tones are more commonly affected with the condition, since their melanocytes tend to be more active than those in people with lighter skin.

When it comes to treating melasma, Silverman knows what she's doing. “The most important thing is strict sun protection and wearing daily sunscreen, specifically one that contains the ingredient iron oxide,” says Dr. Khetarpal.

First-line therapy for melasma also includes a prescription cream that contains tretinoin (a derivative of vitamin A), a skin-bleaching agent called hydroquinone, and a topical steroid that reduces inflammation. Chemical peels and laser therapy can also help.

But even with all of these options, the condition may never really go away. “Despite the numerous therapies available, high recurrence rates and inconsistent results remain the challenge,” says Dr. Khetarpal, adding that even though patches can get lighter over time, it’s unusual for them to disappear entirely on their own. 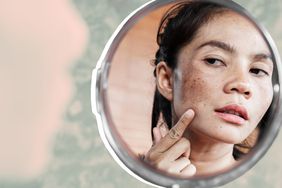 What Is Melasma? Dermatologists Explain the Dark Patches on Your Face—And How to Treat Them

Perinatal Depression Can Recur—But Screening and Treatment Can Help
The Best Sunscreen for Dark Skin, According to Experts and Customer Reviews

The Best Ways to Cope With Eczema on Your Face, According to Dermatologists

Skin Tags Vs. Moles-How to Tell the Difference 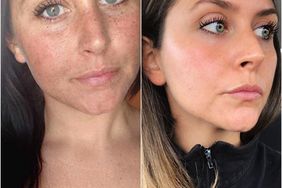 Wendy Williams Takes Time Away From Her Show Due to 'Serious' Health Issues—What to Know About Graves' Disease
The 11 Best Zinc Oxide Sunscreens for Your Face, Recommended by Dermatologists