This DIY method for keloid removal has a high potential for infection, and there's a big chance the tissue could grow back.

As if we needed another reason to remind you to be wary of DIY unproven health advice, there is a disturbing and potentially dangerous method of DIY plastic surgery that is circulating YouTube. These YouTube tutorials offer a method on how to remove keloids—large scar-tissue growths—by cutting off their blood supply with a rubber band.

The videos are graphic: They depict people wrapping rubber bands tightly around keloids on their earlobes and show how the scar tissue turns black, shrivels up, and falls off over the course of a few days. Several of the videos, like the one below, have racked up more than 150,000 views. Watch at your own risk!

Besides being visually alarming, the at-home removal method has healthcare experts concerned. To learn more about keloids—and the right (and wrong) ways to remove them—Health spoke with Jared Liebman, MD, a plastic surgeon with Einstein Healthcare Network in Philadelphia. Here's what he wanted anyone viewing those videos to know.

A keloid is a type of scar tissue that grows beyond the border of its original wound, explained Dr. Liebman. They can form anywhere on the body where an injury to the skin has occurred, but one very common spot is on the earlobe, after a piercing.

"Some things that can lead to keloids can include dirty or infected surgical sites, or similar procedures or interventions," said Dr. Liebman. "Tattoos and piercings can be a common cause because they may be a little less than sterile," Dr. Liebman said.

According to a research article published, earrings (or other piercings) made with inexpensive metal alloys can also trigger allergic reactions that can cause keloids.

Some people—and some ethnic groups, including African Americans, Asians, and Pacific Islanders—are genetically predisposed to developing keloids. In some cases, they can form after even the slightest trauma to the skin, as explained in a 2022 review article.

"For someone with a very high genetic susceptibility, it could be anything that sets up a scar pattern—like an insect bite, or scraping your arm against a brick wall," explained Dr. Liebman. "I've had patients who come in with keloids all over their body and they don't know what the injuries were that caused them," Dr. Liebman said.

What Are the Risks of Rubber-band Removal?

The YouTube trick in question works like this: A rubber band is wrapped tightly around the unwanted growth, essentially forming a tourniquet and cutting off blood and oxygen to the tissue. Within a few days, according to the videos, the keloid becomes black and eventually falls off.

The idea behind this is based on real medical procedures, said Dr. Liebman; in fact, it's similar to a procedure called a vascular clip still used today when babies are born with extra digits. That's definitely not an endorsement, though.

"The technique itself is not necessarily bad, but it's dangerous to undertake any type of surgical technique on your own," Dr. Liebman said. "If you don't have proper background knowledge, the potential for complications is much higher," explained Dr. Liebman.

Removing an earlobe keloid in this way can leave exposed cartilage, according to Dr. Liebman, which could lead to significant ear deformities. "You could have an issue where the cartilage gets infected and doesn't heal well," said Dr. Liebman, "and that would typically require aggressive surgical treatment to remove that part of the ear."

Keloids also have a very high recurrence rate, especially when they're not removed in a sterile environment the first time. "The likelihood that that keloid would grow back is pretty high in these circumstances," cautioned Dr. Liebman.

What Are the Treatment Options?

To be honest, said Dr. Liebman, there's not a lot of great research on keloid removal and what works best; that's because keloids seem to be unique to humans, so there's no good way to study them (or their remedies) on animals.

"People should definitely start by addressing their primary care doctor or some other healthcare professional," said Dr. Liebman. "Scar-revision treatments are generally considered cosmetic and aren't covered by insurance, but if it's a true keloid—when it's large and irregular and potentially deforming—companies will often make an exception."

But there are a few procedures that can be performed by a dermatologist or plastic surgeon that seem to work well, Dr. Liebman added. A healthcare provider may recommend a compression device—a clip-on device that applies pressure to the affected tissue—that can help the keloid get smaller or fall off on its own. Additionally, these method can also be used to shrink or remove keloids:

Having these procedures done by a medical professional can ensure that they're sterile and can reduce the risk of infection or recurrence, said Dr. Liebman. A healthcare provider can also advise, based on your personal and family history of keloids, which method of removal may work best.

You can also reduce your risk of developing keloids by avoiding piercings and tattoos, or by researching facilities that perform these services ahead of time. "Make sure the shop is using good, sterile techniques and it's a clean environment," said Dr. Liebman. "If you're getting a piercing, I would also strongly recommend using a precious metal." Specifically, Dr Liebman suggested solid gold (not gold plated), sterling silver, or surgical-grade stainless steel.

Should You Try the Rubber-band Method?

Dr. Liebman hasn't had any patients ask him about this particular DIY remedy, but he's not surprised that people have attempted this type of treatment at home. "I had one patient who tried to treat something on her lip with an apple-cider vinegar mixture and she ended up with a horrendous burn," Dr. Liebman said. "Just because you see something on the Internet doesn't mean you should try it yourself," warned Dr. Liebman.

Piercing Rejection: What It Is and How To Treat It

If you're thinking about removing your keloid with a rubber-band, you may want to reconsider. If you try this at home, there is an increased risk for infection and ear deformities. And keloids are also likely to reoccur. It's best to seek treatment from a healthcare provider to make sure you treat your keloid in a safe way. 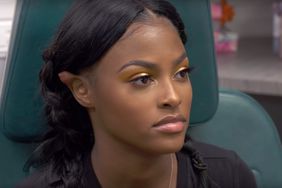 How to Get Water Out of Your Ear
This Man Tried To Enlarge His Penis by Injecting It With Petroleum Jelly: It Went Dangerously Wrong

The Healthiest Style of Pubic Hair