Whatever you do, don't try to remove a mole on your own.

Chances are good that you have at least one mole somewhere on your body—most people do. The American Academy of Dermatology (AAD) says that about one in 100 people are born with at least one mole, called a congenital mole, while the average person develops about 10 to 20 acquired moles in their lifetime, depending on the fairness of their skin.

For the most part, these moles are harmless, and can be removed if the person is bothered by them in any way (that can mean both physically or mentally). But sometimes, moles have to be removed if they've changed at all over time and a dermatologist is concerned about skin cancer.

Regardless of why a mole is removed, there's more to it than just snipping it off with a pair of scissors (which, by the way, is something you should never do on your own). We've tapped two dermatologists who specialize in mole removal to walk you through why moles are often removed, how a physician will do it, and what to expect after. Here's what to know.

First things first: It's important to understand what a mole is. According to the US National Library of Medicine's MedlinePlus resource, a mole—technically known as a nevus—is a growth on the skin that happens when cells called melanocytes (pigmented cells) grow in a cluster. Melanocytes produce melanin, a pigment that gives color to hair, eyes, and skin, and protects the skin from the damaging effects of ultraviolet light.

These cells are usually spaced out on your skin, but if they acquire specific mutations in their DNA, "either randomly, or during the various stages of human development, or due to damage from UV light," they can grow in groups or clusters, Ata Moshiri, MD, a board-certified dermatologist specializing in skin cancer treatment at the University of Washington Medicine, told Health.

Dr. Moshiri said these clusters can be seen on the skin as a flat spot if they remain in the top layer of the skin (the epidermis) or as a raised bump if the cluster is also in the second layer (the dermis).

Genetics play a major role in whether someone is more prone to have moles, Nada Elbuluk, MD, a dermatologist with Keck Medicine of USC and director of the USC Skin of Color and Pigmentary Disorders Program, told Health. "But what causes moles to change over time and become abnormal or even cancerous, besides genetics, can also be related to exposure [to sunlight or ultraviolet light]," said Dr. Elbuluk.

What Are the Different Types of Moles?

There are also different types of moles. Common or benign moles are typically harmless, meaning they rarely turn into melanoma—aka a cancerous mole—per the National Cancer Institute (NCI). These common moles, which can appear anywhere on the body, have a uniform color throughout and can be pink, tan, or brown. "Most [common] moles are symmetrical, and they have sharp borders to them, are relatively small in size, usually less than six millimeters, and they're not changing very much over time," said Dr. Moshiri.

Finally, a melanoma is a cancerous mole—it's the most potentially dangerous type of skin cancer since it can turn metastatic, or move to other parts of the body, per the NCI. Melanoma is technically a type of skin cancer that begins in melanocytes, and it can form in a common mole, a dysplastic nevus, or a patch of skin that looked totally clear prior to the growth. According to the NCI, male individuals usually develop melanoma on the head, neck, or back; female individuals often develop it on the back or lower legs. On those with dark skin, melanoma is less likely but can develop under fingernails or toenails, on the palms of the hands, or on the soles of the feet.

Why Do Moles Get Removed?

When dermatologists detect an abnormality or suspect a risk of cancer in the mole, Dr. Moshiri said they will suggest a mole removal and biopsy to make sure it isn't melanoma.

A dermatologist would suspect melanoma and suggest a biopsy if the growth appears to meet the following criteria, known as the "ABCDE rule," per the NCI:

People also get moles removed for aesthetic reasons, like if it makes you feel negatively about your appearance, or if it continually gets irritated from clothing or movement.

How Are Moles Typically Removed?

There are three methods of mole removal, all of which are procedures often completed on the same day as your visit to the dermatologist or healthcare provider. In some cases, you may be required to return another time to remove any leftover cells, particularly with a larger mole or if the biopsy result reveals that the surrounding tissue is abnormal, said Dr. Elbuluk.

Before each procedure, the skin is first cleaned with an antiseptic and injected with an anesthetic so you feel no or minimal pain. The dermatologist will then perform one of the following procedures:

"A punch biopsy is best used for deeper lesions that have a significant component in that second layer of the skin, which is the dermis, or even deeper into fat," said Dr. Moshiri.

The dermatologist will use a punch tool, which resembles a cookie cutter with a circular blade, to remove a cylinder of tissue between approximately 1 to 8 millimeters in diameter, explained Dr. Elbuluk. The deep, round hole is then closed with stitches, and the mole tissue is sent to a pathology lab to check for any cancer. After a few weeks, the stitches will either dissolve or be removed by the dermatologist.

During a shave biopsy, a razor blade is used to remove the mole and a small amount of the surrounding tissue said Dr. Moshiri. "This technique is best for shallower lesions that are likely only in the top layer of the skin, the epidermis, and maybe a little bit in the superficial dermis."

After stopping the bleeding, the dermatologist bandages the small wound, which is left to heal over a few weeks and forms a flat or slightly indented scar.

For larger or deeper moles, the dermatologist will perform an excision using a scalpel to remove a small ellipse of mole and skin tissue, said Dr. Moshiri. The wound is closed with stitches and forms a long line scar. After a few weeks, the stitches will either dissolve or be removed by the dermatologist.

Don't try to remove any moles on your own at home or by laser treatment, as you are more likely to irritate the mole, change its natural architecture, or leave some of it behind without realizing, said Dr. Moshiri and Dr. Elbuluk. Removing your moles with these other methods can also mean no pathology testing is done, which means abnormalities can fly under the radar for a long time.

Are There Any Risks Associated With Mole Removal?

Both dermatologists Health consulted highlight that all three mole removal procedures will leave you with a scar in place of the mole. There is also a small risk of infection and post-procedural bleeding, said Dr. Moshiri. If your skin is very sensitive, bruising can develop, said Dr. Elbuluk, but this is generally uncommon.

Sometimes, if the mole isn't removed entirely, it can regrow within the scar to cause a bump or discoloration, noted Dr. Moshiri. This can either be left alone or removed if the pathology results indicate an abnormality.

Finally, there's also the risk of the procedure being regarded as cosmetic in nature, which means your health insurance may not cover the fees, added Dr. Elbuluk. So, speak to your insurance company or the clinic prior to the mole removal so you are aware of the potential fees.

Do You Have a Freckle on Your Wrist? Here's Why So Many Women Have Them

You can lower the risk of post-procedural infection by doing proper wound aftercare, which your dermatologist will instruct you on before you leave the clinic. "If you are prone to infections or excessive bleeding or have a propensity for poor wound healing or keloid formation, let your physician know prior to the procedures so that additional aftercare planning can be done," advised Dr. Moshiri.

The dermatologist would usually apply petroleum jelly over the wound before discharging you from the clinic and recommend you keep the bandaged wound area dry for the first 24 hours.

After 24 hours, you can remove the wound dressing. Dr. Elbuluk recommended washing the area gently with soap and water daily and to keep the wound covered with a thin layer of petroleum jelly. If you have a shave biopsy, you would be advised to keep the wound bandaged to prevent infection until it is fully scabbed over. For a punch biopsy and surgical excision, you may or may not need a bandage because the wound is stitched up, said Dr. Elbuluk. Stitches usually dissolve or are removed after 10 to 14 days.

8 Melanoma Treatments and Therapies To Know

Dr. Moshiri said the surrounding areas of the wound are likely to see redness, itch, pain, or discharge on the first few days of wound healing. These do not necessarily indicate an infection, but if the symptoms worsen, contact your clinic.

Once the wound has healed and closed, Dr. Moshiri advised covering the area with sunscreen to protect it from ultraviolet light exposure, as this can cause redness or pigmentary changes that worsen the appearance of the scar.

There are a few different ways to remove moles—shave biopsy, punch biopsy, or surgical excision—none of which include doing it at home yourself. Moles may be removed for various reasons, from cosmetic to cancerous. If you notice a new growth on your skin and are concerned, schedule an appointment with your healthcare provider or a dermatologist to have it properly assessed and removed, if necessary.

All Five Stages of Melanoma—Explained by a Dermatologist 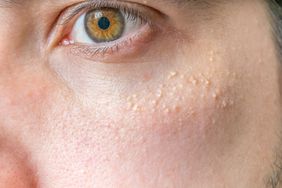 How To Get Rid of Milia On Your Face