Here are five scary things you can catch from floodwater after a natural disaster.

Hurricanes can cause fierce winds, torrential rain, and flooding, sending hundreds of thousands of people fleeing their homes. And even after the immediate dangers have passed, storms can create dangerous conditions long after the wind and rain have stopped.

“Floodwater can have very high levels of bacteria, viruses, sewage, and parasites that can infect you if it gets in your mouth, your eyes, or into a cut in your skin,” said Amesh Adalja, MD, senior scholar at the Johns Hopkins University Center for Health Security. “It’s much different than other types of water you’d encounter in everyday life.”

Here are a few ways flooding can make disaster victims and rescue workers sick and how you can protect yourself if you’re in harm’s way.

What Mold Looks and Smells Like in Your House

Dr. Adalja said one of the most significant risks of swallowing floodwater is ingesting a bacterium, virus, or parasite that causes gastrointestinal (GI) illnesses.

"Most of these infections will probably be pretty benign and may only cause vomiting or diarrhea," explained Dr. Adalja.

Other symptoms can include stomach pain, nausea, and gas. Sometimes, those illnesses can lead to dehydration which can be severe if left untreated.

Conditions that are caused by bacteria-contaminated water, such as from flooding and natural disasters, include:

Dr. Adalja added that leptospirosis, a potentially fatal illness spread through rat urine, is another significant risk in flooded communities.

It's essential to avoid bathing yourself or your children in floodwater or contaminated rivers, streams, or lakes. Also, be sure to wash your hands after any contact with floodwater.

Swallowing bacteria isn't the only risky thing about being exposed to floodwater.

"People in these situations may have abrasions or cuts on their body, and those can get secondarily infected with bacteria from the water," said Dr. Adalja.

Bacteria in the floodwater may come from sewage, chemicals, or pollutants. Sometimes, tsunamis and hurricanes can cause disruptions in the soil that can unearth infectious organisms, as well.

If you notice any wounds, keep an eye on them for any signs of infection, including wounds that:

"If you have cuts or scrapes, try your best to cover them up and administer basic first aid," noted Dr. Adalja. "Use an antibiotic ointment if you have it, and keep an eye on it to make sure it doesn't become red or swollen."

If it doesn't appear to be healing as it should—or if you develop a fever or other signs of infection—see a healthcare provider as soon as possible.

"Another problem with flooding is that it can attract mosquitoes," said Dr. Adalja. "They find breeding places in all the debris that serves as receptacles for standing water after a flood."

According to Dr. Adalja, most of the United States is at risk for West Nile virus, one of the most prevalent mosquito-borne illnesses. Most of the time, people who are infected don't feel sick. But about 20% of infected people will develop a fever and other symptoms.

In general, illnesses from a mosquito can range from mild to severe. Several states can harbor mosquitoes that carry other viruses, such as:

If you go outside after a flood, it is important to use insect repellent and wear long sleeves to avoid getting bitten by a mosquito.

Hepatitis is often thought of as an illness that’s spread through sex or IV drug use. But certain types of hepatitis can also be transmitted through contaminated food or water.

Hepatitis is inflammation of the liver caused by a virus. Hepatitis A and E can be dangerous in areas that have experienced flooding.

The bacteria Legionella is found naturally in water. People who swallow or breathe in contaminated water droplets can contract Legionnaires' disease, a respiratory infection that causes the following symptoms:

You can usually treat Legionnaires' disease with antibiotics, like most bacterial infections. Although, the illness can sometimes be fatal, especially if it's not caught early. About 10% of people who get Legionnaires disease die from complications.

How To Avoid Exposure

Amid a natural disaster, avoiding exposure to flooding and finding appropriate medical treatment immediately afterward can be challenging. But Dr. Adalja said people could reduce their risk of becoming sick by using common sense and practicing good hygiene whenever possible.

"Try to avoid exposure of your mouth, your nose, and your eyes to the water if you can," advised Dr. Adalja. "And, of course, avoiding floodwater altogether is the safest bet, which is why evacuation is usually the best thing to do."

Here are a few additional tips to stay safe after a flood:

Several health problems can be associated with floods. GI illnesses, skin infections, mosquito-borne illnesses, hepatitis, and Legionnaires' disease are some health issues you may be at risk for after a flood.

It can be challenging to avoid illness from flooding, so one of the best prevention methods is to evacuate the area before the flood if you can do so.

If you get sick after exposure to floodwater, mention your symptoms to a healthcare provider as soon as possible. 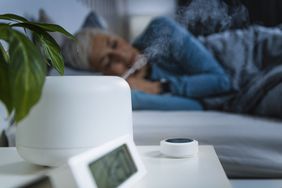 Why You Shouldn't Use Tap Water in Humidifiers, Neti Pots, or Other Home Medical Devices