Itchy bumps or oozing blisters? Here's what might be going on.

A rash in your armpit, or "axilla," can be mild or severe, short-lived or chronic, and treatments depend on the underlying cause. Over-the-counter creams can work best for some rashes, while others require a prescription.

Any time you have lingering symptoms—like an itchy, irritated armpit—it's not a bad idea to see a healthcare provider who specializes in skin conditions. Keep reading to get the lowdown on armpit rashes and what to do about them.

This rash is caused by exposure to something that irritates the skin or causes an allergic reaction, according to MedlinePlus.

Contact dermatitis is probably the most common cause of armpit rashes, Lisa Chipps, MD, a Los Angeles-based board-certified dermatologist, told Health. Patients usually come in with a story, "like they're worried about the deodorant that they just applied the last few months or weeks."

There are two main types of contact dermatitis. Per the American Academy of Dermatology (AAD), each can cause an itchy, burning, or painful rash.

It's possible to have both types of contact dermatitis, Yale Medicine points out.

So what's the solution? The best advice is to avoid the allergen or irritant. "Usually, when you discontinue the offending product, usually you can clear up the rash," said Dr. Chipps. "And sometimes we'll prescribe some anti-inflammatory creams to use to get the patient to feel better faster," Dr. Chipps added. In more severe cases, Yale Medicine says healthcare providers may recommend oral steroids, such as prednisone, to relieve an itchy rash.

What To Do if You Find an Armpit Lump

Also known as acne inversa, HS is a chronic inflammatory skin condition. It begins as a blockage of hair follicles in areas of the body where certain sweat glands (called apocrine sweat glands) reside, says MedlinePlus.

"One of the major areas that it occurs is in the axilla, but it could certainly occur in the groin," Amy McMichael, MD, professor and chair of the Department of Dermatology at Wake Forest Baptist Medical Center in Winston-Salem, North Carolina, told Health.

While anyone can develop this condition, it's more common in women, particularly African American cisgender females, per the National Institute of Arthritis and Musculoskeletal and Skin Diseases (NIAMS).

In its mildest form, HS produces small, painful, pus-filled bumps. They may look reddish, purplish, or darker brown, depending on a person's skin color, said Dr. McMichael. As HS progresses, larger nodules can develop. The bumps can rupture and leak foul-smelling fluid and pus, says MedlinePlus. Tracks or tunnels connecting the wounds may form beneath the surface of the skin, leading to scarring and even keloids, noted Dr. McMichael.

Treatment, Dr. McMichael said, depends on the severity of the disease. Topically applied cleansers and antibiotics might be the first choice for mild disease. For moderate disease, options include various oral medications and combination therapies. Adalimumab (Humira), an injectable biologic, is approved for moderate-to-severe disease, says the AAD. Various surgical procedures may be performed to allow the pus-filled lesions to drain and heal.

A zit-like rash in your armpits? It could be folliculitis, a common condition that occurs when hair follicles become infected, per the AAD.

"We see that most often when people are shaving too close to the skin and then getting ingrown hairs or little nicks in the skin that allow the normal skin bacteria to penetrate and get in under the skin," said Dr. Chipps.

Treatment may depend on the type and severity of the rash, Fred H. Brennan, Jr., DO, assistant director of the University of South Florida-BayCare family medicine and sports medicine programs in Clearwater, Florida, told Health.

For a mild, pimply rash, it may be best to stop shaving for a couple of days and apply an over-the-counter topical steroid, like hydrocortisone cream, a couple of times a day, Dr. Brennan said. For a more severe rash, where the bumps are topped by pustules, or little whiteheads, you may need an antibiotic. "That means you have a pretty good infection brewing there," said Dr. Brennan.

Laser hair removal can be helpful in reducing the thickness of the hair and decreasing hair growth in the area, noted Dr. McMichael.

Can Stress Cause Hives? What to Know About Stress Rashes and How to Treat One

AN is not a rash, per se. It's a velvety thickening of the skin in the body's folds and creases, and that includes the armpits, according to UpToDate. These patches appear darker in color than the surrounding skin.

Acanthosis nigricans has been linked to insulin resistance (due to diabetes or pre-diabetes, for example), hormonal irregularities (like thyroid disease), and the use of certain drugs (such as birth control pills or steroids), notes the AAD. People who are overweight, have a family history of AN, or have darker skin are at greater risk of developing this skin condition. Although AN usually develops slowly, its sudden appearance may be a sign of cancer, the National Organization for Rare Disorders (NORD) cautions.

If there's an underlying medical cause, addressing the issue may help—managing insulin resistance, for example. To reduce the appearance of AN, per the AAD, healthcare providers may suggest oral or topical retinoids to help clear the skin, laser treatments to reduce the skin thickness, or topical medication to lighten the skin.

Dr. McMichael has seen patients who've tried to lighten the patches under their pits with bleaching cream, but this is not recommended for the sensitive skin of the axilla. "When you try to treat it with a bleaching agent, it just doesn't work, and it can be very irritating."

Chafing, or skin rubbing against skin, especially in warm or moist areas of the body, can cause this itchy or burning rash known as intertrigo, says the American Academy of Family Physicians (AAFP).

It can appear red-to-violet in color or even just hyperpigmented, according to Dr. McMichael. "We typically see it most commonly under the breast, but you could get it in the underarms too," Dr. McMichael said.

Intertrigo affects the outer layers of skin, says MedlinePlus. These so-called intertriginous areas can ooze, crack, or bleed, the AAFP explains, and as the skin breaks down, it becomes vulnerable to infection.

Keeping skin folds cool and dry can help with healing and prevent recurrences, says the AAFP. As for treatment, MedlinePlus says options include antibiotic or antifungal creams, topical steroid cream, and drying agents (such as antiperspirant or absorbent powder).

This is a type of rash that affects the body's skin folds, says the National Psoriasis Foundation (NPF). One study published in 2016 in the journal Clinical and Experimental Dermatology found that it affects 24% to 30% of people with psoriasis. Unlike the white, scaly patches that psoriasis usually produces, inverse psoriasis (aka intertriginous psoriasis) can be smooth and shiny, the foundation notes. Additionally, the rash can be sore, itchy, and irritated from sweating, according to a 2018 study published in Dermatology Therapy.

"A lot of times people think they have intertrigo or yeast," said Dr. McMichael. But the key to treatment is getting a proper diagnosis: "You could put all the anti-yeast medicine you want on that, and if you don't biopsy it and find out that it's psoriasis, then you'll miss the boat," Dr. McMichael said.

Topical steroids are usually the first choice of treatment, per the NPF, although more severe cases may require oral medication or biologic therapy.

Ringworm is an itchy, scaly rash that forms a ring-like pattern on the skin. It belongs to a group of diseases called tinea, which is caused by fungi, per MedlinePlus.

"Just like people get athlete's foot or jock itch, sometimes they can get a fungal infection in the armpit from moisture and heat," explained Dr. Chipps.

Ringworm spreads via contact with an infected person or animal or by touching a surface where the fungi like to live, says the Centers for Disease Control and Prevention (CDC). While anyone can get ringworm, athletes are more vulnerable—particularly those involved in contact sports. Wrestlers might get it under their arms from skin-to-skin contact, for example. You can also get ringworm by sharing towels or other personal items with someone who has the infection, the CDC explains.

Ringworm is typically treated topically with an over-the-counter or prescription antifungal medication, the CDC notes.

Yeast thrives in warm, moist creases of the body, per MedlinePlus, and that includes your armpits. Candidiasis is simply a yeast infection of the skin.

The same fungus that causes most vaginal yeast infections, Candida albicans, is often responsible for skin infections too. These infections are the result of an overgrowth of yeast normally found on your skin, according to Johns Hopkins Medicine. Sometimes they're a complication of intertrigo, says the AAFP.

This type of rash may be pimply and can itch, burn, or ooze, per Johns Hopkins Medicine. The go-to treatment? Antifungal powders.

Yes, you can get a pimply underarm rash from being overheated. But unlike a fungal infection, which can take some time to clear up, a heat rash is fleeting.

"It's more of an inflammatory process that goes away when you cool the skin," said Dr. Chipps. "It doesn't linger around."

Per the National Library of Medicine (NLM), this type of rash (also called miliaria) occurs when sweat glands and ducts become obstructed by bacteria, skin cells, oil, or other debris. Clusters of pimples or small blisters can make your skin feel itchy or irritated—causing prickly, tingling pain, according to the AAFP.

If you keep your skin cool and dry, the rash should clear up on its own, says Johns Hopkins Medicine. Sometimes healthcare providers prescribe a corticosteroid lotion.

Cutaneous lymphoma, or lymphoma of the skin, is an uncommon type of cancer, says the American Cancer Society (ACS). It begins in white blood cells called lymphocytes, which are part of the body's immune system.

Skin lymphomas may appear as pimples, flat patches, thick plaques, or nodules, says the ACS. They may be itchy and range in color from red to purple. If cancer reaches the lymph nodes, you may feel a lump in your armpit area.

Most skin lymphomas have no known cause. According to the ACS, having a weakened immune system can boost your risk of developing skin lymphoma, although it's not clear why.

Various treatments may be recommended depending on the type, location, and stage of cancer. 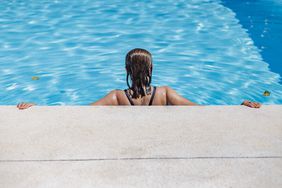