There are other less obvious signs of skin cancer too.

Dermatologists always seem to be recommending a regular skin check at home—but do you know what you're looking for?

While the most obvious sign of skin cancer is an abnormal-looking mole or a spot that's grown or changed since the last time you checked, it's not the only thing to watch out for. (It is the most common sign of melanoma, however: Check moles for asymmetry, uneven borders, color, diameter, and evolution, called the ABCDEs of melanoma.)

Read over this refresher before the next time you give your largest organ the once-over.

Sometimes skin cancer shows up in the form of a clear or skin-colored bump. "A lot of people don't know what it is at first and think it's a pimple or a bug bite and give it a chance to heal," says Susan Y. Chon, MD, associate professor in the department of dermatology at the University of Texas MD Anderson Cancer Center. This could be an early-stage basal cell or squamous cell skin cancer, she says, even if it never hurts, bleeds, or causes other symptoms. "It doesn't have to be dramatic—but it's not supposed to be there."

If you find a hard bump on your eyelid, it's possible it could be a sign of rare skin cancer that starts in oil glands called sebaceous gland carcinoma, according to the American Academy of Dermatology.

And a shiny or firm nodule under the skin–usually on your head, neck, or torso–could be a sign of rare skin cancer called Merkel cell carcinoma, according to the Mayo Clinic.

It's easy to brush off a bit of scaly skin as eczema or dryness. But if you moisturize or even try treating a scaly patch with over-the-counter ointments and it doesn't go away, what you think might be a rash could be a sign of basal cell or squamous cell carcinoma, Dr. Chon says. "It's just a little patch of skin that's kind of scaly and not healing," she says. It might also be growing slowly, she says.

Anything Crusty or Oozing

A "classic" basal cell carcinoma lesion oozes, crusts over, and won't heal, Dr. Chon explains. "It's like a chronic wound, the center doesn't hold together."

Any spots that bleed, ooze, or crust should definitely be brought to a dermatologist's attention, she says.

Merkel cell carcinoma can also appear as a blue, red, or purple nodule, according to the Mayo Clinic, and another rare cancer, Kaposi sarcoma, can show up as discolored skin too.

Kaposi sarcoma starts in blood vessels but it can result in red, purple, or brown tumors or patches on the skin (or on mucous membranes, like the inside of your mouth), according to the American Cancer Society. It usually only occurs in people with already weakened immune systems, like people with AIDS.

Anything That Doesn't Go Away

Sometimes other skin cancer symptoms aren't all that obvious, Dr. Chon says, but one telltale sign is that whatever spot you notice doesn't go away. "People get little bumps all the time from inflammation or bug bites, but they go away in a few weeks," she says. "Most things should flatten out and get gradually better and better."

Skin cancer, she says, doesn't. Instead, "it persists," she says, and may eventually become symptomatic. Those spots are definitely worth talking to your dermatologist about. 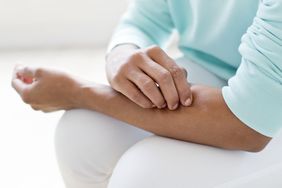 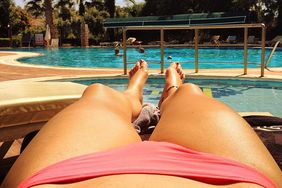