It's National Love Your Red Hair Day! Here Are 5 Surprising Ways Being a Redhead Affects Your Health

Your hair isn't the only thing that makes you unique. Here's how your DNA may influence your pain sensitivity, how fast you age, and more.

Gingers stand out from the crowd for more than the bright hue of their hair. They are also relatively rare: Only between 1% and 2% of the world's population is born a redhead. These folks carry two copies of a variant of the MC1R gene, which determines our hair and skin color. Their redhead DNA also leads to pale skin and cute freckles—but that's not all. Research has revealed a handful of ways having red locks can affect a person's health, from how they feel pain (hint: more intensely) to their likelihood of developing various diseases.

Your melanoma risk is higher

It's no secret that their pale skin makes gingers more susceptible to sunburns and skin cancers. But in 2012, researchers actually discovered a link between redhead DNA and skin cancers with more mutations. Non-redheads aren't off the hook, either: Carrying just one copy of the recessive MC1R variant appeared to be tied to a bump in the number of mutations linked to melanoma, the deadliest type of skin cancer. It's another reminder of just how important it is to protect yourself from the sun's harmful rays no matter your hair color, and especially if you've got fiery locks.

You're better at making vitamin D

Fortunately for redheads, it doesn't take much sun exposure for their bodies to manufacture a healthy amount of vitamin D. Pale-skinned people are most efficient at synthesizing D, which is crucial for bone health, and is thought to protect against depression and fight off colds. (Vitamin D deficiency has also been linked a slew of health conditions, from hair loss to cancer.) Scottish experts have speculated that this ability gives redheads a genetic advantage in gloomy climates, because they can churn out more D in low-light conditions than people with darker skin or hair.

You may be more sensitive to pain

Research suggests that redheads experience pain more intensely than others, and may even require more anesthesia for surgery. The reason isn't entirely clear, but as this video from the American Chemical Society explains, one theory is that ginger DNA may heighten neural activity in the periaqueductal grey—a part of the brain that controls some pain sensation.

You may look older than you are (but only a little)

You can blame your DNA: In a Current Biology study published last year, Dutch researchers found that adults who carried two copies of the MC1R gene variant typically appeared two years older than other white adults of the same age. And it wasn't because gingers had more wrinkles (which you might guess, since they're more prone to sun damage). The gene variants were linked to other signs of aging, such as thinning lips and sagging skin along the jaw line, the researchers said. "This suggests the gene is affecting facial aging through some unknown route," co-author David Gunn, a senior scientist at Unilever, told HealthDay.

Male gingers are less likely to get prostate cancer

Research published in 2013 in the British Journal of Cancer suggests that gingers have roughly half the risk of prostate cancer as men with light brown hair. The investigators followed more than 20,000 men in a long-term health study, and found that less than 1% of redheads got prostate cancer, compared to 40% of men with light brown hair. The study did not reveal why this is true, but the authors speculated that one possible explanation might have something to do with vitamin D.

What Is Lupus?
The Best Sunscreen for Dark Skin, According to Experts and Customer Reviews 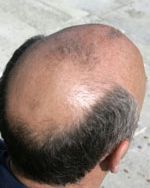