She says the removal and recovery process has been "a roller coaster of emotions."

Rachel Bennett's moles were a part of who she was.

"They were like my birthmark, my trademark, something that made me significantly different looking than other people, and I absolutely loved them," she tells Health.

So in late January, when the 38-year-old social media influencer and mother of six got the moles on her face removed so that they could be checked for skin cancer, she no longer felt like herself. Months later, she's still on that journey to accepting her new mole-free look.

When Bennett looks at pictures of herself from elementary school, her two earliest moles are there. The first mole on her face—the one closest to her mouth—developed when she was younger than 2 years old. The second one—the one that's about cheek level—developed in the following few years. The third mole—the one under her eye—came later in life, right around the time she got married to her husband, Jase.

The moles were never a concern; never something she was told she needed to see a doctor for. But then her friend had a mole removed, and it turned out to be melanoma. Seeing her friend go through that, Bennett realized that getting her own moles checked out was something that she wanted to do. A couple years later, after she and her family started their YouTube channel, The Ohana Adventure, that time came. Bennett wound up going to a dermatologist.

"My face was on the camera a lot, and a lot of people were really negative about moles on people's faces. It wasn't very kind, but I didn't care too much," Bennett says, who always felt confident about her moles. "I felt like it was something that differentiated me from other people. I felt like it was my mark that made me different, but I did want to make sure we got them checked out."

At the time, her dermatologist wasn't too concerned, according to Bennett. The doctor said that her moles looked OK and to just keep an eye on them.

"She noticed, overtime, my larger one that was closer to my mouth, like lower on my cheek, that it looked like it had grown," Bennett says. "So she said we should come in and have her check it out because we want to make sure it's not a concern."

During the appointment in late January 2021—which can be found on the family's YouTube channel—the dermatologist said that the moles didn't look too concerning. Still, the doctor did point out that the type of cancer she suspected it could be—melanoma—changes fast, especially at Bennett's age. And so, the dermatologist recommended the moles be removed and tested.

Bennett was caught off guard. "I thought she was going to take a look at my face and then schedule another date, maybe have them removed after we discussed it. But she was ready to do it then, which was a little like, 'ahh,'" Bennett explains.

Fortunately, after testing the moles, the results showed that they were not cancerous.

Though Bennett was used to getting negative comments that targeted her moles on her YouTube videos, she wondered how the comments would change after having her moles removed. "I'm not ready for attacks because I'm not sure if I like the way I look now," Bennett says she thought to herself. Plus, how would viewers react to what her face looked like as she recovered from the mole removals?

Sunscreen vs. Sunblock: What's the Difference, and Which One Is Better?

"When I got them removed, I knew there was a healing process. But being in our line of work where we post on our social media every single day—we put out videos, we put out posts, our faces are on the camera a lot—I was very self-conscious," says Bennett, who used lotions and creams to help the scabs heal and prevent scarring. "I didn't want to open myself up to more criticism or negative comments, like, 'Oh, my gosh, what's wrong with your face?'"

So Bennett avoided social media and seeing friends for a few weeks. "There's a lot of friends and followers who are very positive, but I think I was in a vulnerable state because I felt like a part of me was being removed, and that was my trademark. And so it kind of made me question… how I want to perceive my own look," she explains. "Like when people dye their hair, when they get a drastic haircut or makeover, it might take some adjusting because even when you close your eyes, you imagine what you look like."

But on February 15, she felt ready to post about her mole removal and recovery journey. In the caption of the viral photo, Bennett wrote, "What seems simple and good for my health was more difficult than I anticipated… I feel weird because I'm insecure about my face, but even weirder that a part of me is gone. I know I'll get used to it, and I'm sure I will love my new face, but the process has been a roller coaster of emotions. Isn't it crazy that something so small can do that?"

Since that first post, Bennett has continued to document her recovery journey on her Instagram. Now, she is at the stage where the skin where her moles were removed is still new, fresh, and pink. "It kind of looks like acne now because I have these three pink dots on my face. So when I do go out, I want to put concealer on it because I do still feel self-conscious," she says.

While she is now active again on social media and more open about sharing her journey, she says she's still on that road to being comfortable in her new skin. "I'm like, why is my skin taking so long to not be pink, but I know it can take many months. I am learning patience through this all, but I do feel like I have many more months to go where I will probably not feel confident in my face or my look until maybe the color changes back to my normal skin tone color."

Although the removal and recovery process has been challenging, she is confident in her decision to be proactive about her health: Bennett says she is "all about prevention."

And the more proactive people are about getting their skin checked, the more chance there is for survival if melanoma is in fact present. According to the Skin Cancer Foundation, there is a 99% five-year survival rate for patients in the US whose melanoma is detected early.

One proactive step people can take is knowing what to look for on their skin. "We still rely on the ABCDEs of melanoma: asymmetry, irregular borders, changes in color, diameter (larger than about one-quarter of an inch), and evolving, meaning it changes over time," Dendy Engelman, MD, a New York City-based dermatologist previously told Health.

In addition to the ABCDEs being possible signs of melanoma, the Skin Cancer Foundation suggests people look out for a spot that looks different from all of the other spots on your skin. Known as "the ugly duckling," this could also be a potential warning sign of melanoma. These spots could belarger, smaller, lighter, or darker compared to surrounding moles.

"I would encourage people to be aware of your body. You know, our body is here so that we can do things with it and help people and accomplish tasks," Bennett says. "Be aware of things that are happening [with your body], so when the time comes that you might need a professional, you are ready." 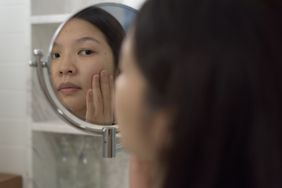