Including information on gender assignment surgery and how to provide support to the intersex community.

If you've noticed the I in LGBTQIA+, you may wonder what it means and where it came from. The I stands for intersex, a biological variance that means a person's sex doesn't fit neatly into the boxes of "male" or "female"—based on their chromosomes, genital presentation, reproductive tissue, or some combination of the three. Learn more about what it means to be intersex and why more intersex individuals are embracing this identity.

What Does Intersex Mean?

"A person is said to be born with intersex biology when she or he is born with a body that doesn't fit the medical standards for male or female," Alice Dreger, PhD, founding board chair of the Intersex Society of North America (ISNA), told Health. "There are a few dozen different ways to be born intersex because sex development is really complicated. It involves genes, hormone receptors, organ development, and more."

Intersex used to be known as hermaphroditism, but the latter term is outdated and no longer used. Instead, intersex conditions are referred to as disorders of sex development (DSDs).

Being intersex is not about gender identity or sexual orientation; it's about physical sex traits and genes. Depending on the cause, symptoms related to being intersex could include:

A person who is intersex could have what's called true gonadal intersex, having both ovarian and testicular tissue. They could also have a complex or undetermined disorder of sex development that doesn't fit neatly into any of these categories.

"People can have combinations of chromosomes, XX or XY; some have mosaics of chromosomes in some cells and not others," Arlene Baratz, MD, board member of the Androgen Insensitivity Syndrome-Disorder of Sex Development (AIS-DSD) Support Group, told Health.

Individuals who are intersex are considered a health disparity population by the National Institutes of Health (NIH), said Dr. Baratz. But people who are intersex typically face the unique challenge of deciding how they want their bodies to look. "Sometimes those choices are made for intersex individuals before they're old enough really to even express themselves," added Dr. Baratz.

Georgieann Davis, PhD, an associate professor of sociology at the University of New Mexico and author of "Contesting Intersex: The Dubious Diagnosis," was born with complete androgen insensitivity syndrome, which results in female-associated external genitalia but XY chromosomes and undescended testes. "My parents, in my case and many others, didn't know I was intersex until I was in my teenage years and I didn't menstruate," Davis told Health. "That's when they discovered what they didn't expect to find inside."

In the past, if a baby was born with intersex traits, doctors and parents may have chosen a sex assignment for the child and may have elected for surgery so the child has a penis or vagina. While doctors and parents still often choose gender assignment surgery for children who are intersex, this issue is not without contention. More and more, parents forgo surgery and let the child decide at a mature age if surgery or treatment is desired.

The ISNA advocates this shift—the organization recommends parents wait on genital surgery until a child is mature enough to make an informed decision for themself. Before making a surgical decision, the ISNA also recommends that the child should be fully informed and introduced to people who have and have not had the surgery.

"Many of these surgeries are not necessary for the health and well-being of the child," Ellen Feder, PhD, a professor of philosophy at American University in Washington, DC, told Health. Well-meaning parents may be simply uninformed about what it means to be intersex, or doctors advocate surgery because they feel that parents won't love an intersex child, said Feder.

"If something is framed as a medical problem or emergency, parents are likely to move forward with medical intervention because that's the option they're presented," said Davis. "Parents may later express decisional regret because they didn't have the information presented to them, that [intersex] is a natural variation of one's body that does not have to dictate one's gender identity."

Indeed, "doctors have started realizing that the approach they've used has resulted in a lot of people feeling they were sexually and medically violated," said Dreger. "Thirty years into the intersex rights movement, we have yet to hear from anyone who has come out to say, 'I'm glad my parents chose surgery for me.'"

How To Provide Support

"The most important thing would be to advocate for people to make their own choices about their bodies," said Dr. Baratz. "The person having that intervention has to have some agency in the decision."

Davis suggests that parents of intersex children reach out to other parents of intersex kids. Then, they can rely on these parents' experience and support so their children can make informed decisions about their bodies. "I haven't met an intersex person or activist who's been against surgery," said Davis. "We're against having these surgeries done on those who don't have a say in what's done to their bodies."

Both Davis and Dr. Baratz also emphasized the roles of psychosocial support in the form of psychiatric counseling as well as support groups to help individuals who are intersex navigate any challenges. According to a PloS One study published in October 2020, 53.6% of the study participants self-reported that their mental health was fair or poor. On top of that, many of the participants noted that they had been told they were experiencing depression, anxiety, and post-traumatic stress disorder (PTSD).

"We, as advocates, would like to see the psychosocial part of care be the predominant thing," said Davis. "While surgeons and endocrinologists are key, psychological counseling is of utmost importance in handling our unique identities and traits in day-to-day life. There's no proof that growing up with a body that looks different is inherently harmful."

As noted by MedlinePlus, intersex is a complex condition rooted in genetics. If a person chooses to pursue treatment for the condition, it should be on their own terms. Finally, being an ally to intersex individuals means ensuring that those individuals feel they have a sense of agency and autonomy. 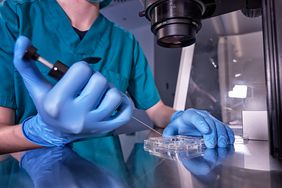 Can You Pick a Baby's Sex Using IVF?
23 LGBTQ+ Pride Flags and What They Represent