Ronald Lubelchek, MD, is an infectious disease specialist in Chicago, Illinois. He currently serves as an attending physician at John H. Stroger, Jr. Hospital of Cook County, an assistant professor in the department of internal medicine at Rush University Medical Center, and the medical director of tuberculosis care for the Cook County Department of Public Health. Throughout much of Dr. Lubelchek's career, his research focus has been on the improvement of accessible testing and care for people living with HIV, particularly those in the Chicago area. He previously held the position of medical director of the Ruth M. Rothstein CORE Center in Cook County, which is one of the largest HIV/AIDS clinics in the US. During the COVID-19 pandemic, he participated as a co-investigator in several COVID treatment and vaccination clinical trials while also caring for patients with COVID. Dr. Lubelchek received his medical degree from the University of Illinois School of Medicine in Rockford, Illinois. He completed his internal medicine residency at Washington University/Barnes Jewish Hospital in St. Louis, Missouri, and his infectious diseases fellowship at Rush University/Cook County Hospital in Chicago, Illinois.

Chlamydia is the most-reported bacterial sexually transmitted infection (STI) in the United States, according to the Centers for Disease Control and Prevention (CDC). In 2020, about 129 million new cases of chlamydia were logged, the World Health Organization (WHO) estimates, three to four million of them in the United States.

Chlamydia is spread through sexual contact with another person, mostly affecting younger people between 15 and 24 years old. Because the STI is so common, it's helpful to understand how it's transmitted.

What Are the Symptoms of Chlamydia?

You may or may not develop symptoms, but here are what to watch for:

discharge from the penis or vagina

bleeding between periods and after sexual intercourse

Less frequently, you may develop symptoms elsewhere in your body if infected genital fluids are transported to those places.

In your eyes: If you get infected fluid on your hands and rub your eyes, you can contract chlamydial eye infections called conjunctivitis. The signs include pain, swelling, redness, and discharge.

In your throat: If you have oral sex with a person who has chlamydia, the soft, moist tissues of the back of the mouth and throat may be infected.

What Should You Do If You Get Chlamydia?

"When not detected or treated early, (STIs) cause harmful, sometimes, irreversible and costly clinical implications," according to a 2021 study published in the Journal of Public Health.

If you develop symptoms of chlamydia, contact your healthcare provider, who will likely prescribe antibiotics. The sooner you know that you are infected, the more quickly chlamydia can be cleared up. STI testing will help diagnose conditions early and should be done routinely if you are sexually active, advises Planned Parenthood.

Further, you'll want to make sure you talk to your partner if you have a confirmed—or potential—case of chlamydia. Communication is key so that everyone involved can get tested or retested and get the treatment they need.

Also, even if you've been treated for chlamydia before, you can get it again if you have sex with someone who has the infection, according to the CDC, which has provided specific guidelines for STI prevention, diagnosis, and treatment.

The best defense against chlamydia and all other STIs is using preventive methods, such as condoms and dental dams, when you engage in sexual activity. 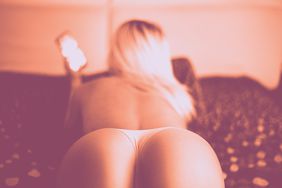