From who enjoys it the most to new ways to indulge to the risks that can land you in the ER, here's your ultimate oral sex guide.

It's one of the most intimate and private acts a couple can enjoy—which may be why there's so much mystery and misinformation surrounding oral sex. And while indulging in this once-taboo sexual activity (it used to be a punishable offense in some states, amazingly) can be a healthy part of any romantic relationship, there are definitely some things to keep in mind.

"I talk about this with patients almost every day in my practice," says Mary Rosser, MD, assistant professor of obstetrics and gynecology at Columbia University Medical College. "Of course, I'm usually the one who's bringing it up. Not many women want to or think to ask about it." That may be because oral sex still has kind of a risqué reputation to it, even though it's a pretty standard part of a typical couple's sexual repertoire.

Here's what she wants those women—and anyone engaging in or thinking about having oral sex—to know about the awesome benefits and potentially worrisome risks.

Surveys show that many people—including many young adults and teenagers who want to preserve their "technical virginity"—don't consider oral sex to be the real thing. Maybe it's because oral isn't penetration in a traditional sense, or perhaps it's because the act can't lead to conception.

But doctors say that oral sex is still sex, especially because it carries many of the same risks as intercourse if it's not done responsibly. "A lot of women focus on, 'Well, I won't get pregnant," says Dr. Rosser. "But I say there's another very serious issue with unprotected sex, whether it be vaginal or oral, and that is the transmission of sexually transmitted diseases. As doctors, we tell people that, in that sense, oral sex still counts."

Women give it more than they receive it

How many couples indulge in oral? Here's an idea: In a 2016 study in the Canadian Journal of Human Sexuality, approximately 900 heterosexual college students were surveyed about their most recent sexual encounter. More than two-thirds of those participants reported that oral sex was involved.

Some couples say that performing oral sex on each other helps them feel closer, says Dr. Rosser. But research suggests that people often engage in oral sex even if they don't really like it, especially women. That 2016 Canadian Journal of Human Sexuality study, for example, also found that men were significantly more likely than women (52% versus 28%) to report that giving oral sex was "very pleasurable."

"I tell my patients that yes, giving and receiving oral sex can strengthen certain relationships, but it can also put pressure on others and make them feel like they need to do this to make their partner happy," says Dr. Rosser.

It can lead to amazing orgasms

You probably already know this, and science backs it up. In one 2016 study, nearly 70% of women described receiving oral as "very pleasurable." This could be because of the direct clitoral stimulation oral offers. A third of women said that they need this kind of touching to reach climax, according to research published in the Journal of Sex and Marital Therapy from 2017.

Oral sex can land you chlamydia or gonorrhea

Although these sexually transmitted infections usually manifest in the genital area, they can also appear in the mouth and throat. "I have seen infections in which people think they have strep throat and they go to the student health center," says Dr. Rosser. "When they test positive for chlamydia or gonorrhea, they have to come to me for treatment." Curing either bacterial STI usually entails a course of antibiotics.

10 Mind-Blowing facts about the female orgasm

Herpes can also be transmitted from the genitals to the mouth and vice versa, says Dr. Rosser. "Traditionally, we thought that herpes type 1 caused oral outbreaks and herpes type 2 caused genital outbreaks, and that one stayed upstairs and one stayed downstairs," she says. "But now we know that's not true—you can get either kind in either place."

In 2016, a French woman became infected with the Zika virus not long after her male partner had returned from Brazil. Doctors determined that she probably got the virus—which is usually spread through mosquito bites—by performing oral sex on him.

Oral sex can transmit HPV, which can cause throat cancer

Doctors used to think that human papillomavirus (HPV), the most common sexually transmitted infection in the United States, couldn't affect the mouth. But recent research has them rethinking this notion. Scientists have now shown that the same high-risk strains of HPV that lead to cervical cancer can also be transmitted by oral sex and potentially cause head, neck, and throat cancer, as well.

Rates of HPV-related throat cancer are on the rise in men, especially those who smoke or have had five or more oral-sex partners, according to a 2017 study in the Annals of Oncology. The overall risk of developing an HPV-related cancer is still low—for both men and women. And most people who have HPV (even a high-risk strain) will not develop cancer. But if you have throat pain or notice strange symptoms that persist for more than two weeks, check in with a doctor.

Too much oral action might lead to an injury

Women should pay attention to how their vagina feels during and after oral sex, says Dr. Rosser, and make sure that it's not being irritated by scratchy facial hair or a too-enthusiastic tongue, for example. Oral sex can also alter a woman's natural pH, at least temporarily, but her body will usually self-regulate and bring things back to normal fairly quickly, before an infection can set in.

The key to making oral sex safe is to avoid mouth-to-genital contact and the transmission of any bodily fluids. Condoms, including flavored varieties, can be used to perform oral sex on men. For going down on women, thin sheets of latex called dental dams can be purchased online or in sex-toy stores. There's also the female condom, but like dental dams, these aren't as easy to come by as the male version.

If you don't have a dental dam, use a DIY option. Plastic wrap can also do the trick, says Dr. Rosser. "You can even cut a condom open lengthwise and use that if you need to," she adds.

These Are the Moves That Really Make Women Orgasm, According to Science

Your dentist might want to talk to you about it

The dentist's chair may seem like the last place you should be getting quizzed about your sex life, but some doctors think that should change. In an article published in January 2018 in the Journal of the American Dental Association, a group of physicians argued that dentists are in a unique position to screen for and speak with their patients about HPV-related cancers and the risks of unprotected oral sex.

Knowledge about the link between HPV and throat cancer varied among dentists interviewed for the article; some reported already discussing the connection with their patients, and most reported conducting cancer screenings. But dentists should do more to create awareness and increase patients' knowledge about HPV, the authors wrote—including providing information about vaccination and prevention practices.

There’s more than one way to enjoy oral sex

"Grapefruiting" is not a good idea

Using sex toys to make oral sex more exciting is one thing; using citrus fruit is another. That's where "grapefruiting" comes in: This practice involves cutting the ends off a grapefruit, making a hole down the middle, and moving the entire fruit up and down a man's penis while also stimulating him with your mouth.

This trick was mentioned in the movie Girls Trip, and demos can even be found on YouTube. But a urologist previously told Health that it's definitely not a good idea. "The urethra isn't designed to handle grapefruit juice," Michael Eisenberg, MD, a urologist at Stanford University Medical Center in California, said in 2017. In fact, the acidity can lead to side effects like burning during urination.

Why Grapefruiting Is Not a Good Idea

What you eat might change the way you taste

You may have heard that eating foods like pineapple can change the taste of your vagina. And while published studies on this topic don't seem to exist (unsurprisingly), anecdotal evidence lends support to the idea that pineapple can make a difference. In 2017, Alyssa Dweck, MD, a New York–based ob-gyn and co-author of The Complete A to Z for Your V, told Health that her patients have said they definitely notice a change "in a good way" after eating pineapple.

Koushik Shaw, MD, of the Austin Urology Institute in Texas, also previously told Health that eating foods with higher sugar content, like fruit, could possibly make bodily fluids taste a little sweeter. But that effect wouldn't be noticeable right away—especially not in men, since "prostate fluid in ejaculate can be made weeks or months before," he said.

If you've ever given a man oral sex and wondered about the potential health risks of swollowing his semen (assuming he's free of sexually transmitted infections and the Zika virus, that is), rest easy; there's no evidence it can cause any harm. Some studies have even suggested that exposure to semen offers strange health benefits—like a reduced likelihood of preeclampsia or depression.

But those studies only looked at associations, and there are other factors to consider, experts say. "I don't know of any major studies on whether women should or shouldn't swallow, but what I've learned is that it probably doesn't make a difference either way," says Dr. Rosser. "I think it's really a personal preference." 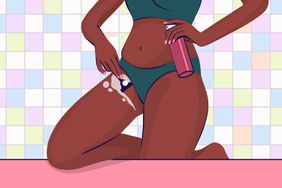