This Man's Penis Turned Black After His Partner Bit It—and Yes, That Can Actually Happen

Pain and blackening penile skin prompted the man to see a doctor.

As far as painful sex injuries go, this one is pretty brutal—whether you have a penis or not, it will make you wince.

According to a paper published in the January 2020 issue of the Visual Journal of Emergency Medicine, a 43-year-old man had the tip of his penis (aka, the glans) bitten by his partner during sex. It resulted in what initially seemed to be a relatively minor wound but got worse over the next five days. As the pain worsened and the tip started to turn black, the man figured it was time to get some medical help.

He received intravenous antibiotics in the emergency room and was examined by doctors from urology and the infectious disease department, who told him he had necrotic tissue, which means cells at the tip of his penis had died. The paper includes a pretty graphic image of the wound, which you can check out if you’re brave enough.

Thankfully, the man didn’t lose any part of his penis; after taking antibiotics his appendage was back to its normal color, although there was some “minimal glans penis deformity.”

“Patients who are bitten on the penis often do not seek immediate medical care, and the disease process often progresses,” writes the paper author, Marc Zosky, DO, assistant professor of emergency medicine at the University of Arizona College of Medicine – Phoenix. Dr. Zosky warns that a bite to the penis often progresses to skin ulceration and infection, which requires careful wound care and antibiotics. And in rare cases, a bite could result in a life-threatening infection like Fournier's gangrene, which is a medical emergency.

In other words, always get a wound on your bits seen by a doctor.

Sign up for The Health Hookup to get our best stories on sexual health delivered straight to your inbox each week! 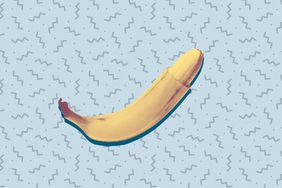 What Is Circumcision? 9 Things You Probably Didn't Know About Male Circumcision, but Should

Bacterial Meningitis Can Be Life-Threatening—What to Know About Causes, Symptoms, and Treatment
This Man Tried to Enlarge His Penis by Injecting It With Petroleum Jelly—and It Went Dangerously Wrong