Less than 50% of people who had vaginal sex during their periods used condoms.

When you have your period, do you stop your usual sexual habits? If you answered yes, you're not alone. In 2018, a survey by Clue, a period tracking phone app, and the Kinsey Institute Condom Use Research Team found that just 15% of menstruating people keep their normal sex routine when they have their periods.

For some people, having your period may change things in the bedroom. Does that mean you should change how you normally protect yourself from STIs and pregnancy?

Here is what research says about people having sex on their period and whether you need to use contraception at this time.

How Many People Have Sex on Their Period?

The researchers asked 95,000 people from 200 countries about period sex and condom use, and they found that people from different countries changed their routines at different rates. For example, only 8 to 9% of people from the United Kingdom, Hong Kong, and France continued their usual habits. Meanwhile, 20% or more of people from some Latin American countries kept their normal routines, though many people from these countries also reported avoiding all types of sex.

Overall, however, only 21% of the people surveyed avoided all sexual activity.

The researchers theorized that people changed their sexual habits due to taboos about the hygiene of period blood, reduced sex drive from cramps, and not wanting to get period blood on sheets or clothing.

How Many People Used Condoms?

Besides period sex, the researchers also asked people how they use condoms during their periods—and the results were concerning. Less than 50% of people who had vaginal sex during their periods used condoms and condom use declined 15% during period week. Do you really need to use condoms, or other methods of protection, while you or your partner are menstruating?

When it comes to deciding to use a condom or not, 20% of women said they are the sole decision maker, and three out of four women said they and their partner decide together. The survey showed that more women were active in decisions about condom use than the researchers had thought—only 5% reported that their partner was the sole decision maker on whether to use a condom.

Should You Use Contraception When Having Sex on Your Period?

Some people think they have no risk of becoming pregnant or getting a sexually transmitted infection (STI) during their period. Of the people who did not use condoms during their periods, 30% were less worried about pregnancy during period sex. About one-third were less concerned about STIs.

Unfortunately, you can still become pregnant during your period. It is not very common, but the risk is higher if you have sex during the end of your period or if you mistake other kinds of vaginal bleeding for your period.

"Some periods last more than a week and sometimes a woman's ovulation can overlap with menstruation," Tara Ford, a physician assistant at the Medical Center for Female Sexuality in Purchase, New York, told Health.

The survey respondents seemed to recognize this risk. Among the people who were not worried about pregnancy during their period, 50% didn't use condoms because they were using a different type of birth control.

As for STI risk, the number of people using other contraceptives was much lower—31%—among people who were not concerned about STIs during their period. This could reflect the fact that respondents weren't worried about their partner's status.

However, you have a higher chance of getting an STI during your period. It's important to remember that your cervix is more open during your period, so you have slightly higher odds of infection during unprotected sex, Dr. Ford said. Your vagina also loses its natural acidic protection, which also makes you more vulnerable.

Of course, other types of birth control, besides condoms, can also lower your risk of becoming pregnant. However, hormonal birth control (like birth control pills) does not protect against STIs. If you typically use condoms for STI and/or pregnancy protection, not using condoms during period sex can be risky.

With the risks of pregnancy and STIs in mind, take charge of your health and keep using condoms—or whatever contraceptive is your usual method of protection—all month long.

And while it's totally fine to change your usual sex habits when you have your flow, there's absolutely no reason not to have sex during your period. 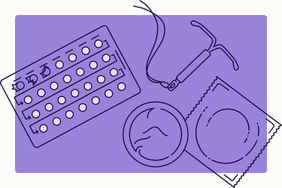 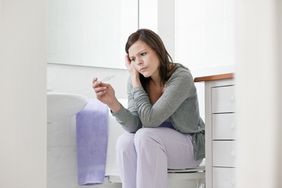