All about gender dysphoria including symptoms, treatment, and the controversy surrounding the condition.

If you are questioning your gender identity, you may be wondering what gender dysphoria means and what the symptoms are.

It's not just the feeling that the sex you were assigned at birth doesn't match the gender you identify with. That is part of being transgender, gender fluid, or nonbinary. Instead, gender dysphoria is when this mismatch causes you discomfort.

Learn more about what the symptoms, diagnosis, and treatment options, as well as other questions surrounding the topic of gender dysphoria.

What Is Gender Dysphoria?

"Gender dysphoria is a set of internal experiences that are defined in the 'Diagnostic and Statistical Manual of Mental Disorders' (DSM-5) to highlight the psychological and physical discomfort one has with the outward appearance of their sex and the internal experience of one's gender identity," J. Louise Newton, MSW, co-founder of Obsidian Care Collective in North Carolina, told Health. (Published by the American Psychiatric Association (APA), the DSM-5 is considered the "bible" for diagnosing mental illness.)

Gender dysphoria typically starts during childhood. But not everybody who fits the diagnostic criteria for gender dysphoria will have the experience so early in life. Some people may not experience is until after puberty, or even later than that.

What Are the Symptoms of Gender Dysphoria?

The Diagnostic and Statistical Manual of Mental Disorders (DSM-5) provides guidance on the symptoms and diagnosis of gender dysphoria.

Symptoms in Adults and Adolescents

According to the DSM-5, adults and adolescents may be experiencing gender dysphoria if they have at least two of the following symptoms for at least six months:

Additionally, children may be experiencing gender dysphoria if they have at least two of the following symptoms for at least six months:

For both children and adolescents, symptoms are typically associated with significant distress, or impairment in social, occupational, or other areas of functioning.

These symptoms may significantly affect how people cope with everyday life, affect social skills, the ability to form and sustain relationships, mental health, emotions, and academic or work performance.

What Is the Treatment for Gender Dysphoria?

If you wish to change your physical appearance, physical changes can include:

It's also possible to have a strong desire to be of a different gender than the one that corresponds with your biological sex—and to be treated as such—without seeking medical treatment or making physical changes.

You could also choose to socially transition. You may do this by adopting the affirmed gender's:

Others may not choose either social or physical transitions. Ultimately, the choice is up to you and what you feel comfortable doing.

People who are struggling with gender dysphoria may also struggle with mental health and may benefit from therapy where they can explore their feelings and experiences relating to gender identity and expression in an open and safe environment.

Public awareness and understanding of gender dysphoria are also crucial, to avoid adding significant external stress to the internal stress the person is bound to be experiencing already.

"In the case of children, it's most important for family members and teachers to resist the temptation to steer them—be it gently or harshly—as this can cause lifelong trauma-related stress," Newton said.

In 2013, when releasing the DSM-5, the APA replaced the term "gender identity disorder" with gender dysphoria. The new term was intended to be more descriptive, focusing on discomfort as the issue rather than identity and therefore destigmatizing the condition. The APA hoped that this would help people access more effective treatment for this discomfort.

However, the listing remains controversial. "While many people in the transgender and gender expansive community feel affirmed by the diagnosis (and the subsequent recommended course of treatment), many others believe that having a gender identity or expression that is different from the sex you were assigned at birth should not be considered a form of mental instability," Newton said. "Both camps are correct, as people experience gender dysphoria in very different ways."

The controversy doesn't end with the DSM-5 classification. "Many transgender and gender expansive community members feel very real discomfort in how others regard them—and at times police them—for falling outside of the more expected gender expressions," Newton said. "Some people are able to perform the gender expression that matches the sex they were assigned at birth quite well but have a general internal sense of unease. In some cases, transgender and gender expansive people may identify as gay or lesbian before they identify as transgender, but not always."

What Is Gender Euphoria?

In response to the continued DSM-5 classification, many transgender and nonbinary people are trying to emphasize the feeling of "gender euphoria." According to a 2021 International Journal of Transgender Health article, gender euphoria is the joyful feeling from an experience that affirms your gender identity. These experiences can include:

Misgendering: Why It’s Harmful and How To Apologize if You Do It

Does Gender Dysphoria Mean That You're Gay?

Gender dysphoria—and gender identity in general—is not the same as identifying as a different sexual orientation, such as gay or bisexual, which are terms that reflect who you are sexually attracted to.

It is also different from gender nonconformity, which is when people have behaviors that do not match the gender norms or stereotypes of their sex. Some examples of gender nonconformity can include females behaving and dressing in ways more socially expected of males, or adult males who occasionally wear stereotypically female clothing.

Gender dysphoria is a DSM-5 diagnosis that describes the physical and psychological unease a person might feel if their biological sex and gender identity do not align. If you think you might have gender dysphoria, help is out there.

You can seek out a local LGBTQ+ community support group and/or a psychotherapist through the World Professional Association on Transgender Health (WPATH). The free Trans Lifeline hotline can point you in the direction of resources in your community, and also provide help and support during times of crisis. And you can always discuss your symptoms with a healthcare provider and they can walk you through treatment options as well.

What Does It Mean To Be Gender Fluid?

Experts Explain What It Means to Identify as Transgender 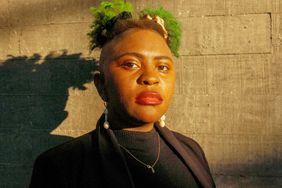 What Is Gynesexual? How Does It Differ From Gynephilia?
23 LGBTQ+ Pride Flags and What They Represent