What Is a Foot Fetish? We Asked Experts to Explain

A foot fetish is more common than most people think—here's what it means to worship feet.

Many people find one specific body part especially sexy, like butts, abs, legs, or breasts. For some people, that body area is the foot—and their sexual interest in feet is an attraction better known as a foot fetish.

Where does the word fetish come in? “In general, a fetish is any object, concept, or situation that is sexualized,” Ashley Grinonneau-Denton, PhD, certified sex therapist and co-director of the Ohio Center for Relationship & Sexual Health, tells Health.

Toe kissing and sucking, watching videos of feet, taking photos of a partner’s feet, rubbing someone’s sweaty feet after a workout, genital stimulation with feet, or describing foot odor to one’s partner are some ways a foot fetish can play out, says Grinonneau-Denton.

Here's everything you need to know about foot fetishes...and the foot fetishists who focus their desire on this body part you may never think twice about.

What Is Pansexual? Here's How It's Different From Being Bisexual

How common is a foot fetish?

More common than you'd think. While exact numbers are hard to come by, one study published in The Journal of Sexual Medicine arrived at one. In the study, researchers asked the roughly one thousand participants to rate their fetish interests from a score of 1 to 5 (5 being the highest). About 10% said they had a foot fetish, and the same percentage admitted to having a shoe fetish. Overall, more men than women said they sexualized feet or shoes.

Is a foot fetish, well, normal?

Yes—the word “fetish” just makes a foot fetish sound freaky. “To ‘fetishize’ something is often deemed an unhealthy obsession and is typically borne out of something being taboo or not normal," says Ghose. "Fetishizing is often not seen in a favorable light." Yet a more sex-positive approach is to ditch this line of thinking entirely and just consider a foot fetish another variation of healthy human sexuality.

Mark Ronson Comes Out as Sapiosexual—Here's What That Means

Just as with any sexual preference, "there are many different forms that foot fetishes can take,” says Grinonneau-Denton. As mentioned above, some foot fetishists prefer adorned feet. Others go for naked feet only. Some people fetishize footwear, such as stilettos or sandals, but others focus on less sexy shoes like sneakers or boots.

If you’ve ever seen Vanderpump Rules, you know that one of the actors on this reality show has a self-proclaimed fetish for sweaty, stinky feet. “I have worked with individuals who are highly turned on by sweaty tennis shoes and may have an inclination toward the smell, the dirtiness, or both,” says Grinonneau-Denton.

Another type of foot fetish is to fantasize about what will happen when the shoes come off, and what kind of foot is under the shoe, adds Grinonneau-Denton.

The All-Time Best Products to Care for Your Feet, According to Podiatrists

People get sexual satisfaction from feet because…feet are sexy

Having your feet touched feels good, too

If your partner is the one with the foot fetish and you’re on board with it, foot play can be very pleasurable for you, too. “There are a lot of nerve endings in the foot, which makes it a highly sensual erogenous zone,” says Ghose. You probably already know that a foot massage can feel amazing and even be a precursor to other sexual activities. But having your feet touched more sensually—teased with one fingertip, for example, or licked or sucked—can send tingles down your spine.

Remember, there’s no shame in finding feet and foot worshipping sexy. "As a society, we’ve historically gotten far too caught up in what we should and shouldn’t like sexually,” says Grinonneau-Denton.

Bottom line: a foot fetish is completely normal and healthy, so long as it doesn't become an obsession interfering with regular life, and assuming that a partner or other person involved consents to foot play. If you or your partner has a sexual desire toward feet, don’t be afraid to talk about it and explore it if you wish. 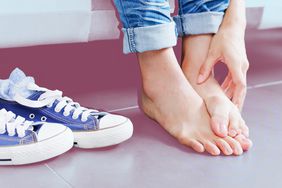 What Is Athlete's Foot—And How Can You Get Rid of It?