"This is something that isn't discussed a lot, but it's good to know about."

You probably do your best to avoid STDs (or STIs, aka sexually transmitted infections) by using condoms and getting tested regularly. But what about kissing—can you get an STI from lip contact? Since the topic probably didn't get a lot of airplay in your Sex Ed class, it's understandable if you have no idea what the answer is.

"This is something that isn't discussed a lot, but it's good to know about," Christine Greves, MD, ob-gyn at the Winnie Palmer Hospital for Women & Babies in Orlando, Florida, tells Health.

So, what is the answer? Here's what the experts say.

Can Having a Lot of Sex Give You a Loose Vagina? We Asked Ob-Gyns

Can you get an STD from kissing?

It's borderline mind-blowing, but yes, you can get an STI from kissing. "There are STIs that can be spread through non-sexual contact [like kissing] that are also spread through sexual contact," Martha Rac, MD, assistant professor of obstetrics and gynecology at Baylor College of Medicine, tells Health.

The overall risk of getting an STI from kissing is fairly low, but it is something that legitimately happens.

"This is definitely a possibility, and there are some STDs that we worry about more than others when it comes to kissing," Michael Angarone, DO, associate professor of infectious diseases at the Northwestern Feinberg School of Medicine, tells Health. In general, doctors say you're more at risk from mouth-to-mouth kissing, but there are some STIs (looking at you, herpes) that can be passed on by kissing someone's cheek, head, and even eyes, Dr. Greves says.

Which STDs can you get from kissing?

Here's a breakdown of what those are:

Oral herpes is usually caused by HSV-1, according to the Centers for Disease Control and Prevention (CDC). HSV-1 can cause cold sores (also known as fever blisters) on or around your mouth, or no symptoms at all. Most people who have HSV-1 were infected as a child or young adult from non-sexual contact with saliva, like kissing. "The greatest risk of transmission is when active lesions—cold sores on the mouth—are present," Dr. Rac says. A recent CDC survey found that 47.8% of people 14 to 49 years old have HSV-1.

HSV-2 usually causes genital herpes, but it can also cause oral herpes. "Sometimes if you practice oral sex, you can get HSV-2 around your mouth," Dr. Greves says, in the form of cold sores. If you kiss someone who contracted HSV-2 from oral sex or kissing, you could get it, too. Still, "it's more rare to get HSV-2 from kissing than HSV-1," Dr. Angarone says.

More than half of adults have been infected with cytomegalovirus, aka CMV, by age 40, according to the CDC. CMV doesn't usually come up in the main list of STIs, but the CDC points out that it can be transferred by sexual contact. The virus can specifically be passed on by semen and other bodily fluids, like urine, blood, tears, and breast milk, but "the greatest risk of transmission is contact with the saliva of a symptomatic person," Dr. Rac says. So if you kiss someone with CMV, you're at risk of contracting it as well.

While most people don't have any signs or symptoms, CMV can cause a fever, sore throat, fatigue, and swollen glands. And even though these symptoms will eventually clear up, once CMV is in a person's body, it stays there for life and can reactivate. Though rare, CMV can cause mononucleosis (aka mono) or hepatitis (inflammation of the liver).

Syphilis is an STI that can be spread by direct contact with a syphilis sore—and those sores can be found on or around the penis, vagina, anus, rectum, lips, or mouth, the CDC says. Symptoms depend on how advanced the infection is, but they can include firm, round, and painless sores at the site of infection; a skin rash; swollen lymph nodes; and fever. While it can happen, "oral syphilis is very rare," Dr. Greves says. It's so rare that it was featured in a 2016 case report.

What Is Palatal Petechiae? Viral TikTok Claims Dentists Can Tell if You've Had Oral Sex

How are STDs from kissing treated?

It depends on the STI. HSV-1 and HSV-2 can be treated with antiviral medications like acyclovir, famciclovir, and valacyclovir, according to the World Health Organization. But while these medications can help reduce symptoms, as well as how often they show up, they can't actually cure the infection.

Healthy people with CMV usually don't need treatment, the CDC says. But if you have a weakened immune system and you contract CMV, there are antiviral medications like valganciclovir that can help.

Syphilis can be cured with an injectable form of penicillin, the CDC says. If syphilis is at a later stage when it's diagnosed, more than one injection might be needed.

How to prevent STDs from kissing

This is a little tricky, since it's unlikely you're going to get someone's full sexual history before you kiss them. Still, doctors say there are a few ways to lower your risk.

Overall, doctors stress that your risk of getting an STI from kissing is fairly low. But if you see that someone has an obvious sore on or around their lips, it's best to take a pass on making out until it passes, just to be safe. 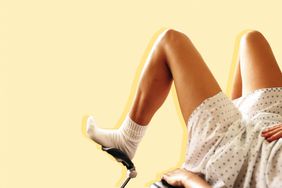