Here’s how to tell if someone’s having a seizure and which type may be happening.

Seizure symptoms go far beyond what you see in the movies, when a person drops to the ground and starts shaking. While that can happen, the reality is that there are many symptoms a person can have before and during a seizure—and some are more subtle than others.

Seizures can happen to any person at any time, so having a sense of what they look like can help you (or someone you love) know what's going on and get the right care. Here are some common signs and symptoms of a seizure, along with treatment options to consider.

Seizure symptoms can look different from person to person. Why the variation? Well, seizures are caused by a sudden, uncontrolled surge of electrical activity in the brain—and the seizure symptoms a person experiences depends on where in the brain those surges are taking place.

"Circuits are being activated without you actually pressing the key to activate them," Derek Chong, MD, MSc, vice chair of neurology at Lenox Hill Hospital in New York City, tells Health. "They're being hijacked. So you can get any feeling, any movement, any memory—anything your brain can do can be a seizure."

Generally speaking, the following can be signs and symptoms of a seizure, according to Johns Hopkins Medicine.

Still, it's important to note that even though seizure symptoms take on many different forms across individuals, they tend to be highly similar from one seizure to the next within a single person.

"In fact, the sameness of the symptom progression is one of the things we use to diagnose somebody that's having seizures," Dr. Rao says. "So the patient might say, 'First I feel A, then B happens, then C, then D, and then it's done.' And it's always like that: A, B, C, D."

What are the symptoms of seizures, depending on stage?

In some (but not all) cases, the first seizure symptom a person will have is known as an aura, according to the Epilepsy Foundation. This stage can include a strange taste or smell, headache, dizziness, or tingling in the body.

"Sometimes auras are very hard to describe, because they're so unusual and experiential," Dr. Rao says. "But they're very familiar [to the person having seizures], and they're sort of their warning that something's about to happen."

The silver lining to recognizing an aura (which can happen hours or even days in advance of an episode) as a seizure symptom is that it gives the person a chance to prepare for a potential episode. "They have a little warning before the full seizure takes hold," Dr. Rao says. "That might allow them to alert friends or family members or to get somewhere safe and not be in a physical space that would be dangerous if they were to lose consciousness."

After the aura comes the middle or "ictal" phase of the seizure, which is when brain cells are officially firing off without purpose. The seizure symptoms at this stage may include unintended thoughts, movements, or behaviors. This stage can last seconds or minutes, depending on the type and severity of the seizure.

Once a person reaches the end of their seizure (the "postictal phase"), he or she might feel totally normal, a little off, or pretty terrible. They may experience lingering post-seizure symptoms that include anxiety, sleepiness, confusion, fear, sleepiness, trouble writing or speaking, and more. They may also be recovering from physical injuries, such as bruises or cuts, that occurred during the seizure.

What are the symptoms of seizures, depending on type?

The exact symptoms of a seizure can depend on which type a person is having. Here's a breakdown of some common seizure types and symptoms to be aware of.

Previously called petit mal seizures (or mini seizures), absence seizures are a type of generalized onset seizure (meaning it begins in both sides of the brain simultaneously), according to the Epilepsy Foundation. They often go unnoticed because they start and end abruptly and usually last 10 seconds or less. Absence seizure symptoms may include suddenly stopping all activity, having a blank expression, staring off into space, fluttering eyelids, and eyes turning upward.

Focal onset seizures, which used to be called partial seizures, are the most common type of seizure among people with epilepsy, the Epilepsy Foundation says. They begin on one side of the brain and can last anywhere from a few seconds to 2 minutes. A person can have a focal onset aware seizure (or complex partial seizure), meaning they remain alert throughout the experience, or a focal onset impaired awareness seizure, which means they may not be fully conscious or able to respond.

Other focal seizure symptoms include:

Tonic-clonic seizures—formerly known as "grand mal" seizures—come with the seizure symptoms people are most familiar with, per the Epilepsy Foundation. During the first phase (tonic), a person's muscles stiffen and they may cry out or groan, lose consciousness, fall to the floor, and bite the inside of their cheek or their tongue. During the second phase (clonic), seizure symptoms can include a rapid, rhythmic jerking of the arms and legs and bending and relaxing of major joints (like elbows, knees, and hips).

Other tonic-clonic seizure symptoms can include:

Tonic-clonic seizure symptoms tend to last between 1 to 3 minutes (and it's important to call 911 if the episode drags on for more than 5 minutes). Following the episode, it's common to feel depressed, shaken up, irritable, or sleepy.

Quick, shock-like jerks in one or more muscles are the hallmark myoclonic seizure symptom. A person usually remains conscious and able to think clearly during this type of seizure. While each individual myoclonic seizure lasts only a second or two, a person can sometimes experience many of these seizures within a short period of time.

The name "atonic" describes the main symptom associated with this type of seizure: suddenly limp muscles. A person's body—either in part or in whole—may suddenly go limp, potentially causing them to fall to the floor if they're standing (hence why these seizures are sometimes called "drop attacks"). Other atonic seizure symptoms include:

How are seizure symptoms controlled?

Controlling seizure symptoms often involves medication. There are more than 30 anti-seizure drugs on the market, and "about two-thirds of people will have their seizures fully controlled by one or a combination of these medications," Dr. Rao says. The bad news is that, by default, a third of people who have seizures—more than a million in the United States alone—will have no such luck, per the Epilepsy Foundation.

But even if medications don't stop seizure symptoms (and the episodes themselves), there are other treatments available, including promising surgical options. However, the road to finding a treatment that works, assuming there is one, can be long and difficult; and as a result, many people who experience seizures often report depression and anxiety.

The medications are designed to dial down electrical activity in the brain, but they don't necessarily distinguish healthy, normal activity from bad, seizure activity. "So people feel tired and slow and dull and foggy and dopey and cloudy, and it doesn't feel nice to feel those things," Dr. Rao says. As a result, some people don't take their medication as prescribed, which in turn undermines control of seizure symptoms and events.

Lifestyle choices can also make a big impact on seizure symptoms. "I tell people, 'Listen, there are a whole bunch of things that are not in your control, like your genetics and the structure of your brain," Dr. Rao says. "But there are a bunch of things that are in your control, like taking your medicine, focusing on good sleep, good diet, minimizing stress, avoiding drugs and alcohol in excess. So my feeling is, maximize control [where you can], and then do your best with [everything else]." 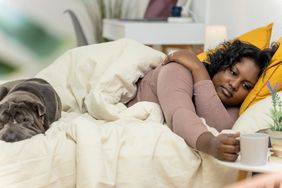