Epilepsy can include a range of physical, emotional, and cognitive changes. Knowing what to look for can help you get a correct diagnosis.

Seizures are the hallmark symptom of epilepsy, a neurological disorder characterized by abnormal activity in the brain. But having just one seizure doesn't necessarily mean you have epilepsy—in fact, epilepsy is generally diagnosed only after a person has at least two seizures without a known cause, according to the Epilepsy Foundation.

That might sound straightforward, but in reality, an epilepsy diagnosis can be tricky. Epilepsy symptoms can look different from one person to the next, largely because the seizures themselves can vary significantly. They can cause a range of physical, emotional, and cognitive changes—some of which are so subtle, a person may not even notice them.

Still, knowing the most common signs and symptoms of epilepsy (and seizures) can help put you on the path toward a diagnosis and treatment. Here's what to watch out for.

What are the symptoms of epilepsy?

According to the Centers for Disease Control and Prevention (CDC), epilepsy is sometimes called a "seizure disorder," because seizures are the main sign of epilepsy. But knowing if someone has had a seizure—or what type of seizure—isn't always easy. Seizures are caused by a surge of electrical activity in the brain, and they can affect just about any function your brain controls, including your feelings, consciousness, and movements.

Here are some of the more common seizure symptoms, per the Mayo Clinic. Once again, because epilepsy is technically a seizure disorder, regardless of the type of seizure a person is experiencing, which can also be signs of epilepsy:

The exact seizure and epilepsy symptoms a person experiences can depend on the specific type of seizure, which relates to where the electrical surge starts in the brain and how it spreads, according to the World Health Organization (WHO). In some cases, symptoms are so subtle or strange that a person may not even realize they're having seizures, let alone that they have epilepsy.

"I had a case where a woman got into a car accident, then for maybe five years [had these moments where she] felt like she was zoning out," Derek Chong, MD, MSc, vice chair of neurology at Lenox Hill Hospital in New York City, tells Health. "She really couldn't understand—like she couldn't even remember what would happen." It wasn't until after she had a convulsion that she learned these had been epilepsy symptoms all along.

If your seizure or epilepsy symptoms are odd, recurrent, and stereotyped (meaning they're always the same), that can be a tip off that you may, in fact, have the condition. "Then you're like, 'Well, actually those could be seizures,'" Dr. Chong says. Still, it's important for anyone who's had epilepsy symptoms to see a doctor for a proper diagnosis.

How do you know if you have epilepsy?

The symptoms you experience before, during, and after a seizure can help a doctor determine if you have epilepsy. A doctor may ask you a series of questions about your medical history and the days and hours leading up to the suspected seizure, such as whether you were stressed out, taking new medications, not sleeping well, or under the weather.

They'll also want to understand specifically what happened during the incident and immediately after. (And since you may not necessarily know everything you experienced, it can be helpful to bring someone who witnessed your seizure to the appointment.)

But epilepsy symptoms alone aren't usually enough to make a diagnosis. According to the Mayo Clinic, there are also a number of tests a doctor may order to determine if you have epilepsy. Those may include:

If it sounds like a lot, that's because it can be. There's no single test that can definitively tell if someone has epilepsy, unfortunately. But if you've had unexplained seizures, it's worth the effort to find out whether epilepsy is to blame (and if so, get treatment for the condition).

Epilepsy puts a person at greater risk of death, whether due to physical injury or because of a more random phenomenon known as sudden unexpected death in epilepsy (SUDEP), which kills one out of 1,000 people with epilepsy each year (usually only when seizures are uncontrolled), per the CDC.

"Nobody fully understands why you can die from SUDEP," Dr. Rao says. "But it's one of the motivations for why we feel so strongly we have to get [a patient's] seizures under control—because that is actually a way to decrease the risk." Plus, there are some mental health issues related to epilepsy that you may also need to address. Research published in the journal Epilepsy & Behavior shows that up to 30% of people with epilepsy have symptoms of depression, and they have a significantly higher rate of suicide than those without the condition. Understanding how epilepsy impacts mental health can help you spot early warning signs and get support ASAP.

How is epilepsy treated or managed?

Once epilepsy is diagnosed, it's time to come up with a treatment plan. The first line of defense is anti-seizure medication.

"These drugs work in several different ways, but they all have in common that they dial down electrical activity in the brain to hopefully prevent it from generating seizures," Vikram Rao, MD, PhD, an associate professor of neurology at the University of California, San Francisco, tells Health.

There are more than 30 types of anti-seizure medications available. While there may be some trial and error until you find the formula and dosage that works for you, at least half of people newly diagnosed with epilepsy find that the first medication they try successfully controls their seizures.

Unfortunately, medications don't work to control epilepsy symptoms for about a third of adults with the condition, according to the Epilepsy Foundation. In those cases (called drug-resistant epilepsy), doctors might recommend surgery to remove that part of the brain where seizures occur. A variety of other treatments, including vagus nerve stimulation, the ketogenic diet, deep brain stimulation, and responsive neurostimulation, can also be used to potentially control epilepsy symptoms.

"None of these is a perfect treatment, otherwise we'd have cured epilepsy," Dr. Rao says. "But all of these things can help." 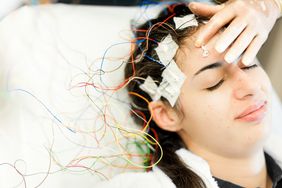 What Is Charcot-Marie-Tooth Disease? Singer Alan Jackson Says He Has This Degenerative Nerve Disease