Here's How You Can Develop Rosacea as an Adult

After washing off her makeup, the actress, Lena Dunham, discovered "hundreds of tiny pimple blisters."

Lena Dunham has never cared much what other people say or write about her body, her weight, or her looks. But this week, the actress revealed that she's dealing with a new issue that actually made her extremely self-conscious and upset: At age 31, she suddenly developed rosacea.

"[A] few weeks ago, a course of steroids to treat a massive flare of joint pain and instability led to rosacea's appearing overnight," Dunham wrote Tuesday on Lenny Letter, "making me look like a scary Victorian doll, two perfect pink circles painted on her porcelain face." (Along with endometriosis, the actress has an autoimmune disease that causes chronic pain and fatigue, she explained.)

Then, after wearing makeup for a long and sweaty shoot, Dunham wrote that she washed her face "to reveal that the rosacea had become hundreds of tiny pimple-blisters that covered me from forehead to neck." She described feeling a mixture of terror, rage, and sadness at that moment, and wrote that "my face burned, but not as badly as my pride."

Dunham's right: A skin condition like rosacea—which causes unusual flushing and sometimes pimple-like bumps to appear on the cheeks or other areas of the face—can be seriously embarrassing. But she should take some comfort in knowing that she's not alone: According to government estimates, about 14 million people in the United States have rosacea.

But what exactly is rosacea—and is it common to develop it in adulthood, after years of clear, glowing skin? To learn more, Health spoke with Temitayo Ogunleye, MD, assistant professor of dermatology in the Perelman School of Medicine at the University of Pennsylvania. Here's what she had to say.

Rosacea Can Appear at Any Time

The exact cause of rosacea's trademark redness and bumps hasn't been established, but scientists do know it occurs when blood vessels beneath the skin dilate, and increased blood flow makes the skin appear flushed.

Rosacea is different from acne, however, and it's common for it to appear in a person's 20s or beyond. "I see patients in their 40s, 50s, 60s, 70s who develop it out of the blue," says Dr. Ogunleye, who has not treated Dunham. "Usually it's not something they're are doing differently; it's just something that begins on its own."

The condition is most commonly diagnosed in fair-skinned people of European descent, Dr. Ogunleye adds, but it can occur in people of all ethnicities and all skin types. (It may just be less noticeable and underdiagnosed in people with darker skin tones.)

It Can Range From Mild To Severe

Dr. Ogunleye describes rosacea as a "spectrum of a condition." Most often, redness appears on the cheeks, but it can also appear on the forehead, nose, and chin. "Some people who have this ruddy complexion aren't bothered by it," she says. "They just accept that this is what their skin does, and they're okay with it."

Other people complain about easy flushing and blushing, which usually happens as a result of different triggers—including heat, cold air, sun exposure, hot foods, caffeine, or embarrassment. "And this isn't normal flushing we're talking about," she says. "It's flushing that lasts for 10 minutes or longer."

Some people with rosacea may also develop acne-like bumps or blisters, while others—often middle-aged men—develop thickening of the skin around the nose. One type of the disease can also cause eye redness and dryness, as well.

Rosacea is a chronic condition, and there's no cure. But antibiotics—either oral or topical—may help reduce its symptoms, especially for people who have skin sensitivity or those pimple-like bumps. (Sounds like Dunham was experiencing both of those symptoms: She wrote that her face "felt like someone had given it a nice, slow sandpaper massage by candlelight.")

"The flushing itself is actually the hardest part to treat," says Dr. Ogunleye, "although topical antibiotics may take the redness down a little bit. Paying attention to your triggers, and learning to avoid them, can also help.

For people who are really bothered by their condition, doctors can also recommend topical creams and moisturizers that temporarily reduce redness or laser treatments that can shrink the underlying blood vessels and last for several years. These options can be expensive, though—the laser treatments run several hundred dollars—and aren't covered by insurance.

The Best Body Washes for Sensitive Skin, According to Dermatologists

Medications Can Cause Rosacea-like Symptoms

Dunham wrote that she's stocked up on "creams and potions," along with "antibiotics and probiotics," and that she doesn't know what to expect going forward. But because her condition appears to be steroid-induced, it may only last as long as she's on medication. (Of course, that could also be long-term, based on her other health issues.)

According to research cited by the National Rosacea Society, the use of corticosteroids can cause rosacea-like symptoms (including visible blood vessels, bumps, and pimples) that worsen with triggers such as stress, heat, or sun exposure. In these cases, stopping the medication can lead to skin improvement.

No matter what's in store for Dunham's skin, it seems that writing about it has helped her face her emotions around the issue. She also hopes it helps other young women "understand that nobody is immune from feeling bad about hateful attention."

Dunham also seems determined to embrace her new condition, despite her initial reaction. "I love myself. I think I'm grand ... I have a bunch of blister-pimples," she wrote at the end of her essay. "All are true. All are fine. None are forever. I promise you." 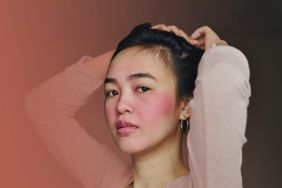 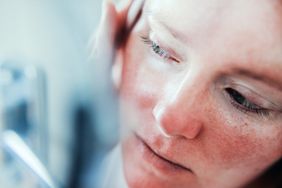 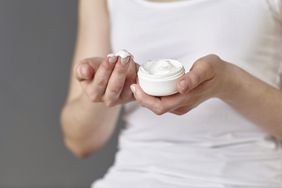 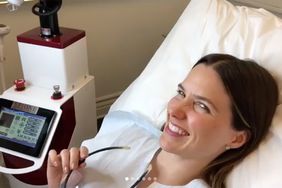 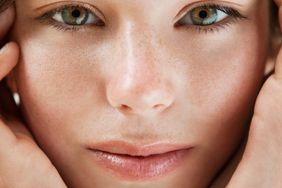 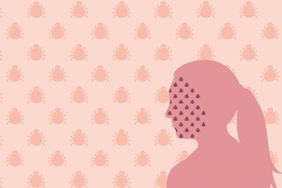