The drug named tofacitinib—along with two other JAK inhibitors—must now carry FDA warnings about the risks.

A newer rheumatoid arthritis drug may increase the risk of cardiovascular disease and cancer, compared to older drugs, according to a new study published in the New England Journal of Medicine (NEJM).

The research was mandated by the US Food and Drug Administration, following safety signals about the drug tofacitinib (Xeljanz)—specifically that it was found to increase in lipid levels and incidence of cancers. As a result of the study, the FDA is now requiring warning labels about tofacitinib and other medications known as Janus kinase (JAK) inhibitors—baricitinib (Olumiant) and upadacitinib (Rinvoq)—indicating that they may cause serious heart-related events, cancer, blood clots, and death.

The three JAK inhibitors affected by the new warning have all been approved to treat rheumatoid arthritis (RA), a chronic inflammatory condition in which the body attacks its own joints, causing pain, swelling, and joint damage. Tofacitinib specifically is also approved to treat psoriatic and ulcerative colitis—two more autoimmune conditions. The new Boxed Warning for JAK inhibitors also comes with the recommendation that doctors only approve them if patients haven't responded to, or cannot tolerate, other medications known as tumor necrosis factor (TNF) blockers.

Here's what to know about the new research linking JAK inhibitors, specifically tofacitinib, to cardiovascular disease and cancer—and what that means for those who may be on the drugs, or may need it in the future.

What's the link between JAK inhibitors and cardiovascular disease or cancer?

The newest research published in NEJM did not look at all three JAK inhibitors used to treat rheumatoid arthritis, just tofacitinib. For the study, researchers enrolled more than 4,000 people for their Oral Rheumatoid Arthritis Trial (ORAL)—all with active rheumatoid arthritis who had failed treatment with methotrexate. Participants were 50 years of age or older and had at least one additional risk factor for cardiovascular disease (current cigarette smoker, hypertension, history of coronary artery disease, etc.).

In addition to MACE and cancers, study authors found that opportunistic infections (like herpes zoster and tuberculosis) and nonmelanoma skin cancers were more likely with tofacitinib than with TNF blockers. They also noted that incidences of death from any cause and of pulmonary embolism were more higher with the 10 mg dose of tofacitinib than with TNF blockers—which led researchers to switch the tofacitinib dose from 10 mg to 5 mg.

What does the FDA say about JAK inhibitors?

In an FDA Drug Safety Communication originally published in September 2021, the administration also confirmed the increased risk of heart attack or stroke, cancer, blood clots, and death with tofacitinib (Xeljanz/Xeljanz XR) following a review of the randomized safety clinical trial.

Because of that, the FDA moved to require new and updated warnings for the three types of JAK inhibitors: tofacitinib (Xeljanz/Xeljanz XR), baricitinib (Olumiant), and upadacitinib (Rinvoq). The warnings—which are now in place per a December 2021 update of the communication—are meant to inform people about the risks of serious heart-related events, cancer, blood clots, and death.

The FDA has also required health care providers to consider the risks and benefits of these JAK inhibitors before beginning or continuing therapy—primarily in patients who have cardiovascular risk factors or a history of cancer. JAK inhibitors are now also recommended as a final approach, if patients "have had an inadequate response or intolerance to one or more TNF blockers," the FDA says.

5 Things You Need to Know About Rheumatoid Arthritis

What does this mean if you're already taking a JAK inhibitor?

JAK inhibitors are an extremely common medication used to treat rheumatoid arthritis or other autoimmune conditions, Michael George, MD, an assistant professor of medicine in rheumatology at Penn Medicine, tells Health. About 1.3 million adults in the US—and about 1% of the global population—have rheumatoid arthritis, according to Medline Plus.

Though these JAK inhibitors do appear to carry an increased risk of health issues, especially in an already at-risk population, rheumatoid arthritis—the condition these medications are most commonly used to treat—also raise a person's risk of MACE and cancers, Jisna Paul, MBBS, a rheumatologist at the Ohio State University Wexner Medical Center, tells Health.

For those already taking Xeljanz or another JAK inhibitor, Dr. George says it's worth talking to your doctor about whether the medication is still right for you, especially if you have other risk factors for cardiovascular disease or cancer. "For people who have not tried a TNF inhibitor or other rheumatoid arthritis therapies before, trying to switch treatment is a consideration, especially for people at high risk of possible JAK inhibitor side effects," he says.

But for some patients on a JAK inhibitor, that treatment may continue to be the best choice—especially if it's working well. "There are many patients with rheumatoid arthritis whose disease is not well controlled even with a TNF inhibitor or other biologic," says Dr. George. "JAK inhibitors can be very effective in treating rheumatoid arthritis for some patients, even when other medications have not worked. In many cases, the benefits of the medication may outweigh the possible risks."

If you and your doctor agree that a JAK inhibitor is still the best option for treatment, the FDA suggests you remain aware of any warning signs of heart attack, stroke, or blood clot. Those include:

Experts also highly recommend against stopping your medication on your own, without first consulting a doctor and having another type of treatment lined up. "Keeping rheumatoid arthritis under good control is an important part of staying healthy," says Dr. George. "Any treatment changes should definitely be discussed with your doctor." 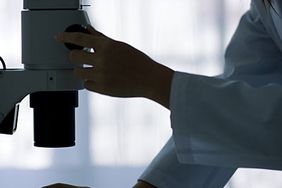