Meet two women who live with this rare condition, plus what doctors know about it.

Q'Londa Harden, 26 a California-based nurse, had very typical menstrual periods as a young teenager. But after she turned 16, getting her period meant more than just PMS. Each month, the skin all over her body would burn and swell, then peel off.

The first time it happened, "it literally felt like someone had lit me on fire," Harden tells Health. After a trip to the ER and some antihistamines, Harden and her family brushed it off—until the same thing happened again. "I felt the same burning and swelling, except now, wherever the swelling was, it left black marks like someone had punched me," she recalls.

After two years of regular emergency room visits and one staph infection, Harden was diagnosed with Stevens-Johnson syndrome (SJS), a rare skin disorder that attacks mucous membranes. Even more unusual, the condition would flare up for Harden due to hormonal changes brought on by her period. "[My doctors] said it didn't look like anything else, it's only triggered by my hormones," she says.

What Is Stevens-johnson Syndrome?

"SJS is something that we generally see as a severe, rare reaction to a medication," Mona Gohara, MD, an Associate Professor of Dermatology at Yale University, tells Health. "[Q'londa's] case is unique in that it is recurring."

Certain drugs like anti-gout medications, anticonvulsants, and some pain are known to cause SJS, according to Mayo Clinic. But New York-based dermatologist Rachel Nazarian, MD, agrees that the way the disorder presented in Harden is uncommon. "This type of reaction is completely bizarre, and not remotely the typical way people present with SJS," says Dr. Nazarian.

"Although hormonal fluctuations, including your monthly menstrual cycle, can theoretically trigger an autoimmune response, having one as severe as SJS is incredibly uncommon," adds Dr. Nazarian.

Because her flare-ups were caused by her period, Harden's OB-GYN prescribed her birth control pills, which would stop her cycle. Now she only has recurrences of SJS once every 3 to 4 months when she decides to have a period. "This was the first time since I was 16 that I had a normal period without any reactions," she says.

Hormones and Gastrointestinal Problems: How Periods and Menopause Affect Your Gut

Stacy Davis, 31, also has SJS, and it manifested in a more typical way. She developed the disorder in 2012, three weeks after taking an antibiotic prescribed to treat her acne. The reaction happened on her body skin and even inside her mouth, and it was so painful and difficult, that she was hospitalized.

"I needed help with everything—from bathing to going to the bathroom to eating; I had round-the-clock care from the hospital staff," Davis tells Health. "Before I could eat, I had to have my mouth numbed and thoroughly cleaned because I had developed a yeast infection in my mouth and vagina." It took her almost two years for her skin to recover.

"Generally, it is a diagnosis made on the appearance of the patient—like blisters on the mucosal surfaces and skin peeling off—and biopsy," says Dr. Gohara. Other signs include a fever, burning eyes, fatigue, and as the condition worsens, skin pain, rashes, blisters, and peeling, according to Mayo Clinic.

During Harden's flare-ups, the skin burning and skin peeling left her with ongoing wounds after the period ends. "It got to the point where I lost all of my skin from the top of my vagina down to my thighs, my butt, and to my back," Harden says. "I keep gauze, saline, and wound care supplies with me at all times."

Davis spent only a week in the hospital while she dealt with her symptoms, though the burning and peeling of her skin left her scarred. "My dermatologist shared that there was no guarantee that my skin would heal completely but with time and patience it did," Davis says.

"Treatment involves a coordinated effort with doctors from many specialties (such as dermatology and endocrinology) to make sure each involved system is supported," says Dr. Gohara. Harden's team included her allergist, primary-care doctor, and gynecologist to help her manage her recurrent SJS, including her choice to remain on birth control pills to minimize the number of flare-ups she has.

"With this disease, you're left with some kind of scarring," says Harden. "I've been having reactions on and off for years and my body is definitely discolored and scarred. For the most part, I'm fine, but there are days where I feel human. No one wants to feel self-conscious just walking their dog and people looking at you and being rude and staring constantly."

The Stress of Quarantine Is Triggering Psoriasis Flare-Ups. Here's What Derms Recommend

After Davis was discharged from the hospital, her dermatologist placed her on a steady regimen of ointments and pain medications to manage the itching and burning she experienced from SJS. "It took me time to regain my confidence and to get back to work, but after a few months of working from home, I finally got back into the swing of things," Davis says.

After living with her condition and scars for almost half of her life, Harden takes a "just do what makes you happy" approach to living. "Tomorrow isn't promised. I could have a flare-up, get a bad infection, and die tomorrow," Harden says. "I'm more open to trying different things. Now I go to concerts and dinner by myself. If I want to do it, I'll do it."

Skin Bias in Dermatology Is Endangering BIPOC—This Medical Student Wants To Change It
Was this page helpful? 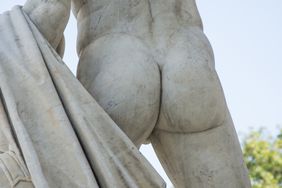