Symptoms of psoriatic arthritis can include stiff, swollen, painful joints, as well as changes to the nails.

Psoriatic arthritis (PsA) is an autoimmune disease related to psoriasis, a skin condition characterized by red patches and scales that can be itchy and painful. According to a 2019 study in the Journal of the American Academy of Dermatology, one in four people with psoriasis will develop psoriatic arthritis.

In the majority of people with psoriatic arthritis, the skin symptoms (psoriasis) develop first, followed by arthritis; however, in some people, the skin and joint symptoms start at the same time, and in 10% to 15%, arthritis shows up first, according to the "2018 Guidelines for the Treatment of Psoriatic Arthritis" of the American College of Rheumatology and National Psoriasis Foundation, published in the journal Arthritis & Rheumatology.

Psoriatic arthritis is characterized by swelling, pain, and joint stiffness. This painful condition can affect any joint in the body, but most often, it impacts the fingers, toes, ankles, knees, wrists, and lower back or spine.

Because many symptoms of psoriatic arthritis—such as joint pain and fatigue—can be vague, it is often called an "invisible" disease. These symptoms are also common with other conditions, including rheumatoid arthritis, sometimes making psoriatic arthritis challenging to diagnose.

However, other psoriatic arthritis symptoms are more identifiable.

At times a person with psoriatic arthritis may only exhibit symptoms in one or two of their joints, while at other times, the disease can impact several joints at once.

Often—although not always—psoriatic arthritis is asymmetrical, meaning a joint on one side of the body is affected while the mirror-image joint feels normal. For example, in the picture below, you can see the right hand has psoriatic arthritis, but the left hand doesn't appear to be affected.

Even joints close to each other in the body can be affected very differently. "You can have severely involved joints [with] nearby joints showing almost complete preservation," said Ted Mikuls, MD, professor of internal medicine in the division of rheumatology at the University of Nebraska Medical Center in Omaha. "It can be very spotty."

Psoriatic arthritis symptoms in the fingers can be very distinctive. One of these symptoms can be that the last knuckle of the finger (near the nail) swells and becomes inflamed, while other joints in the finger remain unaffected.

Other telltale signs of psoriatic arthritis can be seen on the nails themselves: Pitting, grooving, or other textural changes on the nail bed; changes in color; or thickening of the nails. Sometimes the nails can separate from the nail bed. According to the American College of Rheumatology and National Psoriasis Foundation 2018 guidelines, these nail changes occur in about 80% to 90% of people with psoriatic arthritis and can be confused with a fungal infection.

PsA Can Cause Deformity and Swelling of Fingers and Toes

According to research published in 2020 in the journal Diagnostic and Interventional Imaging, dactylitis (aka "sausage toes and fingers") is another common symptom of psoriatic arthritis. This is when the entire finger or toe swells up and looks like a sausage. A 2021 case report published in the journal Cureus states that dactylitis occurs in 16% to 49% of people with psoriatic arthritis.

Since psoriatic arthritis involves inflammation throughout the body, it can also affect other parts of the body in addition to the joints. Fatigue is a common—albeit vague—symptom. Psoriatic arthritis can affect the tendons and ligaments in the feet (as opposed to just the toes) and the joints in the low back.

Psoriatic arthritis can affect the eyes, too. According to the Arthritis Foundation, uveitis occurs when the vascular layer of the eye, called the uvea, becomes inflamed. If the eyes are affected, symptoms can include pain, redness, blurred vision, and light sensitivity. If left untreated, uveitis can cause vision loss. 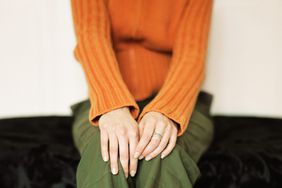 The Best Books, Apps, Websites, and More for People With Psoriatic Arthritis 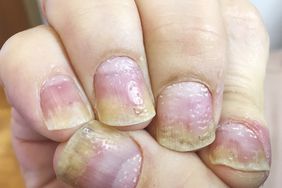