Sometimes having a condition like plaque psoriasis that's visible to others can be difficult. But you're not alone. More than 7.5 million American adults ages 20 and older live with the same skin condition, finds a June 2021 study in JAMA Dermatology.

Psoriasis is best known for its often red, raised, and flaky appearance on areas like the elbows, knees, and buttocks, although it can affect other areas as well, including the scalp, Adam Friedman, MD, professor of dermatology at George Washington School of Medicine and Health Sciences, tells Health.

Those common characteristics make it easy for dermatologists to diagnose during an exam, he says.

First, let's talk about why it looks so scaly. People with plaque psoriasis have an overactive immune system that causes their skin cells to grow at a fast pace—in only three to four days, says the National Psoriasis Foundation. However, the cells don't fall off as quickly, which means they build up on the surface of the skin.

This dead skin creates plaques and scales. They can vary in size and form single patches separated by healthy skin or groups of patches that join together and cover large areas of skin.

"Plaques are a little elevated. They form a plateau elevated above the surrounding skin. If you closed your eyes and touched psoriasis, you could feel it," Robert T. Brodell, MD, chair of the department of dermatology at the University of Mississippi Medical Center, tells Health.

He explains that the scales are referred to as "micaceous" because they resemble the mineral mica, which splits into very thin elastic plates.

"If you stuck your finger underneath one of the [psoriasis] scales, a broad white flake comes off, unlike some other conditions whereby you might have a fine scale, like dandruff, that doesn't stick together," he says.

Depending on the color of your skin, psoriasis may vary in its appearance.

"If you biopsy plaque psoriasis in patients of all races, they are identical," says Dr. Brodell. However, it may look different on the skin," he explains. For instance, he says Black or African American people may find that their skin becomes darker in areas of inflamed skin.

"Instead of having white micaceous scale, it will be dark because inflammation leads to the production of brown melanin pigment that drops into the deeper dermal layer of skin underneath psoriasis," Dr. Brodell says.

However, Dr. Friedman points out that some features of plaques and scales are the same throughout all forms of psoriasis and on all skin types, including the following:

Plaque psoriasis can be very itchy, causing some people to scratch.

"Irritated psoriasis in a patient that is doing lots of rubbing and scratching can become inflamed and have features of chronic eczema. The more you scratch, the more it thickens, and so on," says Dr. Brodell.

While both conditions may cause your skin to be red and inflamed, a dermatologist can tell the difference. Subtle differences in the appearance, location, and distribution of the rash are one set of clues. Another clue is whether the person has joint stiffness—due to the condition's connection to arthritis. These symptoms allow the diagnosis to be made without a biopsy or blood test.

The American Academy of Dermatology Association states that plaque psoriasis can occur on any part of the body but most often appears on a person's:

"One of the reasons we think psoriasis develops on the extensor elbows and knees [the outside skin surface] is because there's frictional stress [rubbing] on those areas," says Dr. Brodell.

If there ever was a time to have plaque psoriasis, Dr. Friedman says the time is now. "[The] question isn't how are you going to treat it, [but] it's which [treatment] are you going to pick because we have so many options," he says.

Once treatment begins to work after a flare-up, Dr. Brodell says the plaques may be gone, and the skin may be flat. But on lighter skin tones, redness may still exist, and on darker skin tones, darkness may remain.

"There's no scaling, there's no itching, but a little bit of redness or darkness is left behind that can often take months and months to go away," he says. 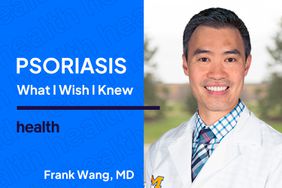 What I Wish I Knew About Managing Psoriasis in Different Populations