Look for these telltale signs.

When skin cells grow and pile up at breakneck speed, it can be hard to ignore the consequences. Besides altering your skin's appearance, it can make you feel quite uncomfortable.

Plaque psoriasis (the most common type of psoriasis) can affect any area of the the body, says the National Psoriasis Foundation (NPF). Common targets include the elbows, knees, scalp, and lower back, per the Mayo Clinic.

Symptoms vary from person to person and it look different depending on the color of your skin. We asked dermatologists to describe how plaque psoriasis affects the skin. Here's what to look for, plus how it may present differently depending on your skin tone and other factors.

People with plaque psoriasis have a dysfunction of their immune system that causes inflammation in the body, says the NPF. The inflammation presents itself on the skin as raised, red patches.

Robert T. Brodell, MD, chair of the department of dermatology at the University of Mississippi Medical Center, says that dermatologists can identify plaque psoriasis just by looking at the skin.

He adds that while some skin conditions have rashes that are "macule"—flat and reddened—this is not the case for psoriasis.

"With macule rashes, if you closed your eyes and touched them, you wouldn't feel them. But with plaque psoriasis, you would be able to feel the raised, red areas," Dr. Brodell tells Health.

Skins cells typically grow and fall off in a month's time, says the NPF. Not so with plaque psoriasis. With this condition, the immune system is overactive, causing skin cells to grow at a faster pace. But they don't fall off as quickly and, instead, collect on the surface of the skin. This creates a buildup of dead skin called scales.

The scales are referred to as "micaceous" because they look like the mineral mica, which has a thin, flaky-like texture that splits apart easily, explains Dr. Brodell.

While scales are often described as pink, white, or silvery, Dr. Brodell says this is often true for lighter skin tones. On darker skin tones, he says, the scales may be darker.

In a Black or African American person, inflammation of the skin may cause the production of brown melanin pigment that drops into the deeper dermal layer of skin underneath the psoriasis, explains Dr. Brodell.

Adam Friedman, MD, professor of dermatology at George Washington School of Medicine and Health Sciences, agrees, adding that this may cause the scales to look purple or yellowish.

Psoriasis comes from the Greek word psora, which means itch. However, Dr. Brodell says not everyone with plaque psoriasis feels itching with their condition.

For those who do itch due to dead skin build up, Dr. Friedman says the act of scratching those areas doesn't provide relief.

Scratching inflamed areas can also make the itching worse, says Dr. Brodell, and if the skin breaks open form scratching, it can cause bleeding and infection, in some cases. The trauma of scratching can also pave the way for the development of new psoriasis lesions—something called the Koebner effect, researchers note in a 2020 review article.

Scratching itchy and dry psoriasis plaques and scales can cause pain in those areas.

"The scales are stuck on [the skin]. When you peel it off, you get a pinpoint bleeding that's called Auspitz sign," says Dr. Friedman. Inflammation thins areas under the skin where capillaries sit. "So, when the scale comes off, the injury breaks the blood vessels, and when people scratch the area, it bleeds easily, which can add to the discomfort," he explains.

The location of the plaques on the body can also cause discomfort.

"Psoriasis can be painful because it's thick, and depending on where it is, it can decrease mobility, such as on the hands and elbows, so when you move those areas or they are touched, the plaques can crack, causing pain," says Dr. Brodell.

Another reason plaque psoriasis may cause pain is that one in three people who have the skin condition might also develop psoriatic arthritis, which causes swelling, stiffness and pain in and around joints, says the NPF.

"Some people with psoriatic arthritis get lower back pain at night and swelling in areas for no reason. Movement makes it better, but if you're sitting around, you can feel it," says Dr. Friedman.

When to see a doctor for plaque psoriasis

If you think you might have plaque psoriasis, don't wait until your condition is severe, advises Dr. Friedman. Your primary care doctor can refer you to a dermatologist who can diagnose your condition based on symptoms and medical history.

"In general, if there was ever a time to have moderate to severe psoriasis, it's now," he says. "There are so many effective treatments available, and more on the rise." 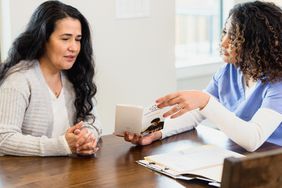