Sperm are subject to a range of threats. Here are 10 to dodge.

When it comes to conceiving a child, there are lots of things that can go wrong—sperm allergies, poor egg quality, and ineffective sperm. Approximately one in 10 couples are infertile, and it has been estimated that male factors alone contribute to 30% of cases, according to a 2015 study in Reproductive Biology and Endocrinology.

Though men produce millions of sperm a day (compared to the 300–400 eggs that women release during their lifetime), external factors (like temperature) can affect the health of these little swimmers. And because sperm cells take about 75 days to grow to maturity, harming them can affect your fertility.

Here are 10 factors that may affect a man's sperm.

Human testes cannot function properly unless they are able to stay cooler than the rest of the body. Thankfully, the male anatomy is designed to create distance between the testes and the core body temperature.

If the temperature of the testicles is raised to 98˚, sperm production ceases, according to Hal Danzer, MD, a Los Angeles fertility specialist. When production is interrupted, sperm can be negatively impacted for months.

"The overall number [of sperm] can be lower, as well as the motility and morphology," Paul Shin, MD, a urologist in Washington, D.C., told Health.

There is a grain of truth in the myth about hot tubs preventing pregnancy. "Wet heat" isn't good for the testes, and, according to a key study published in the International Brazilian Journal of Urology in 2007, even 30 minutes in a Jacuzzi or hot tub can temporarily decrease sperm production. In addition, a 2014 study in Human Reproduction found that sauna exposure induces a significant but reversible impairment of spermatogenesis, a cellular process that ensures that fertilizing sperm are produced.

According to Dr. Shin, wet heat exposure can impact a man's sperm for a surprisingly long time. Because sperm takes so long to mature, "any interventions [to reduce exposure] will usually take at least three, if not six to nine, months to show any benefit," said Dr. Shin.

"When I know that a man hasn't been in a hot tub, smoking dope, or wearing bicycle pants, and that the collection technique for his semen analysis was good, my first question is, 'Were you sick three months ago?'" Kurt Wharton, MD, a San Francisco ob-gyn specializing in infertility, told Health. Often, he said, his patients say yes.

A high fever can have the same effect as wet heat on a man's sperm—with the same lasting effects. And depending on the timing in the sperm production process, sperm concentration can decrease by up to 35% following a fever, according to a key 2003 study published in Human Reproduction. A study published in 2022 in the journal Reproductive Sciences found that fever from SARS-CoV-2 virus infection led to a reversible negative effect on sperm production.

Can a laptop computer really affect a man's ability to reproduce? According to a 2011 study published in Fertility and Sterility researchers found a direct correlation between laptop use and increased scrotum temperature—1°C elevation was reached at 11 minutes and continued to increase with time.

Scrotal temperature increase has a well-documented harmful effect on spermatogenesis (the process of male reproductive cell formation), so if you're trying to conceive, take the laptop off your lap.

Why do you think Scots brag about their fertility? "It's their kilts," said Dr. Wharton, though he admits the difference between boxers and briefs is usually not great enough to merit a change in sperm count.

"Boxers are better than briefs, if a man's sperm count is on the low side. But it probably has little effect if the sperm count is normal," said Dr. Danzer.

However, wearing tight bicycle shorts for an extended period of time is a bad idea, said Dr. Wharton. The more constricted a man's pants are, the less hospitable an environment he creates for sperm production.

Approximately 15% of men have varicoceles, or enlarged varicose veins in the scrotum, usually in the left testicle, according to Johns Hopkins Medicine. When a man is experiencing a low sperm count, healthcare providers may recommend varicocele repair, a procedure that repairs enlarged varicose veins in the scrotum surgically or via percutaneous embolization, a nonsurgical procedure using a catheter.

Though it's not clear, a varicocele may interfere with sperm production by interrupting blood flow, overheating the scrotum, or causing blood to back up in the veins supplying the testes, according to Johns Hopkins Medicine. Though there is little proof that fertility improves after varicocele embolization, some providers believe the surgery may improve semen quality.

The advice varies when it comes to keeping cell phones in proximity to a man's reproductive organs.

A 2008 study found that men with the highest cell phone usage (more than four hours per day) had significantly lower sperm counts, motility rates, and morphology (normal shapes)," said Dr. Shin. He recommends patients carry their phones in their briefcases rather than pockets in order to limit radiation exposure.

A 2022 study published in Reproduction, Fertility and Development found that mobile phone use had a negative effect on sperm motility, or movement, which can have a negative impact on fertility.

"Obesity has been associated with increased production of female hormones (estrogen), decreased sperm counts, sexual dysfunction, and infertility," Daniel A. Potter, MD, reproductive endocrinologist with the Huntington Reproductive Center in California and fellow of the American College of Obstetricians and Gynecologists, told Health.

"Tobacco, alcohol, and marijuana can impair sexual function," said Dr. Potter, who recommends that his patients limit or avoid all of these when trying to conceive.

In addition to slowing sperm down, cigarette smoking can damage sperm DNA and increase erectile dysfunction, according to a 2007 study in the American Journal of Epidemiology.

Marijuana isn't safe either. Smoking pot has been shown to reduce sperm count and function, and overall male fertility.

In addition to environmental factors, some physiological situations may negatively affect sperm, according to Dr. Potter.

Blockages. "Whether it's caused by a birth defect, infection, trauma, or vasectomy, a blockage prevents the sperm from entering the semen."

Genetic disorders. "Chromosome abnormalities can cause severely diminished or no sperm production." For example, one form of cystic fibrosis can cause the vas deferens not to form.

Are Penises Really Shrinking? Here's What the Science Says 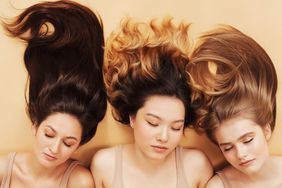