Walsh suffered one of those miscarriages while hosting "SportsCenter" live on-air.

There's no good place to have a miscarriage—but being a thousand miles from home and hosting SportsCenter live on television has to qualify as one of the more mortifying ways to lose a baby. This was my nightmare in November 2014 while I was working for ESPN, hosting a show live from Tuscaloosa ahead of an Alabama football game. I was three months pregnant, in the midst of a miscarriage, when I arrived to set early that morning.

I remember two things very clearly: First, my absolute panic as I texted my husband, Matt, who was half a country away, during commercial breaks. Second, my determination was not to let anyone around me or the viewers know what was happening. My coworkers were all men and none of them even knew I was pregnant, much less in the midst of a medical crisis. Yet my fear of being perceived as weak or unprofessional overrode my need to go to the hospital. As the only woman on our crew, I worried that if I let on what was happening, I'd be judged and that in the future, the network might decide it would be easier to send a guy to host a show instead of me. So I stuck it out.

But here's the thing: I shouldn't have had to stick it out. If I'd broken my ankle on set I would have easily asked for help and everyone would have understood that I needed to go to the hospital. But because I was having issues that were specifically female, I felt too ashamed and embarrassed to speak up for myself. So I finished my job. I flew home, my husband met me at the airport, and we went straight to the hospital, where I completed miscarrying the baby I had so deeply wanted.

RELATED: Miscarriages and Ectopic Pregnancies Can Lead to Long-Lasting PTSD, According to New Study

After the miscarriage, my husband and I knew we still wanted to keep trying for children—but the experience turned out to be much tougher than we could have imagined.

Anyone who has walked this path—the one of infertility and constantly trying to conceive—knows when it's not happening for you, it feels like it is happening for everyone else. Every celebrity on a magazine cover, every person you run into—even people who didn't want to be pregnant—seemed to be pregnant. I kept remembering how one of the first things my husband ever told me when we were dating was how important it was to him to someday be a dad, and I felt like I was failing him.

For our second shot at pregnancy, we decided to try intrauterine insemination (IUI), and it worked—until I had my second miscarriage. The next round of IUI ended the same: In heartbreak; a third pregnancy that would not end with a baby. I was given that news the night before yet another SportsCenter show on the road one year later from the first. It was a nightmare all over again. I plastered a smile on my face, tried to appear as though I wasn't pregnant, and got through the show. Inside I was dying.

Finally, in late 2015, I decided to go through egg retrieval in preparation for in-vitro fertilization (IVF). This involved dozens of doctor's appointments, hormone shots, and ultrasounds—all very time-consuming stuff—but I still felt like I couldn't tell anyone at work what was going on. It was incredibly stressful trying to hide extensive appointments from work so as not to disrupt my schedule and looking back, I made a tough time even harder by trying to maintain secrecy.

After three long, painful rounds of attempting egg retrieval, we were finally able to get two viable eggs, and I needed a break. The odds were not in our favor. For women in my age range—I was 38 at the time—the success rate of IVF is only 25 to 40 percent. I didn't want to implant them because I couldn't risk losing them and having my one last hope of carrying our baby crushed.

In June of 2016, I finally swallowed my fear and did the egg transfer.

After several nail-biting weeks, when I repeatedly blew off taking the pregnancy blood test in the doctor's office because I couldn't handle any more bad news, I finally took a home pregnancy test and discovered that we were, in fact, pregnant. But as any woman who's ever lost a pregnancy knows, that double line on the stick isn't relief—it's just the beginning of a new kind of worry: What if I lose this pregnancy too? It was a feeling that wouldn't go away the entire pregnancy.

So I didn't tell anyone I was expecting. Even after I found out we were having twins (we prayed one would work; we couldn't believe we'd really get them both) my husband said there was no way I'd be able to hide my pregnancy for long. But with strategic camera angles and holding various things in front of my stomach, I pulled it off almost until the end. It wasn't that I didn't want people to know; I just really, really didn't want to have to tell the whole world if I lost the babies—and losing babies was all I had ever known. I vowed not to celebrate anything until they were here. No announcement, no baby shower, not even a nursery until they arrived.

Finally, on January 30, 2017, due to some pregnancy complications, my twins were born prematurely. We weren't out of the woods, but I felt like I could finally breathe a sigh of relief. (They would immediately be taken to the NICU and I didn't even see them for two days after the birth because of my own medical issues.) A few days after they were born I announced their birth on social media. People were surprised but so kind, and for the first time in years, I felt safe.

But something kept pressing at the back of my mind. I remembered how alone I had felt all those years we were trying, how hard it was seeing all those other pregnant women when I so longed to be one of them, and how I'd beaten myself up that it wasn't happening for me. I knew that I didn't want anyone to feel that same loneliness. I also didn't want people to only see my happy ending—my beautiful, healthy babies—and think it had been an easy road. I didn't even want people to think I had the twins naturally. I had help, and I have no problem saying that publicly.

While I was on maternity leave, I lost my job—and for a second, I also worried I had lost my voice to speak up about my experiences.

I was laid off—a company-wide situation—a few days before I was scheduled to come back and host SportsCenter on Mother's Day. It was a show that in years prior had always been so painful for me to be on, and I was so excited to finally return with a different narrative (finally!) and share my story.

For a moment I didn't know if I had a right to share my story without my network platform. But I realized that even though I had lost my job on tv, nobody could take away my voice. So I decided to share my message on social media. That Mother's Day, my Instagram post wasn't just some perfectly staged picture about how great everything was to be a mom for the first time, instead, it revealed a glimpse of the struggles in our journey to get there. My hope was that if I had even one follower who was spending Mother's Day struggling with the things I had, they would know they were not alone.

The response was beyond anything I could have expected. Many of my old coworkers, including lots of men, reached out to tell me how sorry they were and how they wished they'd known so they could have helped me. It made me wish I'd dropped my armor earlier. I do believe that most people are sympathetic and they want to help—but that only works if you let them in. I hadn't been willing to take that risk and it cost me a lot of unnecessary emotional and physical pain.

But that was just the beginning: People from all over the country commented and messaged me to share their own fertility struggles. I'd get emotional reading story after story of heartbreak and triumph, of love and loss, of all the many ways people create their family. One woman, in particular, had a huge impact on me. She messaged to tell me that before she saw my post, she had given up, but that my story persuaded her to do one more round of IVF—and that she was now expecting her miracle baby.

Any time I've wondered if I should stop talking about it, it's stories like hers that make me even more determined to keep this conversation going. Infertility is a medical issue, and it shouldn't make anyone feel ashamed or embarrassed—and it definitely shouldn't be hidden. And as much as those suffering need compassion and understanding from others, we also need to be kinder to ourselves during the process and allow space for our own grief. In sharing my own story I had hoped to make just one person feel less alone—I had no idea I'd also realize I hadn't been alone in my own fight, either. 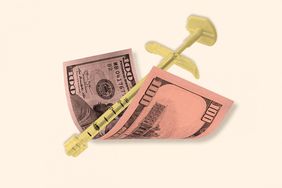