Size isn't the only thing about your breasts that's affected while you're pregnant.

Medically reviewed by Jane Van Dis, MD
Jane van Dis, MD, is a board-certified OBGYN and Assistant Professor at the University of Rochester. She most recently served as Medical Director at MavenClinic where she works to improve digital and telehealth services.
learn more

During pregnancy, a person's body goes through many changes as the baby—or babies—start to grow. You may experience body weight changes; a difference in hair, skin, and nails; swelling of hands and feet; or breast changes. Here's a look at some of the things that can happen to your breasts specifically during pregnancy.

Breastfeeding was previously thought to be the reason for ptosis, the medical name for breast sagging. However, an October 2021 study published in the SAS Journal of Surgery stated: "Pregnancies or weight changes, can highly affect breast ptosis because the skin elasticity and ligamentous support becomes attenuated"—which means that ptosis is the result of breast growth during pregnancy.

"When you gain weight during pregnancy, ligaments in your breasts stretch, just as they do in your abdomen," Fahimeh Sasan, DO, assistant professor of obstetrics and gynecology at the Icahn School of Medicine at Mount Sinai in New York City, told Health. You may not have that much control over the way your chest changes or how well these ligaments rebound can be credited to your genes. However, paying attention to how much weight you gain and lose may minimize sinkage, and surgery might also be an option.

Striae, or stretch marks, are common during pregnancy. In fact, according to the National Library of Medicine (NLM), stretch marks happen in 43% to 88% of pregnant individuals. All the stretching that occurs during pregnancy and breastfeeding causes the collagen and elastin in your skin to expand.

"A lot of this boils down to genetics, so if your mom or your sister didn't get stretch marks, chances are you won't either," assured Dr. Sasan. However, the opposite is also true, and you might be destined to have stretch marks due to heredity.

Per the American Academy of Dermatology (AAD), many remedies such as cocoa butter, almond or olive oil, and vitamin E have not been effective in preventing stretch marks. Thus, if you have concerns about the appearance of your stretch marks, it's always best to talk to your healthcare provider before applying moisturizers or doing anything else to reduce their appearance while you're pregnant.

When you are pregnant, it's normal for your breasts to get larger and feel fuller over time. Swelling of the breasts and nipples can occur due to milk duct system growth and the formation of glands that produce milk called lobules, according to Healthy Children, an American Academy of Pediatrics resource.

However, this does not mean that your breasts will grow to be similar in size. It is possible for your breasts to differ symmetrically during pregnancy—though the level of symmetry may differ from person to person, as noted in an American Journal of Human Biology study published in March 2015.

If any size discrepancy bothers you, consider switching to padded bras with removable pads so you can use them on one side. Additionally, cosmetic surgery may be an option in the future—either a breast reduction on one side or a small implant on the other.

Per Healthy Children, the end of the second trimester marks when your breasts have the capacity to produce milk. As a result, your breasts may leak. In most cases, this is your body's response to preparing for the baby's arrival. The liquid that you are most likely leaking is called colostrum—the first milk produced for babies, as noted by the Office on Women's Health (OWH). It starts off thick and yellow but then starts to lose color as the body prepares and produces breastmilk.

However, if you note bloody discharge coming from your breasts during pregnancy, seek medical attention as soon as possible to rule out any serious conditions.

The areolas (the skin surrounding the nipples) will get darker, as noted by Johns Hopkins Medicine. This skin darkening usually occurs within the first trimester of pregnancy. Additionally, blood vessels start to become more noticeable in your chest. You may also experience breast soreness as well as nipple soreness and tingling during the process of the milk duct system and milk gland production.

What Changes Can Happen to Your Breasts After Pregnancy?

If you're breastfeeding, you've probably noticed that any baby will trigger your let-down reflex—which is when the hormone oxytocin causes your milk to flow, per the NLM. Other offbeat stimuli for leaking breast milk include newborn baby smell, running water, and sex.

With every pregnancy, breast density tends to go down, Karen Soika, MD, a cosmetic surgeon in Greenwich, Conn., told Health. Ending up with asymmetrical breasts after your children have nursed is possible too. "The breast the baby prefers naturally stretches out, as can the nipple," said Dr. Sasan—that's why nipples may look bigger or elongated even after you've weaned.

It's important to know that your breasts may or may not return to their pre-pregnancy size and shape. "Some women's stay large, and others shrink," Dr. Soika said. This is due to a mixture of factors, including genetics, whether or not you have retained some of the baby weight, and your age.

Breast changes are to be expected during pregnancy. However, if you have any concerns about those changes, reach out to your healthcare provider for advice. 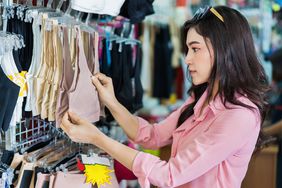 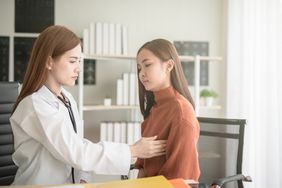