It's a simple procedure that can come with complicated concerns.

It's not unheard of for sperm to be retrieved from a dying—or even a deceased—individual through a process called posthumous sperm retrieval (PSR). The first documented PSR was reported in 1980, and the first baby conceived as a result of PSR was born in 1999.

Not all hospitals and fertility clinics will perform the procedure, and those that do have varying guidelines as to when and how it can be done, and who can request it, as suggested by an October 2019 Clinical Practice and Cases in Emergency Medicine study.

To learn more about how the procedure is done—and the medical and ethical issues that go along with it—Health spoke with Jesse Mills, MD, urologist and director of the Men's Clinic at UCLA, who has performed sperm retrieval on other patients, both living and deceased.

When Can the Procedure Be Performed?

According to Dr. Mills, sperm can generally be extracted from a patient who is brain-dead or shortly after he's declared deceased. The recommended time frame is typically 24 to 36 hours after death, per a February 2021 article published in Medicinski Glasnik.

"The sperm is only viable for a brief period of time, so most times the patient has to be already on his way to the hospital when he dies, or placed on life support, in order for this to even be possible," said Dr. Mills.

How Does Posthumous Sperm Retrieval Work?

To perform the retrieval, a surgeon or urologist may conduct an epididymal aspiration (extraction of sperm with a needle through the skin), a testicular biopsy, or a complete removal of the testicles.

Once the sperm is extracted, it can be frozen and stored the same way fertility clinics freeze a living donor's semen. When the deceased's partner is ready for pregnancy, healthcare providers can attempt to fertilize one of their eggs with the sperm in a lab setting using in-vitro fertilization (IVF). If the sperm was not ejaculated as semen, Dr. Mills said, a woman can't get pregnant through intrauterine insemination—a technique that places sperm directly into the uterus via a catheter.

The success rate of pregnancies using posthumously acquired sperm has not been widely studied, and neither has the health of children conceived this way. But a September 2015 Human Reproduction reported on four women undergoing IVF using sperm from their deceased partners, all of whom eventually got pregnant. One baby was born premature, but all four children "were shown to have normal health and developmental outcomes" at follow-up visits over the next seven years.

And although the actual retrieval of sperm is relatively simple, an August 2018 article published in the Journal of Law and the Biosciences noted the following: "Posthumous reproduction raises a wide range of legal and ethical issues…[that] include…the ownership of gametes, the inheritance rights and benefits of posthumously conceived children, and the social construction of families."

What Are Some Legal and Ethical Concerns?

The United States has no government regulations for when and how PSR can be performed; the decision is up to individual hospitals and fertility clinics. Whether or not a facility will agree to do PSR will also depend on if it has the specialists, equipment, and storage capabilities required for such a procedure.

The American Society for Reproductive Medicine (ASRM) issued updated guidelines on posthumous collection of reproduction tissue in 2018, stating that sperm or egg collection after death use is "ethically justifiable" if written documentation from the deceased authorizes it. In the absence of such documentation, programs should consider requests only from "the surviving spouse or partner," the opinion stated.

The ASRM's guidelines also state that "adequate time for grieving and counseling" should be allowed before any assisted posthumous reproduction and that clinics and hospitals should develop written policies if they do choose to offer the procedure.

Dr. Mills said that most clinics, including his own, require some sort of advanced directive from the man—or indication from a married partner—that the couple wanted children or was actively trying to get pregnant. "I've been called about the procedure more times than I've followed through because often the cases do not meet those ethical guidelines," Dr. Mills added.

But for the cases that do, Dr. Mills says that giving grieving partners and families the chance to preserve a loved one's reproductive tissue—and possibly bring their offspring into the world—"makes perfect sense" and can provide some hope and comfort during a very painful time.

"They're able to establish a family, and even though the father won't be around physically, that doesn't seem like any worse reason to bring life into this world," Dr. Mills said. "To me, it gives a tragic story a bit of an upbeat ending, for the wife, the grandparents, and everyone involved." 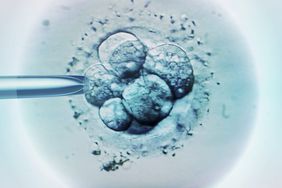