The facts about this "horribly named" condition from doctors and a woman who experienced it.

When Carolyn Spiro-Levitt was about 18 weeks pregnant, she started feeling some pelvic pain. She went to her doctor, but she was told the pain was probably just a typical pregnancy symptom, and there was no bleeding or cramping.

On June 15, 2020, the day of Spiro-Levitt's 20-week anatomy scan, she and her husband, Josh, received devastating news. She was diagnosed with an incompetent cervix (IC), which meant her cervix had opened prematurely under the weight of her growing baby. She was three centimeters dilated and almost fully effaced—a sign that labor was near.

What Is Incompetent Cervix?

"Incompetent cervix is a condition of pregnancy whereby the cervix dilates, without pain (like not getting contractions), classically during the middle three months of pregnancy," Mary Jane Minkin, MD, clinical professor of obstetrics at the Yale University School of Medicine, told Health.

The news turned the couple's life upside down. "When we found out about the IC, it felt like our whole future was ripped away from us," Spiro-Levitt told Health. "The especially cruel part about IC is that our baby was perfectly healthy—it was just my body that could not hold him."

Spiro-Levitt described incompetent cervix as a "horrible named term," and Dr. Minkin felt that obstetricians agree. "It's just an old term that's been around for a while—but what it really means is the cervix is opening too early without contractions happening."

The biggest issue with IC is that doctors often don't really know what causes it. "Some women are born with a congenital weakness of the cervix and may be without any identifiable risk factors," Rebecca C. Brightman, MD, a gynecologist in private practice in New York City and an assistant clinical professor of obstetrics, gynecology, and reproductive medicine at the Icahn School of Medicine at Mount Sinai Hospital, told Health.

One risk factor for IC is exposure in utero to diethylstilbestrol (DES), a synthetic hormone used in the past to prevent miscarriage. Other risk factors include an underlying connective tissue disorder, prior second trimester termination of pregnancy, and a history of cervical procedures, such as LEEP or cone biopsy.

"LEEP and cone biopsy are procedures that sometimes follow abnormal Pap smears, performed to treat cervical pre-cancer and cancer," said Dr. Brightman. "The thought is that forceful cervical dilation may disrupt the integrity of the cervix and impact the cervix's future ability to maintain a pregnancy."

Dr. Minkin said that in general, having biopsies of the cervix doesn't usually cause IC. "If someone has had a significant cone biopsy, we usually check her cervix and follow it through during the pregnancy to see if it is opening too early," said Dr. Minkin. "We can check it with our fingers or with an ultrasound."

What Are the Risks?

The risks of IC are what no parent wants to be faced with—severe prematurity or baby loss.

On the day of Spiro-Levitt's 20-week scan, she and her husband were told that there was a high risk they would lose their baby. They decided to go ahead with a procedure called an emergency cerclage, which involves putting a pursestrings suture around the cervix to keep it closed. However, doctors couldn't say for sure how long the stitch would hold. She was put on strict bed rest for the next few weeks, until, on the night of July 5, 2020 she woke up with contractions.

Within a few hours, the couple's son, Eli Parker Levitt, was born. He died within 15 seconds.

Can Anything Be Done About IC?

"Women who have a history of cervical incompetence during one pregnancy are at significant risk of having this recur in subsequent pregnancies," said Dr. Brightman.

Despite the huge tragedy she went through, Spiro-Levitt has been passionate about raising awareness of IC. "I wish more women knew about IC," said Spiro-Levitt. "I had never even heard the term and had no idea there was a possibility my cervix could dilate mid-pregnancy."

For many women, the dilation happens without associated symptoms. But Spiro-Levitt later found out that pelvic pain or pressure could be a symptom of an impending IC loss.

"I wish I had been more aware of signs and symptoms to look out for," said Spiro-Levitt. "Because IC is often caught at the 20-week anatomy scan, and the situation is typically dire at that point, I want to advocate for earlier cervical checks or ultrasounds which may be able to detect symptoms of IC and would allow doctors to intervene earlier. I also think it's important for women to know the risk factors for IC, so they know to ask to be checked for symptoms and monitored more closely."

Spiro-Levitt also encouraged women to advocate for themselves with their doctors and ask to be examined in person if anything feels amiss. "Being pregnant is an incredibly vulnerable state to be in," said Spiro-Levitt. "It's important that we make our voices heard if something does not feel right, and trust our instincts."

If you've been diagnosed with IC and would like to connect with Spiro-Levitt, or want more information on the condition, contact her at spirolevitt@gmail.com. 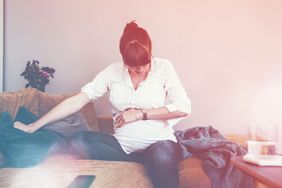 3 Signs Labor Is About To Happen