"Is it a boy or a girl?" It's the question on every pregnant woman's mind.

There are old beliefs out there that tell you if you use one particular sexual position when trying to conceive that you will have a boy. There are equally unusual beliefs that say if you eat certain foods it will encourage you to conceive a girl. But, can you really influence the gender of your future child, is it all up to luck, or are there other things at play in determining a baby's gender?

Many future parents place undue pressure on themselves by focusing too much on having a child of a specific gender. They might want to pass along a family name or experience of how it is to raise a girl. Future parents should remember, however, that while humans are born with male or female gentiala it does not mean that is how the child will identify themselves.

It's the question on every pregnant parent's mind—and on the minds of her friends and loved ones. But aside from deliberate, high-tech medical techniques—including those employed to prevent heritable diseases and something called sperm sorting—the odds of delivering a boy versus a girl are simply luck of the draw. Globally, male births only slightly trump female births—about 107 boys for every 100 girls—and in the United States, the ratio is even closer to 50/50.

Still, there may be a few surprising factors that can influence whether you end up with an XY or an XX as the fetus develops in the womb, says Fiona Mathews, program director for biosciences and animal behavior at the University of Exeter in the United Kingdom. Don't plan on using these strategies for family planning purposes, though: The ideas below "may sway the probabilities," she says, "but only to a small extent."

Babies conceived via assisted-reproduction techniques may be more likely to be a boy or a girl depending on the technique used, according to a 2010 study from the University of New South Wales in Australia. Researchers found that the percentage of male babies decreased to about 49% when couples opted for intracytoplasmic sperm injection (when the sperm is injected directly into the egg) and the fertilized embryo was transferred to the womb in the cleavage stage, after just two or three days.

The percentage rose, however, to 56%, when standard in vitro fertilization was used (eggs and sperm are mixed in a dish, rather than injected) and embryos were transferred in the blastocyst stage, four days after fertilization. The exact reason for this is unknown, says co-author Michael Chapman, but it likely has to do with the length of time an embryo is cultured in the laboratory. "Maybe boys are stronger," he says, theoretically allowing their embryos to survive longer outside the body.

A 2008 study published in the journal Proceedings of the Royal Society B found that women who ate more calories overall—and who ate cereal for breakfast and a potassium-rich diet specifically—were more likely to deliver boys. The following year, however, American researchers published a paper in the same journal, stating that the previous study's findings were "easily explained as a chance" and advising readers to "ignore claims from observational studies until replicated."

"I think the most important thing is for all women to have a healthy diet," says Mathews, lead author of the 2008 study. "If a woman is underweight and wishes to eat a little more to improve her chances of a male infant—as well as improving her general health—then I can't see anything wrong in that." On the other hand, cutting calories in an attempt to have a girl makes no sense and could compromise the health of both mom and baby.

People often try to guess the gender of an unborn baby based on the number of boys and girls already in the family, or the number of brothers or sisters each parent has. And when a British couple recently welcomed their first daughter—after the father's family had produced only sons for four generations and more than 100 years—it certainly seemed like they had defied some crazy, predetermined odds.

But does gender preference really run in families? "There may be some families with a genetic predisposition" for either boys or girls, says Chapman, although there's no published research to support this notion. As far as Mathews is concerned, "the available evidence suggests that this is just coincidence."

"There is evidence that intercourse closer to ovulation increases a person's chances of having a boy," says Chapman; "this is thought to be due to boy sperm surviving for less time before fertilization can occur." Male sperm, which carry a Y chromosome, have been shown to swim faster but not live as long as their female X-chromosome counterparts, according to a report in Harvard Health.

This theory, however, has also been debated. A 1995 study in The New England Journal of Medicine, for example, found no evidence that the timing of intercourse had any effect on babies' genders.

A 2013 Greek study found that in the two years following an earthquake on the island of Zakynthos, the rate of male births declined significantly. The researchers speculate that more fragile Y-chromosome sperm don't survive as well during periods of high psychological stress, or that stress may affect hormone levels in a mother's body and make them more hospitable to X-chromosome sperm.

In potentially related news, male heirs who've inherited fortunes from their families (but interestingly, not heiresses nor self-made male billionaires) tend to have more boys, according to a 2013 study published in the journal PLoS ONE. Men who haven't had to work for their money likely have lower stress levels than the overall population, the researchers speculate, as do their wives or partners. Again, this is still a theory and hasn't been proven to have a real effect on gender. And who is likely to inherit millions just to influence a baby's gender? That said, stress reduction--think yoga class--is a good idea for everyone, including those thinking about becoming parents. 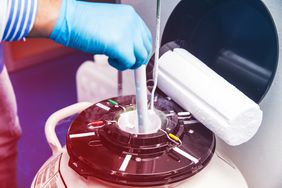 Pollution Is Causing Penises To Shrink: What Does This Mean for Fertility?