Though rare, there's a possibility it could happen.

Junior high sexual education class made us believe that if a boy so much as sneezed on you, you could get pregnant. And if he managed to get precum in the vicinity of your vagina? Well, you might as well start planning your baby shower.

As adults, we became curious: What are the odds of pregnancy from precum? To find out, we spoke to two sexual health MDs.

According to the American Pregnancy Association, precum, or pre-ejaculate fluid, is the substance that comes out of a man's penis when he's sexually aroused before an orgasm. It's released from the bulbourethral glands, also known as Cowper's glands, which are two pea-sized glands located between the prostate and the base of the penis. Unlike semen, which is released during ejaculation, precum contains barely any viable sperm.

12 Things You Should Know About Your Guy's Fertility

"Most of the evidence leans toward pre-ejaculate containing no sperm, or only very tiny amounts of sperm," Michael Reitano, MD, physician-in-residence for the men's health website Roman, told Health. "What sperm is found [in precum] tends to be poorly formed and immobile. Men are considered infertile if they have too little sperm, so the tiny amounts that may be found in pre-ejaculate are extremely unlikely to result in pregnancy."

Still, while pregnancy is highly unlikely, it's not impossible.

"It just takes one good swimmer," said Amanda Kallen, MD, assistant professor of obstetrics, gynecology, and reproductive sciences at Yale School of Medicine. In other words, it is possible for one hardy sperm in your male partner's precum to travel past your cervix and fertilize an egg.

No wonder "pulling out" is such a poor form of birth control. "The pull-out method, if used perfectly, has a failure rate of about 4%," Dr. Kallen said. "But in real life, it's more like 22%."

Even if a guy thinks he's pulled out in time, it doesn't always work out that way. "A man may believe he withdrew before the start of ejaculation, but the timing of an orgasm and ejaculation is not always perfectly coordinated," Dr. Reitano explained. "He may begin to ejaculate a moment before he senses his orgasm. What is released then is not precum, but the actual first small emissions of ejaculation."

So, if precum isn't supposed to carry sperm, what's the purpose of it? According to Dr. Reitano, it's a basic fluid that is released to protect sperm from the acid environment of the urethra and the vagina. It also aids in lubrication to some degree.

However, precum carries another risk besides a hidden sperm or two. "Precum can transmit sexually transmitted [infections]" Dr. Reitano said. "Precum may not have sperm, but it can easily contain any infectious material a person may carry, and this means the [infection] can be transmitted to a partner."

If you have worries about a potential pregnancy following unprotected sex, you can take Plan B, which is an emergency contraceptive designed to prevent pregnancy. Also, talking with your healthcare provider can help you determine what types of contraception—recommended by the CDC—will be best for you and your partner in the future.

9 Surprising Things Every Woman Needs to Know About Semen

Can You Get Pregnant if Your Partner Has a Micropenis? Here's What an Expert Says 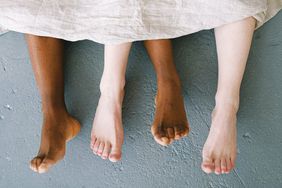 Great Sex: Add a Little Adventure
The G-Spot: What It Is and How to Find It