Should You Get the Pneumonia Vaccine? Here's What Experts Want You to Know

Doctors say the pneumonia vaccine is a good idea for most people at some point in their lives—but not everyone should get the shot.

As a child, you were likely vaccinated with whatever your pediatrician and parents recommended at the time. But, as an adult, you have to make decisions for yourself (under the guidance of your doctor, of course). And now you may be mulling whether you should get the pneumonia vaccine.

Of course, anytime you're presented with the opportunity to prevent a deadly disease, you should seriously consider taking it—but it turns out, this specific kind of vaccine isn't recommended for everyone. That means, if you don't meet certain criteria, it's unlikely your doctor will even suggest it to you.

How to Tell if You Have Pneumonia: 8 Symptoms You Shouldn't Ignore

What is the pneumonia vaccine, exactly?

The pneumonia vaccine helps prevent pneumococcal disease, which is any kind of illness caused by the Streptococcus pneumoniae bacteria. That includes pneumonia and meningitis, according to the Centers for Disease Control and Prevention (CDC). There are actually two types of pneumococcal vaccines in the US:

Who should get the pneumonia vaccine?

So that depends on which specific pneumonia vaccine you're talking about.

The CDC recommends that these groups get PPSV23:

The CDC recommends that the following groups get PCV13:

Here's where things get a little tricky: The CDC specifically says that adults 65 years or older should discuss and decide with their doctor if they should get PCV13—that's because that pneumonia vaccine used to be recommended for all older adults in the US, but the Advisory Committee on Immunization Practices (ACIP)—a group of top medical and public health experts in the country—helped to change that in 2019. The organization released a report at that time saying that PCV13 simply may not be necessary for healthy adults aged 64 and older.

"The effectiveness of this vaccine in kids is driving down cases in adults," John E. McGinniss, MD, a pulmonologist at Penn Medicine, tells Health, adding that it's "probably overkill" to give most adults PCV13, along with PPSV23.

The CDC does, however, recommends that adults 19 years or older with an immunocompromising condition, cerebrospinal fluid leak, or cochlear implant, get PCV13 before starting PPSV23.

Who shouldn't get the pneumonia vaccine?

If you don't meet the recommendations for the pneumonia vaccine, you really don't need to get it, pulmonary critical care expert Reynold Panettieri, MD, director of the Institute for Translational Medicine and Science at Rutgers University, tells Health. "It's a risk-benefit ratio," he explains. "If you're under 65 and are otherwise healthy, your likelihood of developing pneumococcal pneumonia is unlikely," he says.

But there are some people who explicitly shouldn't get the vaccines, per the CDC. Those include:

What are the side effects of the pneumonia vaccine?

Most people don't usually have serious side effects from either vaccine, but it's possible to have some mild symptoms.

The most common side effects with PCV13 include:

The most common side effects with PPSV23 include:

If you do happen to have side effects, CDC says they'll usually go away within two days.

What's the best time of year to get the pneumonia vaccine?

It's really up to you. "You can get it any time of the year," Dr. Panettieri says. "Pneumonia is most common in the winter and fall, but you can get the pneumococcal vaccine any time."

Just a heads up, per the ACIP: If you and your doctor decide that you should get PCV13, you'll want to wait at least a year until you get PPSV23. Research has found that waiting at least a year between these vaccines created the best immune response.

If you have any questions about the pneumonia vaccine and whether it's right for you, talk to your doctor for guidance. 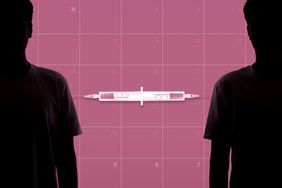