Why You May Be Gassy Before Your Period

Gas before your periods may not be pleasant, but it's perfectly normal—and here's why.

Cramps, breast tenderness, bloating, trouble sleeping, and increased appetite are more than enough premenstrual issues for one individual. However, extra gas before and during your period can also be part of your monthly cycle.

What Happens to Your Body on Your Period?

Some gastrointestinal (GI) symptoms during premenstrual syndrome (PMS) include:

Hormones can play a role in the way your digestive system works. For example, estrogen and progesterone, two hormones that increase and decrease throughout your period, might affect how quickly food moves through the GI tract.

A study in BMC Women's Health found that 73% of individuals surveyed had at least one GI symptom before or during their periods. While abdominal pain and diarrhea were the most common, this study showed GI symptoms are common before and during periods.

Why Gas Before Your Period Smells So Bad

Abbe Wain, MD, assistant professor of obstetrics, gynecology, and reproductive science at Icahn School of Medicine at Mount Sinai in New York City, explained why gas before a period might be worse.

Dr. Wain said that plenty of patients have complained of way worse gas when menstruation is about to start. Dr. Wain also said different theories explain why period farts happen. A lot of it has to do with why farts smell in the first place.

Farts are a "healthy, natural, and normal byproduct of digestion," Ana Tuyama, MD, a gastroenterologist with New York Gastroenterology Associates, told Health. Passing gas is just like burping—it's a way for gas to leave the digestive system.

Though accidental farting can embarrass you, it doesn't usually mean something's wrong with your health—even if it's stinky.

"Smelly gas is usually the result of bacterial fermentation of food/stool matter in the colon," said Dr. Tuyama. Normal gut bacteria feast on the foods you eat and produce stinky sulfur-containing compounds.

"Smelly gas is often associated with consuming a fiber-rich diet that includes foods high in sulfur," said Dr. Tuyama. And plenty of healthy veggies fall into this category.

What Farts Can Tell You About Your Health

Why Gas May Be Worse Before Your Period

As ovulation approaches—roughly day 13 or 14 of your menstrual cycle—levels of the hormone progesterone begin to rise "in preparation for a possible pregnancy," Texas-based OB-GYN Heather Bartos, MD, told Health.

During pregnancy, progesterone contributes to a "lazy gut," noted Dr. Bartos. This results in constipation, burping, and morning sickness. But if you don't get pregnant, the GI floodgates open during your period.

"It's not your imagination if you get diarrhea when your period first starts," said Dr. Bartos. During PMS week, "everything was held in" by progesterone, noted Dr. Bartos, and so it will begin exiting by the time your period starts.

Compounds called prostaglandins are also released when you get your period; they prompt the lining of the uterus to shed, said Dr. Wain. Prostaglandins cause period cramps and make smooth muscle "more motile," added Dr. Wain.

In simpler terms, prostaglandins don't just make you feel pain from uterine cramps; they also get your colon moving—leading to farts and loose stools.

"In the digestive tract, prostaglandins can cause smooth muscle contractions leading to enhanced gastrointestinal pain, distention, and sometimes diarrhea," said Dr. Tuyama. What's more, when prostaglandin production goes up, bloating and farting do, too.

What You Can Do When You're Gassy Before Your Period

If period farts bother you, try consuming primarily unprocessed whole foods in the days leading up to tampon time, said Dr. Bartos. Processed foods have been associated with constipation, diarrhea, and IBS—all of which can cause or come along with gas.

You might also want to avoid foods with sweeteners ending in "-ol" (e.g., sorbitol).

Certain foods (e.g., dairy) upset your stomach? Consider eliminating your intake of those foods within one to days before your period. But note that your symptoms may not improve by not consuming these foods because the gas is hormone-related.

Still, aiming to eat more plant-based foods could have its benefits. "Going cleaner with your diet, gas tends to get better, plant-based foods tend to move better through the system, and you can feel like your symptoms are nearly gone," explained Dr. Bartos.

And don't be too embarrassed or nervous to talk to a healthcare provider if you think something more serious could be behind your gas.

But if you're pretty confident you're dealing with normal, albeit extra smelly period farts, there's really no reason to do anything about it.

Gas is one of the symptoms of PMS and is a product of digestion but also hormonal changes. Specifically, the hormones estrogen, progesterone, and prostaglandin can all play a role in why you might be gassy before your period.

Still, there are actions you can take, like changing what you eat, to help ease any gas you may have before your period.

Thanks for your feedback!
Tell us why!
Sources
Health.com uses only high-quality sources, including peer-reviewed studies, to support the facts within our articles. Read our editorial process to learn more about how we fact-check and keep our content accurate, reliable, and trustworthy.
Related Articles
Butt Cramps on Your Period: Why It Happens and How To Ease the Pain

How Do Hormones Cause Belly Problems? 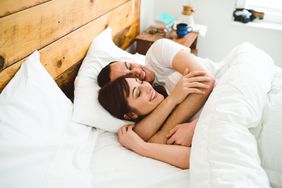 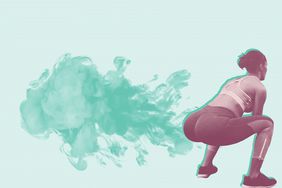