What Is Tendinitis? Experts Explain This Painful Condition

Tip: You definitely shouldn't try to push through the pain while exercising.

Feeling pain and soreness after working out isn't always a red flag—sometimes, it's simply the reward you get for a good workout (or your body's way of reminding you of the importance of stretching).

However, if pain in a certain area persists, you could be suffering from tendinitis (sometimes referred to as tendonitis), which occurs when a tendon—which is a flexible piece of tissue that connects bone to muscle—becomes inflamed.

Luckily, there's good news: If caught early, the treatment for tendinitis can be fairly simple—but the keyword is "early" here; if you ignore the pain and wait too long, you could wind up with something that may require a lot more treatment, like surgery. Here, you'll find out what you need to know about tendinitis, including how it feels, what causes it, and what you can do about it.

What exactly is tendinitis?

Tendinitis is inflammation of a tendon in the body, typically in the shoulders, elbows, wrists, knees, and heels, according to the Cleveland Clinic. The condition occurs as a result of overuse, Dominic King, DO, an orthopedic surgeon at Cleveland Clinic, tells Health. When you do a certain movement over and over again, the affected tendon can become swollen. "Tendinitis comes on [when] you're asking too much of the tendon," says Dr. King, explaining that this causes swelling both around and inside the tendon.

Because tendinitis is often caused by repeated movements, it's most commonly associated with sports injuries—many of the alternate names for tendinitis include "tennis elbow," "swimmer's shoulder," or "jumper's knee." Additionally, tendinitis might occur with age, as tendons lose their elasticity, according to MedlinePlus, a resource of the US National Library of Medicine.

If you push through the pain of tendinitis, you can actually end up tearing your tendon, John Kennedy, MD, an orthopedic surgeon at NYU Langone, tells Health. "The tendon is like a small rope with many strands wrapped around one another," says Dr. Kennedy. "These strands are stuck together with tiny bonds or cross links. As the inflammation continues, these cross links can [create] micro-tears." This is among the reasons you really shouldn't try to push through the pain: "Over time these coalesce to form larger tears. Therefore, tendinitis should not be ignored," says Dr. Kennedy.

3 Weird Causes of Back Pain

What are the symptoms of tendinitis—and where does it usually strike?

The main symptom of tendinitis is pain, and most patients report experiencing it locally, where the inflamed tendon is, says Dr. King. Other symptoms, per MedlinePlus, include:

How is tendinitis diagnosed and treated?

Your doctor might suggest a steroid injection, to alleviate pain, or trying an over-the-counter pain reliever like ibuprofen or aspirin, per MedlinePlus, which adds that surgery is recommended in rare cases "to remove inflamed tissue from around the tendon."

Dr. Kennedy adds that newer treatment methods include the use of a device available at your doctor's office that increases blood flow to the affected tendon via sound waves. "This accelerates tendon healing rapidly and has cut down rehab times to a matter of weeks typically," he explains.

The bottom line here is this: You really shouldn't just cross your fingers and hope you're your tendinitis will go away on its own. "Pushing through the pain is not a strategy for success in this condition," says Dr. Kennedy.

How can you prevent tendinitis?

Fortunately, there are a number of ways to make sure you don't develop a severe case of tendinitis. For starters, pay attention to any changes you make in your workout routine. "If you're going to increase intensity, duration, [or] weight—really only change one at a time," says Dr. King.

It's also a good idea to switch up your workout routine, if you can, giving all your muscles time to develop. That way, the focus isn't on one specific area of the body (such as your hips or shoulder) for too long.

And even if you suspect you're already suffering from tendinitis, you can still prevent a severe case of it by seeking treatment the second you notice the pain in any given area isn't going away. Doing this can also prevent tendinosis, a condition that's caused by repeated rounds of tendinitis, advises Dr. King. 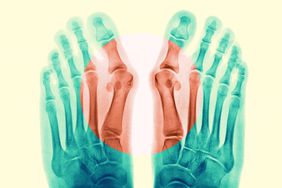 What Causes Bunions? What to Know About This Painful Condition 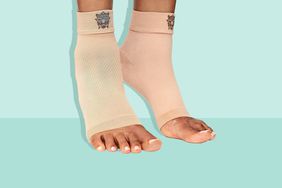 Shoppers Say These $12 Compression Socks Provide 'Instant Relief' From Plantar Fasciitis Pain
How Long Can You Go Without Pooping? Here's What Gastroenterologists Say 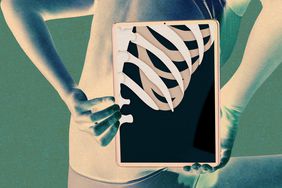