The CNN anchor shared the news Monday on her TV show.

Veteran CNN journalist Christiane Amanpour surprised fans on Monday by sharing some personal news: She, "like millions of women around the world," has ovarian cancer.

Amanpour, 63, said she's "confident" that she will have a positive outcome, before urging viewers to take care of themselves. "I'm telling you this in the interest of transparency, but in truth, really, mostly, as a shoutout to early diagnosis," she said. "To urge women to educate themselves on this disease; to get all the regular screenings and scans that you can; to always listen to your body; and to of course, to ensure that your legitimate medical concerns are not dismissed or diminished."

Amanpour didn't go into much more detail than that regarding her diagnosis and treatment, so we can't speak to her specific kind of ovarian cancer or the exact treatment plan she's on, but here's what you need to know about the disease, including symptoms, causes, and treatment options in general.

What is ovarian cancer, exactly?

Ovarian cancer is a group of diseases that originates in the ovaries, the female glands where the eggs form and the hormones estrogen and progesterone are made, according to the Centers for Disease Control and Prevention (CDC). Ovarian cancer may also be in the fallopian tubes, the structures that move your egg from the ovary to your uterus each month, or the peritoneum, the tissue lining that covers organs in your abdomen, the CDC says.

The ovaries are made up of three kinds of cells, and each can develop into a different type of tumor, according to the American Cancer Society (ACS):

Ovarian cancer is the second most common gynecologic cancer in the United States, according to CDC data, with 19,679 new cases diagnosed in 2018.

What are the symptoms of ovarian cancer?

Ovarian cancer symptoms can be easily confused with signs of other issues. However, the ACS says that these symptoms are the most common, and when they're caused by ovarian cancer, they tend to be persistent and a change from your normal:

The ACS stresses that these symptoms are more likely to be caused by other conditions. But, if you're experiencing these symptoms more than 12 times a month, it's time to see your doctor to get checked out.

The risk factors that may make you more at risk for developing epithelial cancer specifically, per the ACS, include:

How is ovarian cancer treated?

There is a range of treatment options available for ovarian cancer, and treatment is often based on the type of ovarian cancer, its stage, and other circumstances. However, the ACS says that most women with ovarian cancer will have some type of surgery to remove the tumor and possibly her ovaries, uterus, and fallopian tubes. This is also known as a localized treatment, that treats the tumor without affecting the rest of the body.

Depending on the type of ovarian cancer and how advanced it is, other systemic treatments—meaning therapies that can reach cancer cells elsewhere in the body—may also be used. Those can include hormone therapy, targeted therapy, or chemotherapy, like Amanpour said she is currently undergoing.

Amanpour thanked her viewers and fans for their "incredible support," and told them that she is "riding your wave and it will carry me through." 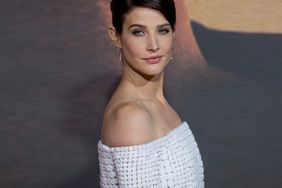