Ovarian cysts are common and largely harmless. But in some cases, they may cause problems or indicate other conditions.

Typically, the menstrual cycle functions like a well-regulated system.

Roughly every month, your ovaries prepare to ovulate one egg. Hormones stimulate ovarian follicles, or sacs containing immature eggs. But only one of those follicles fully matures. It grows bigger and bigger until it eventually bursts and releases the egg.

But there are hiccups in every organized system. And the menstrual cycle is no exception. For example, the follicle may not burst, instead trapping the egg cell. That is often the scenario that causes ovarian cysts.

Although they are harmless, some cysts may cause pelvic pain and spotting. Others also indicate polycystic ovary syndrome (PCOS) or ovarian cancer. Here are 10 facts you need to know about ovarian cysts—including why they develop and how to treat them.

In actuality, ovarian cysts are quite common and rarely cause problems.

"Your body basically sets you up to get ovarian cysts," Mary Jane Minkin, MD, clinical professor of obstetrics, gynecology, and reproductive sciences at the Yale School of Medicine, told Health.

In most cases, unreleased eggs cause the follicle to inflate and develop into a cyst. Or, you may develop a corpus luteum cyst, a cavity that forms after the follicle ruptures and releases the egg.

Sometimes, those cysts bleed, sometimes causing pelvic pain and spotting between periods. However, those symptoms also commonly occur during the normal ovulation process. In fact, many people who develop cysts may not even know that they have them.

Cysts usually disappear within a few weeks and are fairly small. To be considered a cyst, the growth must be at least three centimeters. In contrast, a few millimeters to one centimeter is the size of a normal ovarian follicle. Although rare, it's possible to have a large cyst that measures as big as 15 to 30 centimeters.

There Are Other Types of Ovarian Cysts

Although they are less common than follicle and corpus luteum cysts, other ovarian cysts include dermoid cysts, endometriomas, and cystadenomas.

Dermoid cysts are made up of germ cells, which are the cells that give rise to immature eggs. They are not common, noted Dr. Minkin, but they can grow larger than other cysts.

And since dermoid cysts contain the genetic material necessary for human life, you can find hair and teeth inside them, explained Dr. Minkin. Normally, they don't cause problems, but a healthcare provider may surgically remove dermoid cysts that are especially large.

Endometriomas develop due to endometriosis, which causes the tissue that normally lines the inside of the uterus to grow outside of the uterus. And cystadenomas are benign fluid-filled sacs.

They Usually Do Not Cause Symptoms

Ovarian cysts are harmless. They usually do not cause symptoms or changes to your normal menstrual cycle.

In rare cases, you may notice fever, nausea, and vomiting. Those are signs that you may have an infection. If you experience severe symptoms, you should consult a healthcare provider as soon as possible.

Another scenario that worries healthcare providers, explained Dr. Minkin, occurs when a cyst causes the ovary to "twist." Also known as adnexal torsion, the twist cuts off the blood supply to the ovary and causes permanent damage.

Although adnexal torsion is uncommon, it is a medical emergency. You should immediately consult a healthcare provider if you feel sudden pain in your abdomen and become nauseous.

A Gynecologist Can Diagnose Ovarian Cysts

A gynecologist may discover ovarian cysts during a routine check-up. Healthcare providers typically locate large cysts while performing a pelvic exam or spot them during a transvaginal ultrasound.

But if you experience pelvic pain or other symptoms of ovarian cysts, you may seek an additional visit outside of a regular wellness visit to the gynecologist.

"Most of the ovarian cysts I find [in my practice] are from patients who tell me they're experiencing pain," noted Dr. Minkin.

Things Your Period Can Reveal About Your Health

An Ultrasound Can Take a Closer Look Inside of Your Ovaries

Often, healthcare providers confirm ovarian cysts after conducting a transvaginal ultrasound. A thin device covered in gel and inserted into the vagina allows a healthcare provider to view your internal reproductive organs. The device creates sound waves that translate into images. Cysts may visually appear as tiny black dots on those images.

After confirming the presence of cysts, a gynecologist decides whether to remove them surgically. If cysts aren't causing problems, the doctor might continue to monitor them for any changes.

"We try to avoid operating on someone unless we have to," said Dr. Minkin.

One instance in which a gynecologist may surgically remove ovarian cysts is if you are at risk for adnexal torsion, explained Dr. Minkin.

A healthcare provider might also consider surgery if the cyst does not go away on its own, grows up to or larger than 10 centimeters, results in adnexal torsion, or they suspect the mass could be cancerous.

If you need surgery, you will likely undergo one of two common procedures: laparoscopy or laparotomy. Both procedures involve a surgeon making an incision in the abdominal region to remove the cysts.

The Pill May Prevent Ovarian Cysts

The birth control pill may help prevent ovarian cysts if you're not pregnant.

The birth control pill will not help an existing cyst go away faster than normal, according to a study published in 2014 in the Cochrane Database of Systematic Reviews.

Some healthcare providers previously recommended the birth control pill as a treatment option for cysts. However, the researchers discovered a lack of scientific evidence to support that advice. Instead, the research supported careful monitoring of cysts.

Some Cysts Are a Symptom of Polycystic Ovary Syndrome

But what differentiates PCOS from other types of cysts is a hormonal imbalance. In cases of PCOS, cysts produce androgen, a hormone that supports the development of typical male characteristics. So, people with PCOS may notice excess hair growth, acne, and weight gain.

Other symptoms of PCOS include anovulation, irregular periods, and infertility.

They Can Show Up After Menopause

Most people who develop ovarian cysts are pre-menopausal. However, it's possible to develop cysts as you age, especially during your early post-menopausal years. Per one study published in 2014 in Clinical and Experimental Obstetrics & Gynecology, about 18% of postmenopausal women in the United States were found to have ovarian cysts over a 15-year period.

Some Ovarian Cysts May Be Cancerous

Although most are benign, there is a small chance that an ovarian cyst indicates ovarian cancer.

Like many other cancers, your risk increases as you age, noted Dr. Minkin. About half of people who develop ovarian cancer are older than 63. Ovarian cancer is the fifth most cause of cancer-related deaths among women.

If a healthcare provider determines whether a cyst is cancerous, they will conduct a vaginal ultrasound. That test will not prove that the mass is cancerous, but it can help a gynecologist determine whether it's filled with fluid. A solid mass is more indicative of cancer than a fluid-filled one.

How to Detect Ovarian Cancer: What Doctors Want You to Know About the Diagnostic Process

Ovarian cysts commonly occur when the ovarian follicle does not burst and traps the egg cell. Although harmless, ovarian cysts may cause pelvic pain and spotting between periods.

Some ovarian cysts occur due to PCOS or ovarian cancer. So, if symptoms do not subside between periods, it may help to consult a healthcare provider. Also, some cysts cause adnexal torsion, which cuts the blood supply to your ovary. If you suddenly experience severe abdominal pain and nausea, seek immediate medical attention.

What To Know About Ruptured Ovarian Cysts 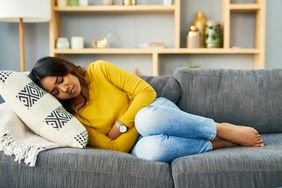 Here's Why You Might Be Spotting Between Your Period
Two Periods in One Month: How Does This Happen?