Is Carbonated Water Good for You?

It's basically just as good as regular water.

People sometimes choose sparkling waters—and carbonated waters in general—as alternatives when they want to cut back on other carbonated beverages. In fact, a September 2020 study published in Medicina noted that there was an increased demand among Americans for sparkling water within a 10-year timespan for that reason.

With this in consideration, you may be wondering about what ingredients are in different carbonated waters as well as the benefits of drinking carbonated water overall. To find out more about this type of water, we talked to Atlanta-based nutritionist Marisa Moore, RDN.

What Types of Carbonated Water Are There?

Seltzer—which is also called sparkling water—is carbonated artificially and has bigger, sharper bubbles. It contains no ingredients other than water. But some brands (like Polar, Canada Dry, and Schweppes) sell varieties that are flavored naturally with lemon and lime.

Club soda is essentially the same as seltzer with a few additions. Ingredients like salt, potassium bicarbonate, and potassium sulfate give club soda its salty, mineral taste. But the distinction in taste is minimal, and many people don't notice it. You can find club soda sold by brands like Schweppes and Canada Dry.

Carbonated water that is similar to club soda would be tonic water. This water too contains added minerals, but the primary difference between the types of water is the addition of quinine in tonic water. Although it has been historically used in the treatment of malaria, quinine is added to tonic water to give it flavor—according to a February 2021 Organic Letters article. Brands such as Canada Dry, Schweppes, and Seagram's provide tonic water options.

Is Carbonated Water As Beneficial as Flat Water?

Yes, it is, Moore said. A glass of carbonated water contributes to your daily fluid needs. Per the CDC, sparkling, seltzer, and flavored waters can be added as part of a healthy diet. Carbonated water is also a great alternative for anyone trying to kick a soda habit: You get the same pleasant fizz without the calories and health risks associated with both regular and diet soda (think weight gain, diabetes, high blood pressure, and heart disease).

Is It True That Carbonated Water Can Erode Your Bones?

It can, however, have an effect on your teeth. When water is carbonated, carbonic acid forms, lowering its pH. According to a Journal of the American Dental Association study published in December 2015, dental erosion can occur when teeth are exposed to environments with less than a pH level of 4.0. Thus, consuming acidic drinks (like some versions of carbonated water) can cause your tooth enamel to erode, which may lead to sensitivity and cavities.

Just because a beverage is clear, fizzy, and has zero calories, that doesn't mean it's carbonated water.

There are some diet sodas that are marketed as seltzer even though they contain artificial sweeteners. The only way you can determine what you're drinking is true seltzer water is by taking a peek at the ingredients. If you see that it contains any chemicals like aspartame, it's not carbonated water.

However, there are ways to add a little sweetness or some flavor to your carbonated water. You can always add fruit or herbs, like mint, to your beverage without overloading the drink with extra calories.

Ultimately, carbonated water can be a good choice if you want to stay hydrated and avoid sodas—without having to stick to flat water. 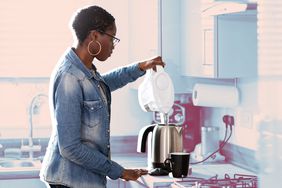 What Causes Bloating? 16 Reasons You May Feel Bloated, and What to Do About It
The 9 Best Mouthwashes for a Healthier Mouth, According to Dentist Guidelines
Ultra-Processed Foods to Replace Right Now