We break down what to look for in your teeth whitening pen, along with the top picks for sensitive teeth, stain removal, and fast results.

Prepare yourself for a harrowing tale: Once upon a time, teeth whitening required thousands of dollars and regular visits to your dentist. Sounds awful, right?

Thankfully, at-home whitening products now make it possible to achieve pearly whites on a budget from your living room. By using lower dosages of whitening agents—typically hydrogen peroxide—than your dentist, oral care companies have developed safe formulas that can be used without professional supervision (or the threat of damaging your enamel).

One such invention: the teeth whitening pen. The daily treatment incorporates slow-acting bleaching agents that can safely stay on the teeth for long periods of time. Most pens use carbamide peroxide, which is a combination of urea and hydrogen peroxide. It whitens the teeth slower than hydrogen peroxide, but this actually helps prevent tooth sensitivity and gives the product an even longer shelf life.

Here are 10 of the best teeth whitening pens you can buy on Amazon:

Most pens have foolproof designs that release whitening gel directly onto an application brush. Your only job is to paint the gel onto each tooth (avoiding the gums) like you're Picasso. Once applied, most gels dry in a matter of minutes, letting you return to your busy schedule. The epitome of convenience, the compact pens can typically hold over 20 treatments to gradually brighten your smile.

Like all whitening products, it's important to keep an eye on its percentage of bleaching agents. Scott Cayouette, DMD, a Charleston, South Carolina-based dentist, previously told Health that he generally recommends "a product [that] contains between 10% and 12% hydrogen peroxide." A carbamide peroxide-based product can safely contain about 35% of the ingredient to fall within Dr. Cayouette's recommendation.

Whether you're looking for a fast-acting pen that improves your smile in just one treatment or you're seeking out a peroxide-free product, we've found the best teeth whitening pen for your needs. Learn more about our top 10 picks—all available for under $50 on Amazon—below.

This pocket-sized pen is packed with a powerful dose of carbamide peroxide that effectively whitens teeth without causing sensitivity. Safe to apply twice a day, it can remove years of stains for a smile that's at least four to eight shades brighter. Each pen contains enough whitening gel for more than 15 applications, with the pen's clear design letting you track when it's time for a replacement. Best of all, the gel dries in just 60 seconds, so you don't have to interrupt your busy schedule for a quick treatment. No wonder it's earned more than 2,500 five-star reviews from buyers claiming it's not only the "best pen," but "the best whitening product out there."

If your teeth are in a constant battle between sensitivity and stubborn stains, meet your new best friend. These carbamide peroxide-powered pens earned rave reviews from buyers who saw a noticeable change in their smile without the sensitivity associated with bleaching. The daily treatment requires a quick twist of the five-inch pen—which holds enough product for more than 20 treatments—followed by a very thin, even application of whitening gel to each tooth. Even if you don't struggle with sensitivity, it's worth keeping this pick in mind: Almost 80% of reviewers have given it five stars.

Getting pearly whites shouldn't take an eternity—and this pen is proof. The whitening gel dries in just 30 seconds post-application, so you won't have to plan your entire day around a treatment. Instead, you can toss the compact pen into your purse or pocket and apply when it fits into your hectic schedule. Each package comes with two pens filled with more than 20 treatments each to give your smile a complete makeover in a matter of days. Naturally, it's already earned more than 13,400 five-star ratings from buyers who say it provides "instant whitening [at] a great price."

Most at-home whitening products don't contain a high-enough dose of hydrogen peroxide to permanently damage your tooth enamel; however, this pen isn't taking any chances. Its whitening formula skips peroxide in favor of baking soda, aloe juice, pomegranate extract, and chamomile extract for a gentler whitening experience. You will have to leave the treatment on for longer—the brand suggests a 15-minute waiting period followed by a quick rinse—but reviewers say you won't deal with gum irritation or a bad taste. Deemed a "total game changer" by one buyer, it won't have a dramatic whitening effect overnight, like peroxide, but it will lead to a brighter smile with continued use.

Colgate is a leader in the oral health space for creating innovative and effective products—and its overnight teeth whitening pen is no different. It brightens the teeth as you sleep with a rapid-dry whitening formula containing 3% hydrogen peroxide. The unique serum is designed to stay on teeth overnight but easily brush away in the morning before you start your day. Factor in the pen's ability to remove up to 15 years of stains in just one week, according to the brand, and it's no surprise the treatment is an Amazon best-seller with more than 5,400 perfect ratings.

Pens are designed for safe at-home usage with a slow-acting formula that stays on your chompers for an extended period of time. While that's great for protecting your enamel, it might mean that tackling stains takes longer than desired. To help speed up the process, Fairywill pairs its pen with a high-tech nano sponge that scrubs away plaque and build-up. In fact, the feature is so helpful that one reviewer dared to call it "the secret to the success of this whitener."

The convenience of whitening on the go is a huge sell for pens, but sometimes you want to expedite the whitening process. By using a pen with a dual LED light—in this case, a mouthpiece with both red and blue light bulbs—you can see visible results in just one treatment. Unlike other lights, which take away from the pen's adaptable nature, this kit's included LED actually plugs into your phone via USB to maintain a travel-friendly design. Between its speedy results and budget-friendly price tag, we're not too surprised this kit has accumulated more than 1,000 positive reviews.

Unlike strips or trays, the whitening gel applied with pens stays on your teeth—and inside your body—all day long. Keep it clean by opting for this USA-made organic formula crafted without sulfates, parabens, gluten, or polyethylene glycol (PEG). It still has the 35% carbamide peroxide quantity seen in competitors' formulas, but it ditches questionable additives and animal testing. So not only will your smile become two to eight shades brighter, but you'll actually feel good about doing it. One reviewer summed it up: "I previously used other teeth whitening products in my heyday but have converted to an alternative, healthier lifestyle, so I got really excited when I saw that this was vegan. I can definitely see a difference in whiteness and like that my teeth don't get crazy sensitive from it."

We all want a Hollywood-worthy smile without the price tag, and this affordable find doesn't disappoint. The pen has the same amount of whitening agent as its competitors on this list, but it costs less than $10. It's also pH-neutral—tooth enamel can decay when mouth acidity drops too low—so you won't have to worry about creating a breeding ground for rot. While it hasn't earned as many reviews as other products listed here, its modest collection of almost 400 five-star reviews includes statements like "best whitening method ever" and "one of the best I've used."

The lingering taste of hydrogen peroxide is terrible, and this flavored pen is determined to put an end to it. The enamel-safe whitening gel is flavored with peppermint to ensure your one-minute treatment won't lead gagging or discomfort. At least 20% of users called out the pleasant taste while simultaneously praising the efficient pen for giving them a whiter smile without tooth sensitivity, pain, or gum irritation. 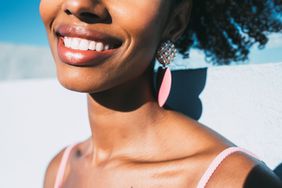 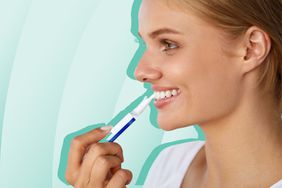 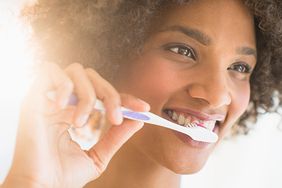 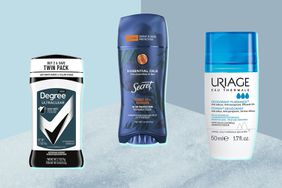